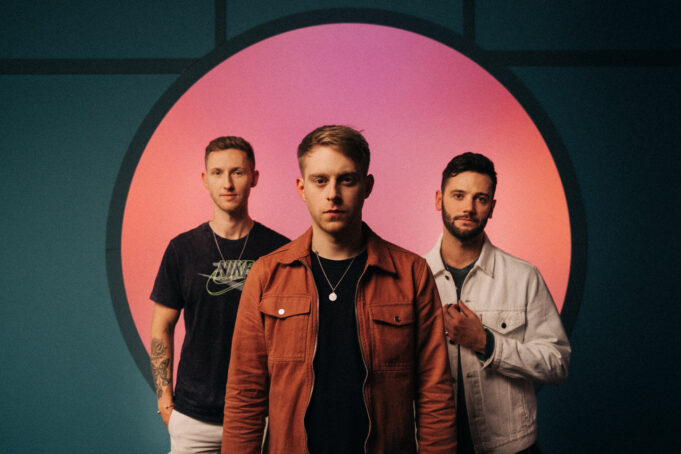 For a band whose music so often celebrates the beauty in life’s most challenging moments, even Flawes have had their patience tested in 2020. The dynamic electronic pop trio started the year on a high by fulfilling a life-long ambition with the release of their debut album ‘Highlights’. But events would mean that their big plans for the rest of the year were dashed.

Having spent most of 2020 on lockdown, Flawes have used this time to become even more creative than ever before. From writing and recording individually yet still collaboratively, it gave them a refreshed sonic identity. ‘Holding Out For The Win’ is the trio’s first track from their upcoming EP ‘Reverie’ – out February 26th via Red Bull Records.

I chatted to JC, Huss and Freddie about their new music, songwriting and being creative in 2020.

JC: I went to high school with Huss and then we randomly bumped into each other in London about 6 years ago when I first started writing for Flawes. Then I met Freddie through a mutual friend, and after one rehearsal together, that was it, we’ve never looked back.

What inspired you to create ‘Holding Out For The Win’?

JC: ‘Holding Out For The Win’ was written when reminiscing looking back at the exact moment I realised I had fallen in love. It’s a really exciting moment that I don’t think I’d ever consciously thought about and explored before. The song documents that moment and comes to the conclusion that there is something to be lost and that it’s going to be worth keeping a hold of.

JC: I always try not to put any rules on the creative process and try to keep it as open as possible. Sometimes it will be a vocal melody and a few chords that I come up with and send to the boys to develop, or a loop Freddie has come up with which I write a vocal melody on top. Other times we’ll start from the bottom up with a drum beat huss sends over. All three of us use logic so it’s quite handy to pass projects back and forth between us.

What’s the biggest difference in terms of writing and recording your upcoming EP ‘Reverie’ compared to your previous work?

Huss: Reverie was all written, recorded, produced and mixed remotely, which was definitely a challenge to get our heads around at first. We each had to set up home recording studios (I had to do some serious sweet-talking to the neighbours about the drum noise haha) It was great though, we all learnt so much, I wouldn’t change a thing. This approach has given the EP a different sound. You can really hear the individuality in each of our parts, which I love.

Is there one track from ‘Reverie’ that you hope will be a fan favourite?

Huss: We’re really proud of every song on there, but I have a feeling the next single we’re going to release is going to tickle quite a few peoples fancies (hopefully). It’s definitely one of the biggest songs flawes have ever created and it’s going to be one of the biggest in our live set too! Lots to look forward to!

When you release new music, how do you know when it’s ready to release into the world? Do you feel nervous or excited?

Freddie: I think certain songs naturally work well together, so sometimes it’s the case that we wait until we have a batch of songs that really feel like a body of work. That’s definitely what happened with Reverie – the songs just felt good when played back to back! There’s always a sense of anticipation ahead of a release for us. We’re always proud of what we put out so waiting on what the fans think can be pretty nerve-racking!

We know you guys like many other musicians have had to cancel tours and change upcoming plans.  How is it affecting you? Do you think it’s changed your view on music?

Huss: Honestly, I think it’s made us more productive. Reverie wouldn’t exist if what happened this year hadn’t happened. Being a musician teaches you to have a lot of patience in general, 2020 is just something we’ve all had to accept. It’s the huge lemon we’ve all had to try and make some lemonade with. I wouldn’t say my view on music has changed… but things feel different for sure and I think it will take us quite a while to get back to where we were. But you just have to improvise, adapt and overcome!

Is there one track you’ve previously released that now has a different meaning?

Freddie: Our debut single ‘Don’t Wait For Me’ was such an important song for us as a band; it really kicked off our career! At the time of release, we mainly appreciated it for the song it is but in hindsight it’s a reminder of how far we’ve come and how much our sound has developed.

What’s been the biggest Rockstar moment you’ve had since starting your career?

Huss: There’s definitely one that stands out for all 3 of us, we’d just landed in LA and were having breakfast with our A&R and the head of the record label… when all of a sudden Sir Patrick Stuart walks in and sits down on the table next to us. Being that 66.6% of flawes are from Huddersfield we HAD to go and say hello. He was absolutely lovely, we chatted for about 15 minutes then went to collect our bags (and let him have his breakfast in peace) So we walked out of the restaurant… and there’s Sir Patrick Stuart, stood outside waiting for us. He asks, “do you mind if I have a picture with you?” haha. It goes without saying we said ‘sorry no photos please’ and jumped in our cab. (I’m joking, of course, we took the picture and plastered it all over, I think I called my mum and Freddie almost fainted) That was a good day for sure.

JC: Before Flawes began the three of us all used to be session musicians for other Pop artists. I used to be Ella Eyre’s keyboard player, Huss played the drums for Mahalia and Freddie played the guitar for Status Quo. We got to perform around the world and got a passenger seat view into the life of a pop star.

Freddie: It would have to be ‘Sledgehammer’ by Peter Gabriel! I’m not entirely sure how or why it happened but it’s the song we always play before walking on stage. What a tune!