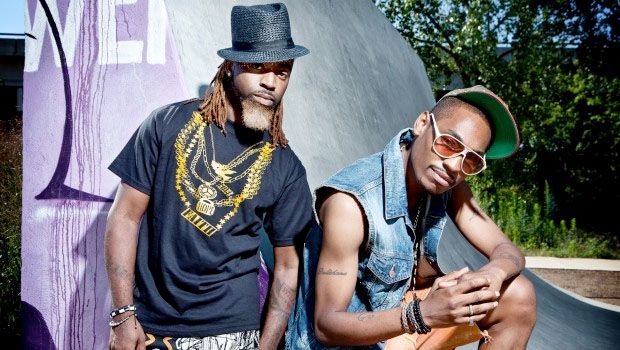 From ‘Salt Shaker’ to ‘Badd’ and ‘Get Low’ with Lil Jon, Kaine and D-Roc of Ying Yang Twins have always had us getting crunked. Play one of their records anywhere and witness what happens. Once their voice begins to whistle through the speakers, people far and wide will undeniably start getting down. They sustain that feel good, booty-shakin’ effect on people—the same way how we feel when Beyonce struts her stuff.

Time flies, but 10 years ago today, Ying Yang Twins broke into the game with their 2003 platinum-selling, signature album ‘Me & My Brother’. And as if the summer couldn’t get any hotter, they’re back with a brand new album for 2012 accompanied by their new single ‘Fist Pump, Jump Jump’. They speak exclusively to Noel Phillips about being fans of Justin Bieber, hustling on the streets and why they are not one-hit wonders.

Looking back at when you first started out in the music business, how do you think you’ve transformed to now as an artist?

We were both young when we first started, and at the time we were just in it to get crunk, now we are businessmen and more grown-up.

I have to ask this question because a lot of ladies out there would slay me if I didn’t: are you both settled down with families or are you still living the single life?


D-Roc is married with kids, whilst I’m [Kaine] in an on/off relationship.

You’re musical sound tends to mainly surround partying, sexual and relationship themes. Why is that?

We enjoy making real life music. We don’t like to rap about what things we have. This is why we just come with our party, sexual and relationship themes.

Over the years, you’ve worked with several big names including Wyclef Jean, Lil Jon and Britney Spears. Are you still in touch with any of those guys?


We are only still in touch with Lil’ Jon, but not everybody else.

Speaking of Britney Spears what are your thoughts on her being selected as a judge on X Factor USA? Do you think she will do well?


We are actually still a fan of hers and think she will do great.

What is it that keeps you going as Ying Yang Twins?

We are always forever going to be the YYT. We like making music, so we keep it coming.

How are you finding the response to your unlikely appearance on the remix of ‘Boyfriend’ featuring Justin Bieber?

Everybody was asking for us to do it, so we knew people would like it. Even though, no matter what you do you’re going to always have haters out there, but we feel good about it.

Are you fans of Bieber?

We didn’t work in the studio with him, we actually did it ourselves and put the remix out there in the streets.

Was it at all difficult adding your usual crunk flavour?

Not at all! We do what we do all the time and do it well.

So the meaning behind ‘Yin Yang’ is an ancient Chinese understanding denoting that, “everything has a balance of some good and some bad in it.” What’s the most awful thing you guys have ever done?

We have done our fair share of terrible things, but one that I would say is when we were in the streets hustling’.

How did your name come about?

You guys have managed to remain in the game for a long time now, but what are your thoughts on being called a novelty group and a one-hit wonder?

We don’t think about it at all, because it’s not true. We’ve had more than one hit, so we don’t even indulge in that nonsense. So you have an album in the pipeline. Can you tell us what we can expect? Also, who will be featured with you?


Yeah, we are doing an album with D.J. Teddy O from Germany, which is called ‘All Around The World’. There are not many features like that, but it is jamming.

Tell us a bit about the first single, which is about to be released…

We just did the single which is called ‘Fist Pump, Jump Jump’ produced by Red One and Ike Dirty, so check that out on iTunes and YouTube right now.

If Ying Yang Twins had their own merchandise, what would they consists of?

Literally everything from shoes, perfumes, alcohol, clothes, and whatever else we can think of.

The single ‘Fist Pump’ produced by RedOne is now available on iTunes.