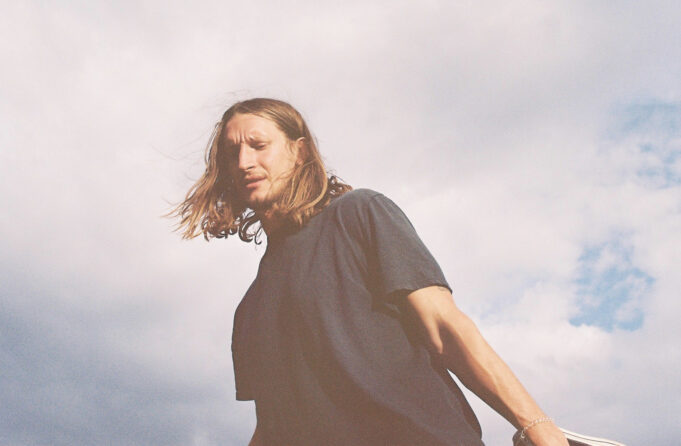 Raised in a bucolic rural town in England, Childe began writing music as a teenager, deeply inspired by great storytellers like Tracey Chapman and Bright Eyes. He picked up piano and guitar and eventually was enrolled in the legendary performing arts BRIT school, with alumni including FKA Twigs, Amy Winehouse, Rex Orange County and King Krule. It was there that he was able to find community and collaboration with other artists. He went on to open dates for King Princess and hone the sound you hear in Childe.

We chatted to Childe about his new electro-pop track ‘Just Me‘.

What inspired you to create ‘Just Me’?
I was spending time in the wrong places with some bad people – it’s about needing to get away and having your own time.

What’s your favourite lyric from ‘Just Me’?
‘Never stopped acting like seventeen’.

What’s your songwriting process like? Do you do anything to get into the zone?
I’ve started doing some Wim Hof inspired hyperventilating thing which definitely gets me going. I don’t know how helpful it is for the writing process but it feels great.

How would you describe your sound?
Experimental pop.

Who would be your dream collaboration and why?
Imogen Heap because I don’t think she would ever run out of ideas, or Frank Ocean because he’s the truth.


You’ve previously supported King Princess on tour, what was that like? Do you have any pre-show rituals?
She has a really progressive, music-loving fan base and she’s a proper artist making music that will stick around for sure. My ritual is to drink Jack Daniels, which I never do in my actual life.

What has been your most embarrassing on-stage moment?
I’m still waiting for it – I’ll make sure it’s something terrible though.

What’s your first proper music-related memory?
Learning to play ‘what shall we do with the drunken sailor’ on a Spanish guitar with my mum. 5 years old.

Is there one thing you’d like to achieve within music?
Go on tour for the rest of my life.

What would the theme tune to your life?
50 ways to leave your lover.