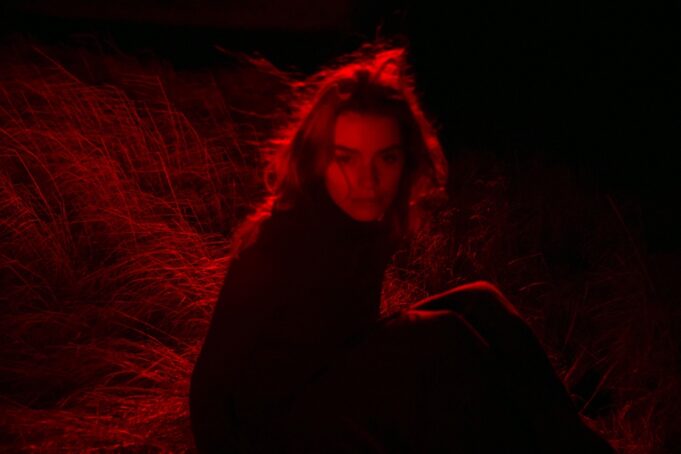 Hailing from the remote town of Blönduós in the north of Iceland, Eydís was drawn to music from an early age. She began studying the piano at aged six and wrote her first piece of music as a seven-year-old.

Having abandoned her plans to become a professional classical pianist, she instead moved to London and New York, where she worked various jobs while focussing on developing her language as a composer. She returned to Iceland in 2020 to record her debut album, BYLUR, which is out now.

We chatted to Eydís Evensen about her debut album.

I started practising music at the age of 6, then later started composing piano music at the age of 7. I remember being 13 years old and I was watching a television commercial featuring footage from the children’s foundation of ABC. It overwhelmed me to see such suffering, so I asked myself; how can I help? I then that same year made a homemade CD with 6 piano solo pieces that I’d composed by that time, and that was when I knew that I felt a deeper sense of purpose for composing music.

Did any artists have an impact on the music you create today?

Absolutely. I feel that I’ve been inspired by so many artists of different genres, ranging from classical music, jazz and classical- rock to name a few. I started listening to Pink Floyd, Led Zeppelin and Deep Purple before turning 10 years old, which has since inspired me to this day. I have recently been very inspired by Philip Glass’s musical work and Thom Yorke’s and Nils Frahm’s world.

Tell us about your debut album ‘Bylur’. What inspired it?

Bylur has been inspired by my personal experiences throughout the past 20 years and the emotions which have risen during these 20 years, as well as the natural surroundings growing up in the north of Iceland and the rough weather conditions up north. Bylur includes a version of the very first piece of music I composed, ‘Vetur Genginn í Garð’, at the age of seven. I started composing arrangements when I resided in New York City a few years back, and have since been consistently working on all of the arrangements which can be heard on the album. It’s been an incredible journey of reflecting on my life this way, by releasing these emotions out into the cosmos via ‘Bylur’.

Is there one track on your album that you now regret or see differently?

I would have to say that I feel differently regarding certain emotions which represent a few different pieces on the album, but that to me is the beauty of our constantly changing environment; we may feel differently but the emotions that once occurred will always remain for what they meant to me back then.

I would have to describe my music as to how I feel performing/composing it; a meditative journey with notations flowing from a state of grief, love, melancholia, happiness and wonder.

I love physical activities; specifically hot yoga, snowboarding, hiking, volleyball, skydiving and swimming. I used to be a young professional volleyball player as a teenager which did not always make my piano teacher happy. I would sometimes receive injuries on my fingers which wouldn’t help my musical education. After receiving a very serious injury on my knee, I knew that I would have to put my volleyball shoes on the shelf and focus on music instead which I am incredibly grateful for happening.

Is there anything you’d love to achieve within music?

I’d love to be able to orchestrate on a larger scale, it is a dream of mine to have a whole orchestra performing my music.

I feel that I go through many different moods during each day. To give one example of a theme tune, it would have to be one of the first soundtracks that I ever got into as a teenager. It appears in the film Pride & Prejudice, it’s called ‘Your Hands are Cold’ by Dario Marianelli. The piece has moved me since I first heard it and I listen to it frequently still to the day.

I will be starting to perform across various cities within Europe this fall/winter, I cannot wait to be able to share my music live with an actual audience again.