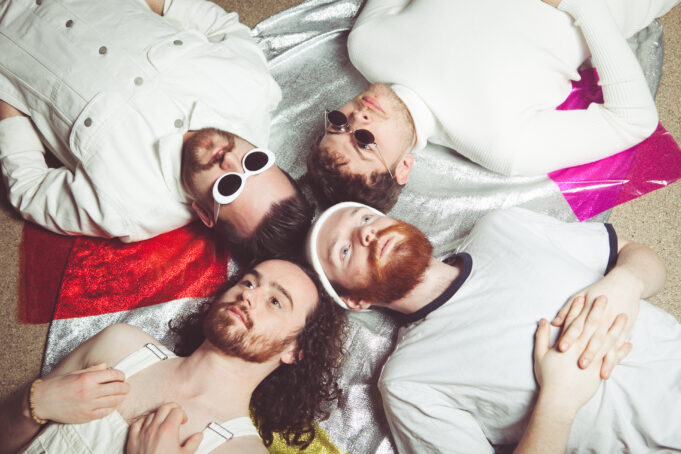 Formed in a cesspit of post-university malaise, TV COMA are a power-pop band based in Brighton. The four-piece is now gearing up for the release of WUSS, their debut full-length album.

More slap-in-the-face than slap-on-the-back, ‘Congratulations’ is a break-up song for the millennial generation. Written immediately after a messy split, the track recounts a fiery farewell with a former lover, while dwelling more deeply on the impossibility of truly escaping an ex in the digital age.

I chatted with TV COMA about their upcoming debut album, dream collaborations and more.

The two frontmen Max and Leo are brothers, so they met the second Max found his way into the world. Apart from that, we all met on this new thing called ‘The Internet’ where we emailed each other back and forth with funny pictures of dogs and people falling off things. Then we decided we wanted to venture into the real world and the only way we could do that was through pure hard power pop.

What’s the meaning behind ‘TV COMA’? Was it a hard decision to agree on the band name?

TV COMA comes from the mind of a man who has been trapped in a damp room for 50 years. He has been educated by only Netflix and YouTube videos of cats running around. He is sponsored by Dominos and is constantly fed pizza. He is socially and morally aware but he hasn’t interacted with a human being for the past 50 years and only understands the world through 1-hour documentaries about whales. He admits he shouldn’t leave empty plastic receptacles on the floor. Towards the end of his life, Dominos will free him into the world, away from his ‘TV COMA.’ He will go for a big walk across some hills and breathe in his freedom. Then he will pull out his smartphone, take a picture of his own face and edit it on Face tune for two hours.

Tell us about your new single ‘Congratulations’. What inspired it?

Leo wrote Congratulations sitting on a muddy curb in Southampton after several beers and a difficult breakup. He mumbled the whole thing into his Blackberry voice memos. The song is about romance in the digital age and how it’s impossible to get over someone when you have a never-ending stream of pictures of their face from all different angles. TV COMA are all bored with their own faces, so we very rarely take pictures of our own faces.

Your upcoming album ‘Wuss’ is out this Autumn. What are some of your favourite memories attached to making the album?

The album took us about a year to make overall during the height of millennial criticism in 2016/2017. It perfectly coincided with leaving university and trying to find a relevant job. The whole album was just relief from the chaos of trying to breach adulthood as a disenfranchised and bewildered millennial. In most of the album we make light of this in a sardonic way, but behind it all there’s a deep melancholy.

On Playstation 1 we used to have a game called Music 2000 in which Leo and I used to make lots of songs and music videos. We used to perform them to our parents. The year was 2001 and that was the first-ever TV COMA performance.

Jamie looks at himself in the mirror and dances with an empty fake smile on his face for about half an hour before every show.

Who would be your dream artist and/or band to support on tour?

We would love to support Indoor Pets, Lauran Hibberd, Jeff Rosenstock, Chris Farren, PUP, Baby Queen, Weezer and Blur, sorry that’s a few but all of them are so great.

What’s one thing you can’t live without?

I think it’s really important to have water, food is also really important. If we were to live with only one thing we would try water for as long as possible then, inevitably, starve to death.

Unwillingly it’s become an endless stream of meaningless, chorusless, pointless songs which are constantly played over speakers in all public places. Some are royalty-free songs, some are actual real musicians.