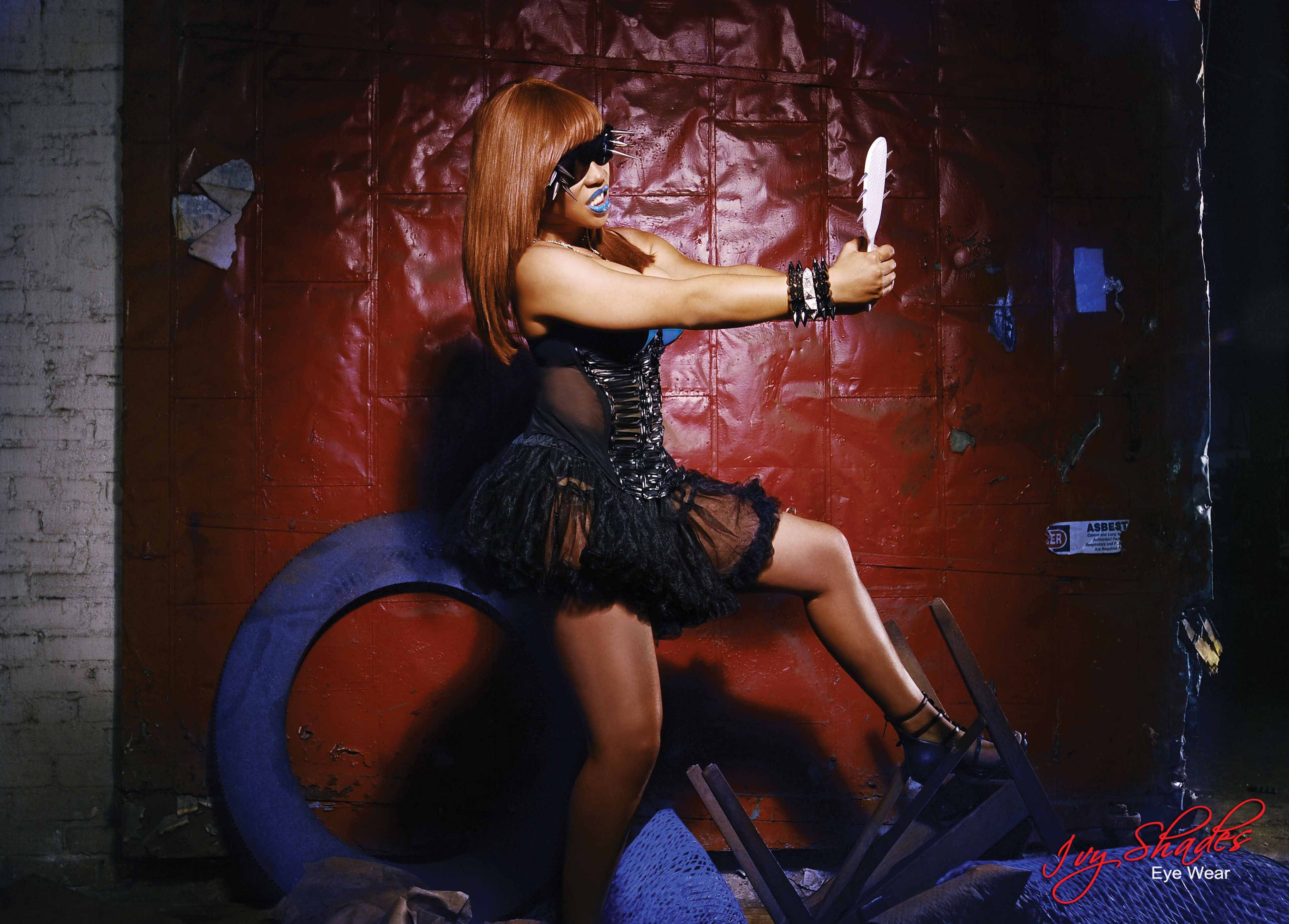 In the last few years or so, we’ve witnessed a new generation of female rappers particularly Nicki Minaj, Azealia Banks and Kreayshawn exploding onto the music scene brandishing their unstoppable talent like an automatic weapon, whilst earning the respect and admiration for their lyrical handiness.

Now gearing up to follow in their footsteps is Stephanie “Ivy Shades” Johnson‏. Not only is this fearless MC ready to unleash her talent to the world, but she has got the credentials as a fashion designer, model and aspiring actress to back her. She tells us her views on music, men and fashion…

Can you talk us through what you’re wearing right now?
I’m wearing Ivy Shades gear from head to toe. Ivy Shades designer racer back top, along with my Ivy shades RockStar Tights. Of course you know I have on my Rockstar first class shades. Ivyshades Clothing is the next quest for my brand.

What’s your key style rule?
There are no rules, if there were I would break them. I just do whatever I want.

When did you make the decision to start pursuing music as an actual career?
Music was actually my first career. I had been an entertainer since I was a teenager, and didn’t think it would become my career. During my time in college, I began working with some talented individuals, and my career took off from there. I still finished school, because I understood the importance of having an education, but music has always been number one.

What’s your musical vision, what would you like to achieve out of all of this?
My musical vision is to promote individuality, and let females know it is okay to be yourself, and who you are is beautiful regardless of what others have to say. Beauty is not defined by how little you wear, but through being yourself. I want women to know success doesn’t mean you have to downgrade yourself, I want to empower women and teach them we don’t have to be the stereotypical crabs in a bucket, but we can promote one another. This is one of the main reasons I have such a huge entourage of women, we are the Female Money Team. Through my success I can provide them with opportunities and assist with them achieving their success using their talent

So you have a wide range of goals and ambitions outside of music?
Yes I have always strived to have multiply ventures. I wanted to release an eyewear line, and I have achieved that. Next is a clothing line, jewelery, perfume, lingerie, shoes, the possibilities are endless. Slow and steady wins the race so I am slowly taking over the game. How do you balance the career as a business woman a, MC and fashion designer?
Simple I put god in the driving seat, and I ride as a passenger, he balances my life and has not failed me thus far.

Tell us about your debut single, ‘Superbitch’?
‘Look up in the sky, it’s a bird, it a plane, naw it’s a super bitch and yall bitches are super lame.’ [Laughs] This song describes my day to day lifestyle. From juggling multiple careers, in order for me to achieve all of the tasks I’m juggling you have to be a superhero, with superpowers. I juggle all of these things, while still being Super Bad.

It seems quite naughty…
[Laughs]… The song is to empower all of the beautiful women out there grinding, we all have super powers. Especially for all those parents out there who are raising kids independently whilst juggling their career, and etc.

You’ve already worked with a few well known people, tell me about Master P!
The time I spent around Master P was a great learning experience. He is so knowledgeable about the music industry, and business. We would often talk and he would always impress upon me the importance of branding, marketing, and making good decisions. He is a phenomenal business man, and I enjoyed the time we worked together.

At what point did you change your name to Ivy Shades? What was it that felt right about it?
I changed my name in 2010 from Poyzen I.V. to Ivyshades. I have always loved sunglasses and it had been an ongoing joke in the studio and it stuck. There was a lot attached to the old name so Ivyshades was like my rebirth and everything about it felt right.

How can a man catch your eye?
At the moment, I’m extremely focused on my career, so it was crazy that two guys would catch my eye and some days I feel so torn between the two. It’s hard to make a decision, but I know one day I will have to. Their names are Benjamin and Ulysses… [Laughs]

Do you believe in love at first sight?
I think anything is possible. However, I can honestly say it has never happened to m, but I guess we will see.