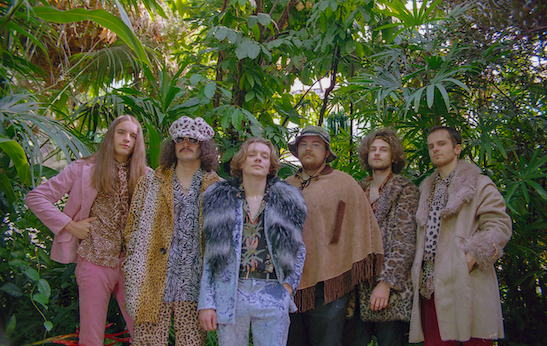 Hailing from the sleepy town of Church Village in South Wales, CVC is here to show you a good time.

Inspired by the likes of The Beatles, Red Hot Chili Peppers, Crosby, Stills, Nash & Young and Snoop Dogg, there’s no doubt that the band’s influences are varied. It all comes together to make the glorious sound that is CVC’s music, and it’s no wonder that the band were nominated for Best Breakthrough Act at the Cardiff Music Awards.

The band’s new single and video, ‘The Mortgage Anthem’, is out now, and the infectious track and its deeply entertaining courthouse-themed video will give you a taste of what’s to come from their incredible upcoming debut album ‘Get Real’.

We chatted to bassist Ben Thorne about their new track, upcoming album and recording in lockdown.

How did you all first meet? Who came up with the band name?

We’re all from Church Village in South Wales and most of us went to school together. CVC was always spray-painted around Church Village so one day I thought it would be a good idea to name the band after it. Then we later decided it would stand for Church Village Collective since now we are more of a family affair.

What inspired you to create ‘The Mortgage Anthem’?

After the pub one night we came home and started playing those chords, and Francesco just started singing ‘I can’t afford a mortgage!’, after a particularly skint period, and so we just wrote the rest of the words around that, about having no money!

What can you tell us about your upcoming debut album ‘Get Real’? Is there one track you’d love to be a fan favourite?

We started recording ‘Get Real’ during the lockdown since we had no gigs to play and recorded it all last summer at rhythm guitarist Elliot’s house. The whole album apart from the drums was recorded in his living room using one microphone, two keyboards, nine guitars, one tambourine, one egg shaker, one thunderstorm, five voices and one violin. The songs on the album contain some of our earliest works and represent an accurate cross-section of CVC life. From Francesco singing about his reoccurring nightmares, David singing about failing his maths exams and Elliot singing about his distaste for mainstream radio, as well as them singing in unison about their love of the party lifestyle. We feel as though every song has the potential to be somebody’s favourite song, and we hope the album will be recognised in its entirety.

What’s your songwriting process like? Do you have a set routine or is it pretty much the same each time?

Do you think your hometown has influenced the music you create?

Not really…our hometown is responsible for bringing us all together, and we all have different influences. Combined we have created something that we feel is very unlike anything coming out of South Wales at the moment. But we are proud to come from Church Village and we will always have it at the forefront of our image and brand.

When the world opens up again, will there be a tour to support the album?

That’s the goal! But at this point, we’ll be happy to start gigging in any sense of the word. We’ve already planned how the Get Real Tour would look, from stage design to outfits, to setlists.

We love N-Dubz, especially ‘Papa If You Can Hear Me’.