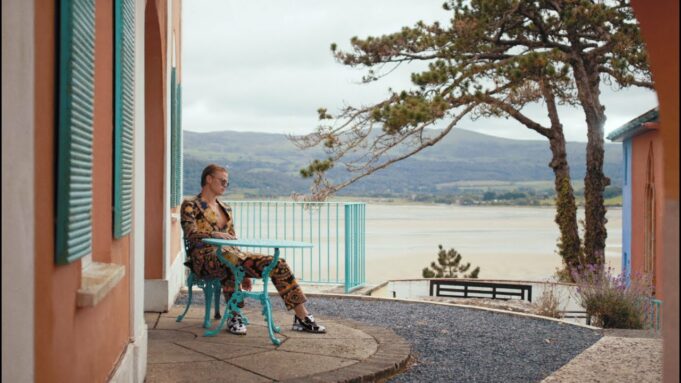 Hailing from the Dolgellau, North West Wales, Sŵnami are back with their first new track in four years. There’s something so soothing and refreshing about listening to music that’s not in English and we’re pretty sure Sŵnami are about to break into the mainstream any second now.

We chatted to Ifan D, Gruff and Ifan Y about their new single, singing in the Welsh language and their dream collaborations.

Tell us about your new single ‘Theatr’ what inspired it?

Ifan D: The song originated during a studio session. We were working on some other tracks. After a lunch break, I started playing about with some chords and started singing a melody that we all instantly got excited about.

Gruff: We wanted to make a hell of a noise, so I started plugging synths into various guitar pedals until we found this crisp, chaotic sound that became the grounds for the song. It was a lot of fun for me at the time.

Ifan Y: Most of our songs start with a melody that Ifan D sings, and he uses random words and phrases to fill the blanks. There is that one demo from the past where he sang “Bonjour, Supermarche” for 2 minutes straight.

Ifan D: It was just after coming back from the Eurosonic festival! The service stations in Europe are quite unique.

Ifan Y: this time around with Theatr, it was “You’re never gonna be my way out”, which inspired me to write a song about being trapped in a relationship and wanting out. It feeds into the broader theme of escapism within the collection of songs that we write – and Theatr is about a need to escape a broken, unhealthy relationship and wanting something more.

It comes as an a-side ‘Uno, Cydio, Tanio’, it’s quite a different vibe from Theatr, did that come about in the same way?

Ifan D: ​The main idea initially came together during a soundcheck; Gruff was playing around with an organ sound on a keyboard.

Gruff: Honestly, I was just messing about with different chords at the time, and I remember Ifan coming up to me saying “play that again” and I was so confused. “Play what again?”

Ifan D: I was listening to a lot of Mac Miller and Leon Bridges at the time and wanted to write a more soulful sounding song. We listened to a lot of ‘lazy’ J Dilla and Nate Smith-esque beats and tried to replicate that feeling in the groove. Most of the band members had given up on the track, but I knew something was there and pursued it with Rich Roberts (our producer) in the studio.

Gruff:  We brought in a few extra players to the track. Ifan scored out parts for a string quartet, which, during lockdown, was all recorded remotely. It also features Nate Williams on the bass, a session musician who tours with Jamiroquai.

Lyrically the song discusses lockdown frustration and fatigue. On the one hand, frustrated with the restrictions on our lives, and on the other, disappointment with the hypocrisy and incompetence of our Westminster government response. It does also offer hope; There is a light at the end of the tunnel, and this idea that hopefully, the experience could positively affect the long term.

What made you want a career in music?

Gruff: Music is our second nature; it’s just what we do!

Was it a conscious decision to sing in the Welsh language?

Ifan Y: “It’s just what happens naturally. We’re all first language speakers. It’s just how we think, it’s how it works, and it’s just how it’s done. We’ve had discussions about it, but when it comes to the crunch, it just always comes out in Welsh.”

Ifan D: The melodies and the sounds of songs usually happen first, either be it myself or Gruff.

Gruff: I’m autistic, and I’ve always had trouble expressing myself with words. Communicating through the noises, sounds, and a song’s arrangement comes first for me. And then we usually have an idea or concept when we match it up lyrically. Ifan Y is the brains behind the lyrics.

Ifan Y: I usually get sent a finished track with a melody and rhythm already locked down. ​The song itself came together pre-lockdown, but the lyrics came together in the first couple of months of the First lockdown.

Ifan D: Working with our producer Rich Roberts is also an integral part of the process; he’s like the band’s 6th member!

Do you ever get scared or nervous when releasing new music? Gruff:

Gruff: Of course! But the excitement counters the nerves.

Who would be your dream collaboration, and why?

Gruff: Personally, Jack Steadman of Bombay Bicycle Club. I’ve been a big fan of them and their progression throughout the years—him or maybe AG Cook.

Ifan: Yes, it would be cool to have Jack Steadman produce a track with us. Or the late Phillipe
Zdar, who had worked closely with French band Phoenix over the years.

What are you most looking forward to post-lockdown?

Have you ever had any rock star moments?

Ifan Y: Erm, does having had a van with the bands’ name on the bonnet count?

Ifan D: We’re going to be releasing more tracks. We’re excited for everyone to hear what we’ve been cooking up. Once we’re allowed to, we’ll be ready to perform live again.