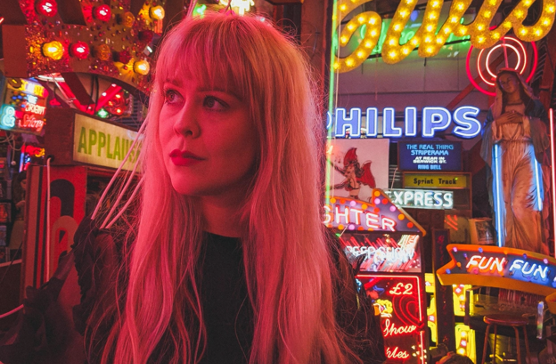 Having the previously sold-out a show at London’s Garage and performed sets at the Reading and Leeds festivals, Litany is a name you should remember.

We chatted to Litany about her new track ‘Starsign’ and what it’s like being a woman in music in 2020.

Tell us about your new track ‘Starsign’?

It’s about being a massive freaking commitment-phobe. You could meet an absolute Adonis but in the end, you realise you need to do you right now, the stars aren’t aligning for ya.

What’s your songwriting process like? How do you get into the ‘zone’? Do you always go into it with an idea or do you tend to go with the flow?

I’ve found that taking an idea into the studio no matter how small always helps. Starsign’s chorus was written in a dream I had – I have a voice note of me singing the melody all groggy at 4:30 am. I took that in when I next saw Earl Saga in his studio and we made it into a real-life song with Hugh Vincent.

Your track is called ‘Starsign’, are you the type of person to continuously check their horoscope? Or do you think it’s a load of nonsense?

A bit of both, if my horoscope is bad, I’m always like oh yeah this is a sack of shit. If it’s promising, I’m ready to buy Capricorn themed home items and everything, ya know, go the whole hog. It is kinda fascinating though isn’t it?

Had your heart always been set on being a singer?

Oh absolutely. I used to get called Adele Cornell at school. If there was an assembly or event, I’d be singing at it without fail. I never grew out of wanting to be a ‘popstar’.

Your headline tour has been rescheduled until 2021. What do you love most about touring?

And then some… when will this nightmare be over?! I love the moment that you first speak to the crowd after you walk on stage. Every night you get so nervous you feel sick and yet every night it goes away as soon as you say that first “hello”.

Is there one artist that you’d love to come and see you perform
live?

Florence Welch. She was the first female artist I saw that made the hairs on the back of my neck stand up. How rad would it be if the same happened to her whilst seeing me? Ugh, what a dream that would be.

What’s the hardest thing about being a woman in an industry that’s normally dominated by men?

Something that bothers me personally which seems a little trivial but it’s a genuine thing: I feel like it really *matters* what women look like and how they present themselves but I don’t think the same applies to men. I once had a meeting where someone went on and on about how I looked and how another girl on his roster used to look before she took his advice and it was so disheartening to hear as a young woman starting out in the industry.

If you could collaborate with another female artist, who would it be?

Can we make a wheel of fortune and write Caroline Polachek, Christine & The Queens, Florence, Robyn, BANKS, HAIM, Empress Of and MUNA then see where it lands?

Is there one track from another artist that you wish you wrote?

There are many tracks I wish I wrote but ‘So Hot You’re Hurting My Feelings’ is just perfection.

Whole of The Moon by The Waterboys for no reason other than it is the best song ever written.