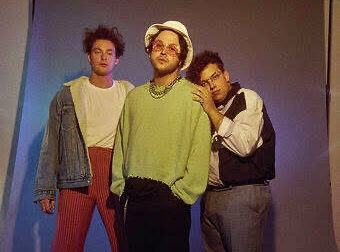 Meet LA-Based indie-pop trio Lovelytheband. It’s impossible to have not heard of Lovelytheband with the trio thriving in the pop, indie and alternative scene.

Consisting of members Mitchy Collins, Jordan Greenwald and Sam Price, the trio are back with their highly anticipated sophomore album ‘conversations with myself about you’.

lovelytheband has been on the rise for quite a while now, with their breakout single ‘broken‘ appropriately broke Billboard’s Alternative Longevity Record with 75 weeks on the chart— 9 of those consecutive at #1.

I chatted to Jordan Greenwald about the band’s new music, songwriting and UK fans.

How did you form ‘lovelytheband’? When did you guys get together?

Jordan Greenwald: I met Mitchy through some mutual friends, and we hit it off immediately. he mentioned he had some songs written for a band he wanted to start.  We met Sam a bit later on, but once all of the pieces of the puzzle were together we were really up and running.

We’ve been loving your new album ‘conversations with myself about you’. We’re obsessed with ‘idwgtyp’ and ‘love somebody else’. What has the fan reaction been like so far?

Jordan Greenwald: thank you! It has been overwhelmingly positive, so that’s been so nice to see. It’s always so scary putting really anything out, not to mention a 14 song record. So we are excited, to say the least.

Jordan Greenwald: Every song really is different. For us, it is truly how we deal with what’s going on emotionally. It’s almost the light at the end of the tunnel, or just something to help us get there. All we hope is that it helps others get to wherever they need to be as well!

What’s your favourite track from your new album and why?

Has the LA music scene impacted your sound as a band?

Jordan Greenwald: When I think of LA I think of just one big mix of eclectic cultures, so I’m sure it’s influenced indirectly. I feel like our sound comes from the combination of our individual tastes and influences growing up, which is very eclectic in itself.

Jordan Greenwald: We had another name, but we had some copyright stuff with it. Mitchy thought the word lovely was cool, and @lovelytheband wasn’t taken on Instagram and we thought it looked cool. Haha not that great of a story but that’s literally what happened.

You have previously performed at The Garage in London. How do UK fans compare to those in the US?

Jordan Greenwald: That was such a great show, UK fans are literally next level. They are so loyal and passionate, we cannot wait to get back there ASAP.

What’s the ultimate goal for lovelytheband?

Jordan Greenwald: I think the ultimate goal is just to keep doing what we’re doing, making music and growing the family as big as we can grow it.

Lastly, if there was a movie based on your life, who would you like to play you?

Jordan Greenwald: Personally, I feel Matthew McConaughey would be the guy for me