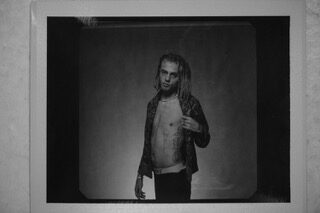 Back with his striking trap rock track ‘Outlined’, Macca Wiles has already garnered over 60,000 streams on Spotify since the release.

Born in Essex, Macca’s teenage years were relatively uncomfortable.  He wasn’t a fan of the indie bands his peers loved – and they weren’t a fan of the rap music he was making. After being permanently expelled from school, he decided to take charge of his career.

The 22-year-old has lived several lifetimes (and across two continents) to arrive where he is today. Having previously collaborated with Lil Yachty on Soundcloud, Macca nails the trap sound of the era.

I chatted to Macca Wiles about his new track ‘Outlined’, addiction and Lil Yachty.

How did you first get started in music? Can you remember the moment you knew this was something you wanted to pursue?

I first got started in music when a friend had a home studio and I and the circle around me would always write little raps & songs over YouTube beats, so I put them down a few times real young at the home studio. I started taking it seriously when I was 16 releasing music on SoundCloud & the songs were accumulating 20K+ streams.

Tell us about your new track ‘Outlined’. Did you find it difficult to write about your experience being addicted to codeine promethazine? Or was it refreshing to be extremely honest and vulnerable with your fans?

I didn’t find it difficult, no,  if anything it’s more difficult hearing it now than it was doing it then because I’m past all that now… but when I recorded it I was still in that bad space so it just takes me back when I listen to it. That being said it was refreshing speaking on it, as I’m a closed person so music is my way of letting out the things I can’t bring myself to talk about otherwise.

How would you like your songwriting to develop? Do you have a direction in mind?

My songwriting has already devolved massively from where I started, my direction is just to be as raw & real as possible, I talk about all the things people are maybe too scared or anxious to be vocal about. I wanna help people not feel alone.

How do you separate yourself from other artists?

Can’t say this without sounding cocky, but no one is making music like me, period.

Who are some of your biggest musical influences?

You’ve previously collaborated with Lil Yachty, How did that come about and what was it like collaborating with somebody as well-known as Lil Yachty?

Yachty hit me on Instagram ages ago, I remember he had like 300 followers and would get 20 likes a picture, to see how far he’s come from then is dope. I met him in Atlanta at a party that was going on in east Atlanta. Gunshots went off & everyone kinda dispersed slowly so didn’t get to chop it up properly, so the verses were recorded in separate places.

Do you have any pre-show rituals?
To have my closest brothers with me, that’s all.

Linkin Park & Young Thug. Linkin park because they are the reason I got so into music, before them, I had a hard time finding music that made me feel emotion, they did that for me & to this day I absolutely rinse all Linkin Park’s music. Young Thug because when I started making rap he was my inspiration, I don’t even know how you describe young thug, his music is just magic.

What is your dream festival and/or venue to perform at?

ROCK AM RING Germany for the festival, venue o2 arena London, feel like that’s just a goal for any U.K. artist.

If only I knew, I’m just doing what I gotta do & putting the hard work & dedication in as always will see where the road takes me.