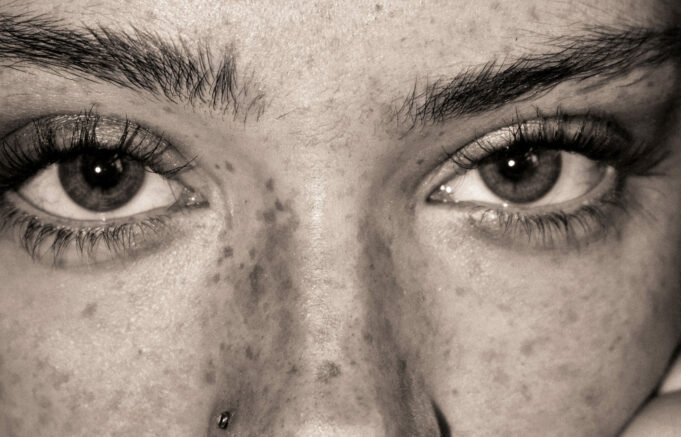 Tipped globally as one of 2020’s biggest breakthrough artists, and with two sold-out shows at London’s OMEARA, 20-year-old Holly has proven herself a transcendent talent since her debut with an acclaimed trio of singles ‘Deep End’, ‘Falling Asleep At The Wheel’ and ‘Overkill’, which have amassed well over 20 million streams to date.

I chatted to Holly about her debut EP, how she deals with things emotionally with songwriting and dream artist to support on tour.

How did you first get started in music? Was there one moment where you knew music was something you wanted to pursue?

I don’t remember there being a specific moment when I decided to pursue music as a career. I grew up with a really creative and encouraging family so I was writing and playing as a hobby when I was quite young. I’m always finding old notepads around my house with hilarious lyrics on I’d written when I was probably about 10. I kept at it and in high school, I began recording basic demos on my dad’s laptop and sending them to my friends and uploading them to the internet, and managed to get some recognition from that and build a team around me. It’s so cool I’ve been able to make a career out of my hobby and I hope I get to keep doing it!

Tell us about your debut EP ‘Falling Asleep At The Wheel’. What inspired it?

The EP has been written over the last few years about the experiences and relationships I’ve had and things. A lot of the time I find it really therapeutic to write things down as putting things into a song feels like sorting through my feelings and thoughts and simplifying them and condensing them down. A lot of the time writing I’m just trying to figure out how I’m feeling about stuff!

What’s your songwriting process like? Do you do anything to get into the ‘Zone’

The writing process really varies for each song. They seem to come about in lots of different ways. I make notes on my phone of cool phrases or concepts as I’m going about life and sometimes I bring those into a session and base a song around those. Sometimes when I’m really inspired or feeling strongly about something it’s so easy and the song writes itself, but equally, sometimes it can take weeks for me to finish a song!

Yes, it’s the best way for me to cope with the stuff I’m going through! I’m usually a really busy person with a crammed schedule so I’m rushing about everywhere and my head can get quite messy. It’s really important for me to have the time to sit down and work through it all and simplify it in a song.

What track do you hope will be a fan favourite and why?

I really hope people will love vanilla! It’s definitely one of my favourites just because it was so much fun to write, I think you can hear that within the track. I love writing sad songs but vanilla is so fun and lighthearted and I feel like it’s a good one to be happy and dance to.

What’s your favourite track on your EP?

I think my favourite track has to be falling asleep at the wheel. It took me so much writing to figure out my musical identity and who I wanted to be. I remember writing it and thinking it was the first time I really knew who I was within the music I was making and the direction I wanted to head in sonically.

Who would be your dream artist and/or band to support on tour?

Maybe someone like Bon Iver or Sufjan Stevens. I’d pick someone I could listen to every night and not get bored of it; someone who is experimental with weird electronic sounds.

I really like to go for a walk like 20 minutes before I’m on to calm myself down. It’s nice to be on your own before something so intense, and it gives me a chance to mentally prepare myself and think things through.

Touchwood nothing has ever gone horribly wrong during a set, but I’m sure my time will come. I’ve had a guitar snap clean in half backstage after a gig right in the middle of a big tour before though which wasn’t ideal.

I think just hearing music a lot whilst growing up. My parents have a really wide music taste and would listen to stuff all the way from Damien Rice and Regina Spector to Led Zeppelin and Pink Floyd and we’d literally always be listening to something.

Probably New Slang by The Shins. It’s a beauty.

I think just try to make truthful music and work hard at it! Be persistent and stick with it because that’s the only way you’ll improve. For me, songs tend to be the best and come the easiest when I’m not trying to filter what I’m saying and just writing exactly how I feel. I think honesty is the key to good music in my opinion.