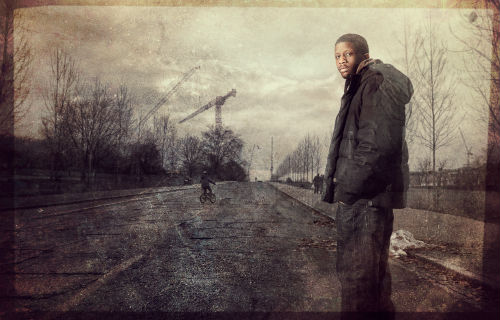 Melanin 9 dropped his first mixtape ‘High Fidelity’ in 2007 and has since become one of the most respected lyricists around in the UK hip hop scene. Ahead of the release of his debut album ‘Magna Carta,’ Flavour caught up with the rising star to talk music, beliefs, inspirations and more.

In terms of UK hip hop, what do you think about the scene here and the support?

In terms of growth, its come further than it ever has throughout the history of the urban music so to speak. A lot of artists are crossing over overseas and getting collaborations with US artists so it’s definitely grown. A lot of people from all over the world have started to recognise what were doing here. I still believe there isn’t much exposure for a certain type of style here in the hip hop scene. More artists need to be exposed who are doing different things, not all artists do grime, not all artists do dubstep, there’s artists who just speak pure organic hip hop, and I feel the scene needs to support that just a little bit more.

Your music has contained influences and elements from a variety of different individuals and belief systems, including Islamic Supreme Mathematics, David Icke, Malachi Z.York and many others. With such a diverse set of influences, how do you form a cohesive philosophy, and how does this translate into an easily understandable and relevant message in your music?

My music stems from what I do, my life and certain things that I’ve been taught. It comes from all kinds of things taught, from all kind of philosophers from different backgrounds and religions. I’m coming from anything that’s worth exposing to the world. If it makes sense to me I’ll put it in my music. In terms of deciphering, if I make it a bit more accessible lyrically, make it a bit more basic, maybe people will like it a bit more. I know it’s hard to hear what I’m saying at times when the flows a bit rapid and my vocabulary ranges a bit out of the norm. The only way to make it more understandable is to break it down, use more wordplay and more familiar flow.

You are known by both Melanin 9 and the shorter M9. You have previously stated that Melanin 9 represents your identity as a black man, and that the 9 represents you and your people and the journey and struggles of black people as a whole. This is a highly thought provoking choice of name, and yet M9 also stands for a popular handgun. How do you deal with this disconnect and do you ever worry that it sometimes misrepresents you as an individual and an artist?

At first I thought a lot of people would associate me with a handgun and I tried a lot in every single interview to make sure people understood what the M and the 9 meant. At first I was using M9 a lot and I was getting that perception, so I started using Melanin 9 properly, which is why the album is coming out under the proper name. I was getting a little bit of ignorance, but not really now as I’ve built up in my career, people seem to know what it means now. I think people address me as Melanin 9 aka M9 that’s my stage name.

You have done a lot with Triple Darkness. As a group of socially aware and outspoken lyricists, to what extent do you all agree on the messages you want to put out, and how did you find such like-minded artists?

I did a few things with them back in the day; I’m trying to do my own stuff at this point. Like-minded people came from certain places I used to go, hang out. I’d just meet certain guys round my way, people my age, we all rapped the way we rapped and liked a certain type of music, that’s how we found those who were like us. That’s how we built and got collaborations, it all stems from the music, we all like the same kind of things, that why we all rap alike and share the same thoughts.

It seems fortunate that you have been able to work with producers such as Chemo and Beat Butcha in the past, and their beats have added a lot to your music. How important is it to find producers who you work well with, and what do you look for when looking for beats to write over?

Just if it sounds nice. I like nice kicks and snares just like anyone else who makes hip hop would. Nice soul samples, jazz, something smooth is always good to roll with and is the approach I like to go for. I do a lot of searching online, there’s a lot of great producers out there. I’ve found a lot of good producers on Soundcloud, a lot contact me as well on social network and I’m always checking them. What happens in the future if your current ideologies and beliefs change? What does that mean for the validity of the music you are making now?

My ideologies and beliefs are always growing it always evolves. I don’t limit my perceptions to one thing, I’m always learning, everyday I’m learning something new so that will never happen. I’m always adapting and looking at things differently, always researching. My beliefs are always growing, I don’t believe in one thing, I take whatever makes sense to me and I learn from it. I don’t stick to one religion, I believe in spirituality.

Your soon to be released album is titled ‘Magna Carta’. If you were to create a ‘great charter’ that would apply to the UK hip hop world, and its fans, industry and record labels, what key points would be in it?

Whatever I stand for freedom, spirituality, learning to grow, to read, to explore, to be creative, always try and work on your craft, believe in yourself, be you, be real. Be all the things that would be in the charter, that’s what I stand for.

Can you talk us through the inspiration and the reason behind the name?

I’ve done about 4 mixtapes and a lot of people thought the last releases were albums. A lot of magazines marketed it like it was an album. This is my first album, its all original beats from producers that I like. I wanted to make it the best out of all the other releases so I put a lot of effort into it and it took roughly about a year and a half to make. Hip hop inspired me, the purest form of it, all the people I looked up to when I was young, all new comers like Jay Electronica. I’m always a student of hip hop, so I’m always studying artists and what there doing, and what’s going on in the scene. ILife inspired me, knowledge inspired me, growth inspired me, my people around me inspired me, my daughter inspired me, just life.

What are your plans musically for after the New Year?

I want to drop a new mixtape. I’m working with quite a big guy from LA an artist. Next year you’ll see an album with me and him and a mixtape from me.