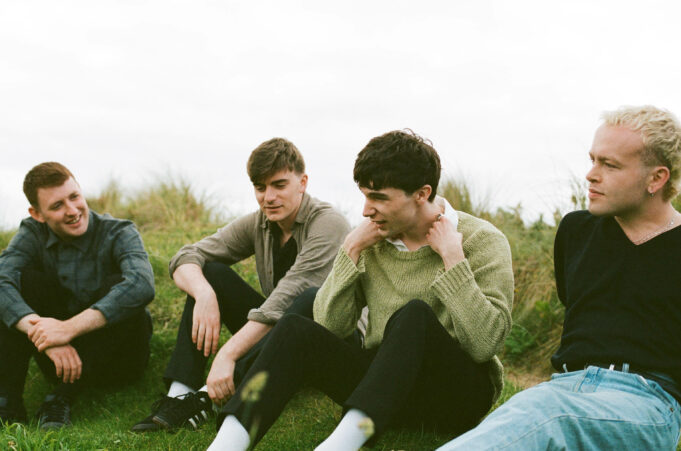 Formed by members Mark McKenna, Conor Gorman, Conor King and Morgan Wilson on New Year’s Day in 2019, Dublin-based alternative-pop band milk. have been on the rise ever since. With over 100,000 Spotify streams, the band has managed to connect quickly with their fans, making music for the rapidly evolving world.

Having already sold out their first-ever London show, milk. are definitely a band to watch.  We expect to see much more of them very soon.

We chatted to Conor K and Morgan about new music, bad habits and their 2021 UK and EU tour.

How did you guys first meet? Who came up with the band name?

Conor K -We all attended the same college and were familiar with one another from playing in different bands around Dublin, I think Mark came up with the name – he took inspiration from A Clockwork Orange and how milk is used in the film/book.

Tell us about your new single ‘2’. How did the collaboration with Search Party Animal come about? –

Morgan – Search Party Animal are great friends of ours – we met Adam in college a few years ago and he has produced all of our music to date. The collaboration came totally naturally, as we’re all so comfortable working in the studio with Adam already. He really led from the front with the sonics and production this time, and we love how it turned out.

Conor K – Our songwriting is collaborative and generally happens over WhatsApp, for the most part. Someone will send in a demo and we’ll discuss it and make changes, again and again, until we’re all happy with where it ends up. We’re used to writing in this way while Mark is away, so quarantine hasn’t been that creatively compromising for us.

Morgan – I would describe our sound as alt-pop. I think that no matter how accessible and catchy the melodies may be, we always make a particular effort to incorporate interesting production and textures and push the boat out as much as we can.

Conor K – I’d say something along the same lines as Morgan, I think at heart we’re a pop band but we aren’t afraid to experiment with different sound palettes when it comes time to produce a song. I’d like to think that the music is accessible but also interesting enough to the listener to want to come back.

Morgan – I bite my nails

Conor K – I’m probably the worst for spamming the group chat and then double texting if I don’t get an answer.

You’re finally heading on tour later this year, what can fans expect? –

Morgan – I’ll just be very, very happy to be out in the world again. I can’t wait. Fans can expect us to give it our all and give them the best shows we can. By then, we’ll have a totally new live show. I’m really excited to see how audiences respond to it. It’ll be a lot of fun.

Conor K – I’m really looking forward to sharing these songs with people, face-to-face. As rewarding as it is seeing people streaming our music and showing us love online, there’s something really special about being in a room with people who love your music – with that said being we’ll be going all out for these shows, for many people it might be the first show they’ll have the chance to attend post-lockdown so we want to make every show a night to remember.

Your EP is also due later this summer, Is there one track you hope will be a fan favourite?

Conor K – I think our next single (soon to be announced!) will be a fan favourite, it’s an old song Mark had that we reimagined last summer, it’s my favourite thing we’ve done so far. There are a couple of others that I think will translate really well live, I’m just really excited to get the project out there.

Conor K – Probably how little we’ve all been in the same room together at the same time. We’re in constant contact and I consider the lads to be my best friends but when we first started the band everybody’s schedule was crazy and now we’ve been in lockdown for over a year. Part of this is a big reason why I love being in the studio with the lads and why I’m looking forward to the shows coming up later this year! Who doesn’t like hanging out with their mates?

Morgan – That’s a tough one. I’d hope I live well enough to have it be one of The Blaze’s tunes.

Conor K – That’s a very tough one, I’ve been going on a lot of walks recently and it’s hard to be in a bad mood strolling along to ‘Never Too Much ‘ by Luther Vandross, so I’ll go for that.

Morgan – We have more new music on the way, and as you’d mentioned we’ll be going on tour between October and December of this year. Tickets for those shows are available on our website if you fancy coming to see us.