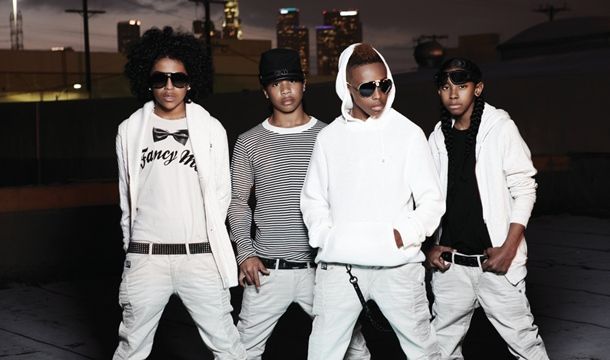 Mindless Behavior is a unique four-piece of 13 to 14-year-old boys – Prodigy, Roc Royal, Ray Ray and Princeton – embracing the liveliness of four Justin Bieber clones! And this is just the fairy-tale beginning for the new RnB sensations, following a Top 10 album #1 Girl, and a fan base of thousands, which includes Janet Jackson, Beyonce and Lady Gaga. They are now generating a buzz as one of the most explosive and charismatic teen bands to emerge from the States. On a recent visit to the UK, Flavour sat down with the MB boys for a closer look…

To celebrate your current success we’ve brought you a gift – our answer to a Grammy. It’s a 2 x 500 piece jigsaw puzzle, which will hopefully keep you all busy while here in the UK.

Princeton: When we were on tour with the Backstreet Boys, I actually brought a 500-piece puzzle of the Mad Hatter because I am a big Tim Burton fan. We completed it in two hours, so hopefully we can complete this as well.

You’re barely into your teens and already you’ve got the RnB boy-band game on lock. How much has your life changed since becoming Mindless Behavior?

Ray Ray: Right now our life is on the road. We are home schooled as we don’t go to public school anymore, we’re just living out of a suitcase.

Prodigy: This is what we always loved to do, so we definitely enjoy it.

Is there anything you can no longer do?

Princeton: In some states we are really big, and in the ones we aren’t we definitely take advantage of going to the mall and doing fun activities. Whenever we do get noticed it’s not a negative energy, it’s always positive because we see it as a time to connect with the fans, besides them watching us on TV.

What do you think of the more old-school bands like The Jackson 5 and New Edition?

Ray Ray: We really appreciate those groups. They are iconic and we really look up to them.

Prodigy: We will be bringing out something different because of our ‘Mindless’ movement. So, are you guys well-behaved?

Princeton: Yeah, we are. During our three-year development that’s what we trained to be.

You’re usually bitten and mobbed by screaming girls everywhere you go. Are all your fans vampires?

Princeton: Some of them are, some are also werewolves and then some are Cougars.

Prodigy: These fans are the fastest people. I would not be surprised if they can beat Usain Bolt in a race.

What’s a typical day for you?

What’s the strangest gift you’ve received from a fan?

Roc Royal: Someone actually gave me a dog…

Are we talking an actual animal?

Roc Royal: [Laughs] Yeah, but I could not accept it as I have already got too many dogs at home.

Are you the bad boy of the group?

Princeton: Yes, he is. He’s young and restless; he’s silent but deadly, like a fart. [Laughter all round]

What would it be like to be part of Mindless Behavior for a day?

Princeton: Expect to get bitten, so you will definitely need football padding; you have long hair so that will be pulled a lot.

In your next life who/what would you come back as?

Princeton: I would like to come back as an ant. You obviously receive a lot of female attention – what sort of girls do you fancy?

Princeton: I like a lot of girls. It does not really matter about skin colour or weight… It’s all about the brain.

Prodigy: My girl just has to be herself and love me for me.

Ray Ray: She needs to love to have fun and love to hang out all the time.

Roc Royal: I also like any kind of girl, but my girl has to be special and love me for who I am.

You’ve hung out with Lady Gaga, Janet Jackson and Ciara. Is it strange having them as fans?

Ray Ray: Janet is an icon. So when we met her, we were a little nervous; and Ciara was just really cool. It’s nice to know that we’ve met and worked with them.

If you could have one superpower, what would it be?

Ray Ray: I would like to be like Mystique from X-Men, where you can just change to different people.

Prodigy: I’d love that Superman power where if someone shoots you, then the bullet bounces right off you.

Princeton: I’ll have to agree with Ray Ray on Mystique – I would love to transform into other people.

Roc Royal: I would love to have that superpower like the stretchable guy from Fantastic Four.

Who do you respect the most?

Roc Royal: It has to be Michael Jackson.

Princeton: I definitely respect [Barack] Obama for what he has done for our country.

Prodigy: I agree with Princeton.

Ray Ray: I’m also going to have to go with Obama.

Prodigy: I think we should see how it goes…