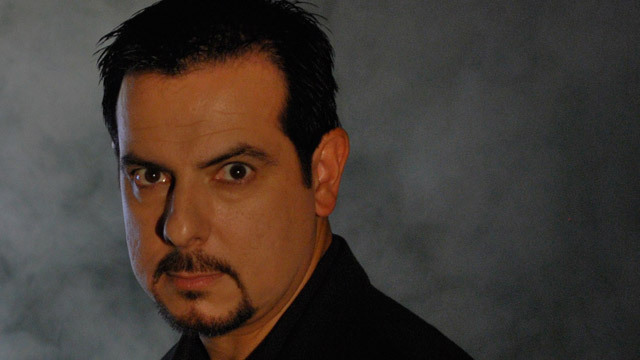 We got the chance to have a very interesting chat to L.A.’s leading Paranormal Expert, Christopher Chacon, who has been involved with all the Paranormal Activity films, We talked about the final film and lots of ghostly paranormal phenomena.

You’re a leading Paranormal Expert in L.A. and you’ve worked on all Paranormal Activity films. How did you initially get involved?

Eh wow! The first one…It was quite some time ago now, I can’t remember it! The Director and producers had approached me and talked to me about the film and then it was Paramount’s initial who brought me on board to pick my brain regarding real phenomenon and that’s when they come to ask if I didn’t mind being part of the film. They felt the film was going to leave quite a mark and it was going to open a dialogue with people and the subject matter. They felt if I could be part of that campaign it would be great to be able to discuss phenomena in general. Talk about the film that they want and what phenomena had happened around the world. From that point I think it was Paramount and the producer/directors who had me on board to basically discuss the phenomena.

Did you ever think the franchise would go on for so long?

Not really, I didn’t think about it one way or another. I thought it was an interesting presentation. The film was definitely unique and different. The footage and pictures I get, I get a lot of pictures from around the world from a lot of people and there were a lot of similarities with the way the look is. It basically looks like a home movie, these things are happening in someone’s home and your eavesdropping on them. So it’s very similar to what real footage may look like. That’s one reason why I think it hit such a nerve with people. I think also the phenomena, they release around this time of year because its one of the spookiest times of the year.

Do you ever think that making films of this nature opens up a portal to bring entities from the paranormal world through?

There has never been anything to suggest a film can do that by itself unless your practicing a variety of black magic or any of the occult type mystical rights and its incorporated in the film. The film itself doesn’t have that type of phenomena and I don’t think there has been one that has. That being said we don’t want people not to see the film. They might be more aware of their environment, they might think more when they are alone in the house when a light goes off or they hear something in the hallway, they might think twice about it whereas typically we would just dismiss it as no big deal. The Film does give the viewer more awareness of the fact of what’s possible.

Was you on set at all during filming or did you hear of anything spooky that happened on set?

No, No. They run a pretty tight ship when they do it. I wasn’t on set for any of the films. From my understanding, I haven’t heard anything which was legitimate as far as phenomena happening on the set when they did them. if things like that did happen there are other para-psychological explanations for something like that happening. Not necessarily supernatural. There is a distinction between the two. Again I haven’t heard anything happening.

I don’t know if you know but why did the makers decide to move away from poltergeists and go for the ghost story on the final film?

Its down to interpretation, because this last film gets more into what’s behind the scenes of the phenomena. In the other films, there was a lot less left to the imagination of what is causing the phenomenon. This one they are trying to paint the picture explaining that and go full circle with it. That’s why it probably feels different. I think in the other films they are trying to cram together the best of paranormal or poltergeist activity and they wanted to do something that was different other than do the same thing over and over again. This one is different in that way because they do two things at the same time. They pick something that is different from the other films and at the same time they are showing you a different perspective of this phenomena, what could be behind the whole things that have been manifesting.

What’s the difference between poltergeists and ghosts?

There’s a very interesting distinction because there is old culture and the terminology is different to any other culture and historically speaking. I’ll try to give you the quick rundown. A ghost, of course, is a significantly older term. It has always been regarded as a disembodied spirit. A disembodied spirit takes references from religious text, folklore. A disembodied spirit is someone without the body and can’t interact with you. A lot of people interpret that they are left behind because something bad happened or they are trying to get some place or don’t even know they are there. Now a Poltergeist, which is, originally a German term meaning noisy ghost. It’s been updated and these terms have changed Modern day parapsychology has basically refined this term based on the research. They say that poltergeist activity is kinetic activity; a ghost doesn’t necessarily knock things over or move doors. A poltergeist is an active force that makes objects move; things to that effect.The often say a ghost, in older terms, is residual. So think of it like a video tape. You play it on the TV, you hear voices, you see people. You can’t talk to them, you can’t interact with them. Thats residual left behind on a video tape. This is the same thing that happens with ghosts that sometimes the ghost sometimes the tape just plays in the environment. You think there is somebody there, you might hear voices or see something but in fact it’s just residual energy left behind.

Now all that being said, after thousands of cases I have been on all over the world regarding phenomena none of those are true. I have encountered cases where people have said there are ghosts and the disembodied spirits are not there because they have a person or trying to get to the light or because something horrible happened. Sometimes they are just there and I think a lot of the early terminology has been altered because of Christian beliefs. That’s not the case at all. The same with poltergeist activity. I have been to locations where no one has ever died in that location, it’s not built over a graveyard where it’s a perfectly new home, newly constructed over an area that has no history and yet the activity is through the roof. I have been in other locations where the most horrific things have happened in the smallest space and yet no haunting or poltergeist activity was there. So those rules don’t apply. Some people actually build their homes on top of dead loved ones graves to be closer to their spirits.

Do you ever encounter people who say they experience paranormal activity but are just faking for attention?

Great question! I spent a dozen years with a scientific group looking at anomalies. We had a procedure of ruling out hoaxsters. It’s basically a circumstantial assessment. Once we have ruled out that we also have to look at the psychology of people. A psychological assessment so we can find people who are psychotic. We also look at whether someone is physiologically impaired. We had someone one time a woman was seeing some things in her house moving around and it turned out she had a brain tumour pushing against a certain part of her brain which made her eyes think she was seeing things. We also look at environmental factors. We would rule out all these factors before we would conduct a full investigation. Now, the clients I take on, I don’t charge at all for my services, they just have to fly me there for my assessment. But before I get on that plane to any part of the world they have to meet those criteria. They have to have a medical doctor or someone credible skills to rule out those factors before I even get there. They can also have no camera equipment, no video. There can be no press involved because that rules out hoaxsters right there.

Have you ever had a call from a celebrity who has experienced ghostly goings on?

Oh yes, absolutely. Celebrities in Entertainment, figures in Government and media across the board. It’s very difficult in those situations because I’m usually contacted by a medical doctor etc who contacts on behalf of them. Then when I actually get to them I have to speak to their assistants or somebody who prepares me. They want to know that I am going to keep it strictly confidential. Everyone is making sure everyone is on the same page; if this is happening we are keeping it just between us, this will never go out to media or press. I have dealt with people across the board.

How did you first get into the paranormal?

It was pretty much by accident. I had no intention of doing this. When I was in college I was a magician and illusionist. I was approached by some people who said they a ghost and wanted to know how they could stop it. So I went in and tried to help them and try to figure out the situation. What was interesting was I found it fascinating what people’s experience and interpretations were about the phenomena. One thing led to another and they referred me to someone else and I got 3-4 other cases of poltergeists activity. There were a couple of UFO-Close encounter and experiences and psychic phenomenon. Before I knew it I was getting dozens of cases. I ended up pairing up with a parapsychologist and that’s when all the training came in. We did hundreds of cases there and it kind of snowballed. Every time I thought we would come to the end of it something else would happen then I was employed by a scientific firm spent many years travelling the world with all this equipment and technology. It really was a twist of fate that I fell into this and doing it for so long.

Paranormal Activity: The Ghost Dimension is released on 21st October.