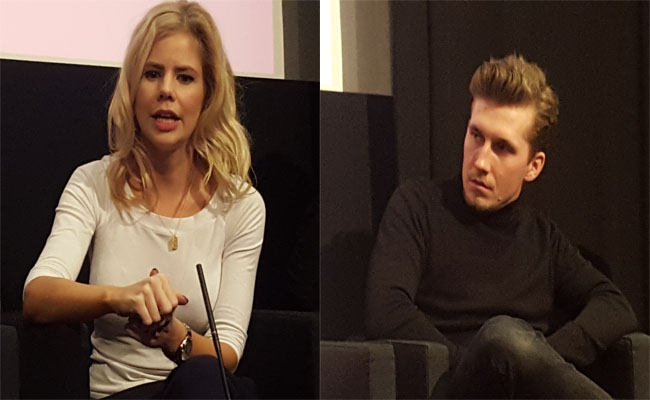 All4’s Walter Present’s is a Brand new collection showcasing the best foreign-language drama series from around the world, handpicked especially for you and most importantly all free to watch.

One of the drama’s picked by Walter himself is the Danish supernatural thriller Heartless, set in a boarding school it will be right up the street of fans of Twilight, True Blood and Fifty Shades of Grey. Already a huge hit with online audiences, Heartless is the second most popular Walter Presents show online behind Deutschland 83. We can vouch that this show will suck out your very soul as it grips you in and won’t spit you out until the very last episode. WARNING: It’s highly addictive and we love it.

HEARTLESS stars Julie Zangenberg (who is the girlfriend of footballer Nicklas Bendtner) and the male star Sebastian Jessen featured in Borgen and alongside Piers Brosnan in Love Is All You Need. Last week Julie and Sebastian were in London for an Exclusive Q&A session for fans of the show and we had the honour of sitting down with Julie and Sebastian for a chat about the show beforehand.

Tell us about your characters and the role they play in Heartless.

Julie: I play Sofie, who is the sister of this sister and brother relationship we start off the series seeing. Sofie has the same curse as her brother that in order to survive she needs to suck the life out of other people. When we meet her, she’s more accepting of it, that this is who they are they didn’t choose this, in the same way animals don’t feel shame or feel bad that they need to kill in order to survive. She’s more constructive, more aggressive than Sebastian. She is more the male character to start with, then we see her journey. To start with she takes what she wants but then she falls in love and wants to change for the better and wants to find out what’s wrong with them so she can fix it.

Sebastian: Sebastian is a complex guy, He has this thing he is doing and he isn’t proud of it. Doesn’t like it, He’s afraid of it actually. His goal is to get rid of it. He just does not know how and why he does what he does. He’s scared because he is killing people and he doesn’t want to do that contrary to his sister who likes it. He’s just a broken soul.

When you got the script what did you think?

Julie: For me as an actress, the part was interesting. It had different levels, she wasn’t a typical girl character with a lot of hairspray in the hair and beautiful make-up, that she was rough and real. She was a tough girl, I like that in her, but also we got to see a different side. I think what we relate to not just in movies but also in other people is that we see different sides, People are complex. We can feel one thing one day and another thing the next. We all have a bit of good and a bit of bad in us. We all have the light but also have a dark side. I thought that you don’t just see that in Sofie’s character but in all the characters. That is very rare to have such a complex story. I liked that it was brave, the way in which it spoke about homosexuality; we have a very strong leading character who is gay but doesn’t feel the need to feel sorry or awkward about it. The most beautiful thing about not just movies or TV series but art, you can see yourself in and feel less alone. If you can achieve that you can feel all sad and lonely as fuck, then you hear a song and you feel like someone is putting words to your exact feelings, and that helps you. In the same way, I hope people will see this and see Sofie as like a very strong example of someone who is realising who they are and not feeling ashamed about it.

Sebastian: I was afraid, I was thinking I can’t do that (laughs), for one I didn’t know who would watch it, I was scared. I was up for the challenge because it was something new, something not done in Denmark before at least. I was intrigued by that. The story as well, of course, It was something I had to think about.

Julie, as an Actress do you feel you have some kind of responsibility towards your audience to make them feel like this is accepted?

That’s a very interesting question, I do and I don’t. I’ve been acting since I was 12 and during my career, I have been given the question about being a role model and don’t you feel responsible. If you go out drinking or if you have pictures taken of you doing something bad do you feel you’re showing a bad example to your young fans? I’ve always felt like I’m just trying to be the best version of myself. Sometimes I fail; I don’t feel bad about that, I think that’s an even better example to set to people. The other picture you have is unreal, this American picture about this girl being a virgin until she meets somebody she marries, and it’s not real. People fuck up, People get drunk; get into fights, its life. It’s more important for me to be real. Sofie is quite ruthlessly bullied at the hands of boys at the beginning of the series, how harrowing was it to film these scenes?

The pool scene was very difficult to shoot, It was very uncomfortable, I try to do my stunts myself, so there wasn’t a double to do it for me. It was hard to do, doing it again and again and you’ve got water in your lungs and stuff like that. I also felt that it was an important scene to do because young people, not just in boarding schools, experience harsh things and children can be really, really mean. Especially Children who didn’t get enough love from home and try to take that out on others. I also experienced some things in my upbringing and again it was to showcase to people who are being bullied that they aren’t alone. It’s not you who deserve it, its other who are crazy.

Sebastian, you’re involved in one sexy intimate scene are these quite awkward to film?

It was a focus not to be too sexy, it was important everyone could watch it. No, it wasn’t really, I’ve been an actor for many years now even though I’m not that old so I’ve tried that a few times already. I’m over the awkwardness of doing sex scenes. It was difficult for my character because he wanted to but he couldn’t because he knew what was coming. It was something he was struggling with a lot. That is the reason why he’s not doing it. If he did everyone would die. It was a fun thing to act.

The series looks set to make you the next heartthrob, what do you think about how you could be the desire of young girl’s heart?

That is flattering of course (laughs), to be honest, I’m not thinking that much about it. When I was young it was extreme. When I was 15 (he is now 29) it was extreme but it has settled. It’s not that big of a deal anymore. I’ve learnt to cope with it. Is there going to be a second series?

Sebastian: I hope so. It’s possible to make a season 2 but I don’t know. I think Ronnie, the producer he doesn’t know either. We hope that maybe the UK could do something about that. We have said it to Walter maybe he can do something.

The series has only been available to stream for a few weeks but has already gained a very impressive no. 2 spot in All4, making it a runaway success, did you imagine it would be such a huge success?

Sebastian: I was hoping you just never know, it’s not that big of a success in Denmark because we are such a small country and everyone knows each other, the supernatural thing can be difficult. I was hoping it would do well internationally. Thank God it did.

Julie: No, not at all and I am so happy that it is. I’ve lived in London and Newcastle and I love the drama scene you have out here. All of us have put a lot of work into it. It was like a make or break thing, once we saw it our self and could see it turned out nice, we expected it to go well in Denmark but none of us expected it to go well in the rest of the world. Right now I have people writing to me from Poland, Canada, Australia and the UK telling me that they really like it, that’s amazing. It’s the number one wish for something you do that it reaches out so broadly.

Where would you like your career to take you next?

Julie: I’m very fortunate that I’ve always been working a lot, besides my acting, I also have my own production company that primarily does communications videos for IT companies, I have my own food show and right now in Denmark, I am doing Hairspray the musical, I’m playing the super bitch, Amber. It’s very glittery, very different from Sofie. I have a lot of ambition and goals but right now I’m just working so much I’m just trying to do my best at everything that I’m doing. If this leads to some roles in the UK I would love it. I love England and have loved living here.

Sebastian: I prefer living in Denmark; I have some things lined up in Denmark, things I am not allowed to talk about.

Finally, if you could take only five items with onto a desert island what would they be?

Sebastian: My sunglasses for sure, a very good book, a thriller. I wouldn’t call my son an item but if he was I would bring him other than that I can’t think, it’s difficult.

Julie: Does my family count as one? I would definitely need my family and my boyfriend. A Kitchen stuffed with food, See I’m already bending the rules for this (laughs), Many years supply of sun lotion and a toothbrush oh and there is also wine in the kitchen (laughs).