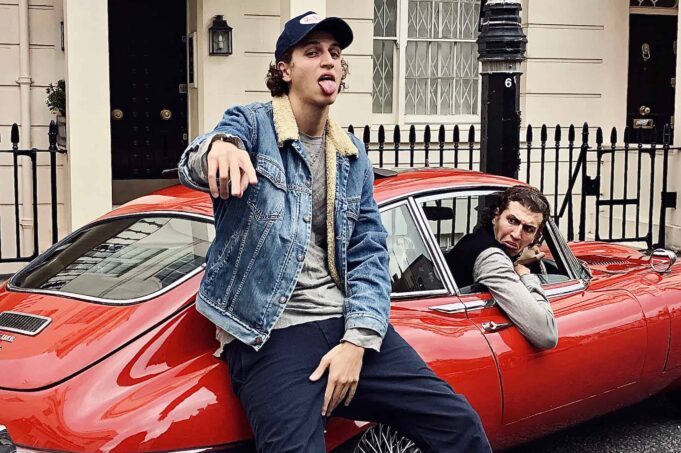 Who is Gstaad Guy and Why should you be following him?

Whether you relate entirely with Gstaad Guy’s personas ‘Constance’ or ‘Colton’ or not, You’ll still have a little laugh when watching his videos.

I first met The Gstaad Guy at a party thrown by a Luxury London delivery service.  He was polite, welcoming and introduced himself to everyone working at the party which is pretty rare if you’ve ever worked at a party during Fashion Week.

Congratulations on three years of Gstaad Guy that you celebrated recently with a huge party!  Let’s go back to the beginning. What made you want to create under Gstaad Guy?

Gstaad Guy – It was kind of an accident. I was having a facetime call with a good friend of mine. He was in Gstaad at the time and complaining about something trivial and ridiculous. I filmed a video exaggerating what he was saying and sent that video to his mother who circulated it to her friends who then shared it with their friends and so on.  A video of me just copying a friend of mine ended up going viral in the Gstaad community and when I got back to London someone stopped me in the street and said “Hey! You’re the Gstaad Guy” and I thought there’s something here and created an account because originally the video had only circulated over WhatsApp

Were you surprised by how well your content was received? Especially since you grew a fanbase so quickly

Gstaad Guy – I was definitely surprised how well the content was received and I thought my early jokes especially would only be relatable to a few hundred people.  I quickly realised that societies are a lot more similar than I thought and especially in this high net worth environment that my jokes are kind of targeted to, people laugh at themselves in similar ways.

Gstaad Guy – I definitely think I have more fun being Colton as he’s such a happy-go-lucky, life-loving and fun person and I think I have a lot more in common with Colton for sure. I think that Constance and Colton are both people that I hope not to have too much in common with, because they’re both ridiculous and snobby people but I think Colton is more fun and nonchalant and that’s something I hope I’m more like than the stuck-up pretentious Constance.

You’ve created content with the likes of Logan Paul and Mohamed Hadid, how did those collaborations come about?

Gstaad Guy – I’ve collaborated with people I’ve known for a very long time. Logan Paul and Mohamed are both people I knew for a long time before Gstaad Guy so that was very organic.  I’ve also collaborated with the late Virgil Abloh on a fashion show in Paris where I was the narrator of the entire fashion show and that simply happened because Virgil was a fan of the content. He reached out and we started to work together. It definitely created a lot of opportunities for me and introduced me to a lot of great people.

Is there one person you’d love to work with?

Gstaad Guy – It was actually a life-long dream of mine to work with Virgil in any capacity for a very very long time and I consider myself very fortunate to work by his side. That was always a dream and I’m really happy that I was able to do that.

But If I had to choose someone, It would be Sasha Barron Cohen

What would you do differently if you were starting in your industry now?

Gstaad Guy –  I would post more content more often, particularly on TikTok and I think I’ve always been very conscious of controlling the narrative and being careful about what I post which is kind of a double-edged sword because I was posting a lot less which means a lot less volume and smaller audience in the long term.

I think posting more content could be a better strategy and posting three times a day would help.

You always have something new and exciting up your sleeve, what’s next for you? Have you got any other projects that you’re working on?

Gstaad Guy – The projects are always exciting because they’ve always been surprises. I’m working on a few different projects and there’s one thing launching this summer that I think my fan-based particularly in Europe will be big fans of.  There’s something very refreshing and I choose that word very carefully.

What does a typical day in your week look like?

Gstaad Guy  – Every day is pretty different which is probably not the answer you’re looking for but I do have a day job and I try to do Gstaad Guy around that. I think it’s been a very good balance for me and for my mental health.  I think that being exposed to this world of social media can take a troll on people and having a double life where I have day job kind of separates the two and keeps me quite grounded

What’s one thing your fans would be surprised to learn about you?

Gstaad Guy – That I have a day job. I work in tech at a very large company that I will not disclose the name of.

And lastly, what would be the theme tune of your life?

Gstaad Guy – The theme tune of my life would be ‘The Best of Both Worlds by Hannah Montana. As a kid, I was a big fan of Hannah Montana on Disney Channel and it was my dream to live that double life of Hannah and Miley.  That’s something I’m still working towards by having Gstaad Guy and maintaining that private and personal life