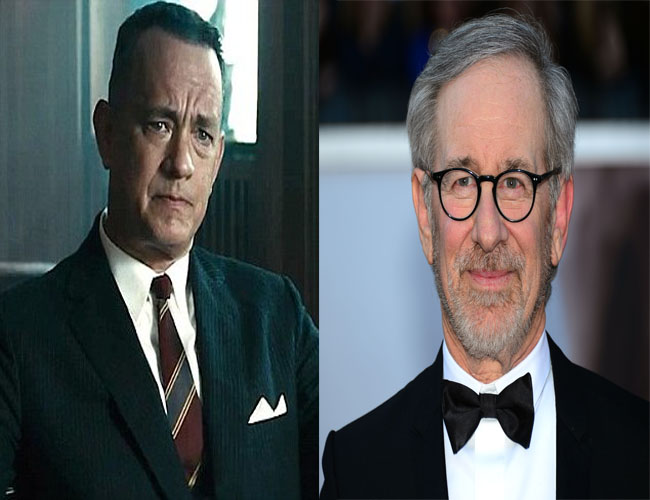 Steven Spielberg and Tom Hanks four-film collaboration is one of the greatest director-actor partnerships in movie history.

Hanks’ ability to convey an all American dignity, wholesomeness and an understated heroism matched by Spielberg’s mastery of every aspect of moviemaking have informed films as diverse as WWII classic Saving Private Ryan (1998), colourful caper Catch Me If You Can (2002) and charming character comedy The Terminal (2004). Now their fourth collaboration, Bridge Of Spies takes them into the cauldron of the Cold War as Hanks plays James B. Donovan, a US insurance lawyer recruited by the CIA to negotiate a swap between Russian spy Rudolf Abel (Mark Rylance) and US pilot Gary Powers (Austin Stowell). The filmmaker and actor talk about the origins of the film, their passion for history and the little-known beginnings of their remarkable partnership. With Bridge Of Spies, you seemed to have unearthed the last untold Cold War story?

Steven Spielberg: Somebody came to me and said, “Do you want to make a movie about Gary Powers being shot down above the Soviet Union in his U2.” And that might have been enough for one whole movie. But Tom and I later found out that there was so much more to it than that. We came to realise that, as incredible as it might seem, these events really happened.

Tom Hanks: My first question was, “Has it been done? What are we going to do? Go back and recreate the greatest hits of the Cold War movies?” I had no knowledge of James Donovan so this was all brand new human detail. It has to be a major bell that goes off so you say. “I didn’t know this.” So you can dig in.

At the centre of the film is the relationship between US insurance lawyer James Donovan and Russian spy Rudolf Abel. It isn’t the usual mismatched duo we’ve seen a million times before.

Steven Spielberg: It avoids stereotypes because the true-life incidents of Donovan and Abel avoided stereotypes. It was a very unlikely partnership. I wanted this movie to be the kind of relationship story where the audience couldn’t wait to see Abel and Donovan in a scene again.

And Tom, how did you create the magical chemistry you share with Mark Rylance playing Abel?

Tom Hanks: Donovan and Abel developed quite an affection for each other. With The Boss’ (Spielberg’s) permission, I called up Mark up and said, ‘Hey we’re in this movie together, let’s get together and run the lines if nothing else’. So he and I got together in New York. He’s an artist without compare. The film is about timeless values — integrity, moral courage — but it also shines a light on a lot of contemporary concerns and issues?

Steven Spielberg: Back, in those days, we had an eye on each other. These days we have a jungle of eyes on each other and not even when there is important information to be snatched. Today hacking is a sport. Occasionally a hacker will hit upon actionable information that can make him some money or get him to flee the country. Anyone who knows how to manipulate electronic devices can spy on anybody else.

Tom, Donovan feels like the quintessential Tom Hanks hero. Does it feel different playing a real life figure to a fictional character?

There are two versions of it. One is in which the people are still alive. That’s tricky. In the case of James Donovan, he’s passed away so we are not going to screw up his life by talking about it too much. There was enough footage of him that I could determine a number of things. One, I look absolutely nothing like him. It’s hilarious. That’s no big deal. But there’s the other aspect of how he addressed his mission as an insurance lawyer and how that impacted the movie.  My first job was to maintain that degree of integrity.

Steven, what are your earliest memories of Tom as an actor?

Steven Spielberg: I was a big fan of Tom in  (‘80s sitcom) Bosom Buddies. He also did a movie (Every Time I say Goodbye) in Israel that I liked a lot and then Volunteers with (Hanks’ now wife) Rita Wilson. So I was really acquainted with his work before we did The Money Pit. The first thing I noticed about Tom is that I never caught him acting. He said the lines as if there was no script, there was no director, no lights and he was just talking to me. And, Tom, when did you become aware of Steven’s work?

Tom Hanks: I was in 6th Grade.  We all went to school and talked about Steven’s episode of Night Gallery. It was like The Twilight Zone squared. Then a couple of years later, in the Oakland Tribune, Bob Mackenzie wrote his entire TV column and just said ‘There is this thing on TV that should really be playing in theatres.” And it was Duel. I went to Junior High School the next day and said, “Did-you-see-that-thing-called-Duel? Oh my God. There is hardly any conversation in it and you never even saw the guy driving the truck!” And then, of course, you throw in Jaws and Close Encounters Of The Third Kind.

So how was your first meeting?

Tom Hanks: I believe we sat and had a bite to eat. I could count on one hand the amount of times I got to drive onto any studio lot in town. I drove on and ran into Bob Zemeckis who had just been talking to Steven about Back To The Future. Then I went in to see Steven. I was petrified. I couldn’t believe it. I remember having, for me, a very stilted dinner because I was meeting — ya know — Steven Spielberg.

Is it true you were offered to direct Tom’s film, Big?

Steven Spielberg: It’s a true story. I was offered Big and I turned it down because my sister Anne had written it. (Producer) Jim Brooks and I had many meetings about this and he was very persuasive about my doing it. I said to Anne, “Here’s why I’m not doing it. I’m not doing it because you’ll get no credit for this great script you wrote. It will all go to me.”

How did you come to work together on Saving Private Ryan?

Steven Spielberg: One of the things we had in common was a tremendous interest in World War II. I knew that about Tom. He knew that about me. He knew about my dad Arnold (a radio operator on WWII planes), whom he calls Burt, and we talked about documentaries on World War II. I was in the kitchen of my house when I read the script of Ryan. I immediately wanted Tom to play Captain Miller. Little did I know that Tom had read the script and had the same reaction I had.

Saving Private Ryan, the TV miniseries Band Of Brothers and now Bridge of Spies reflect your passion and skill of telling little known stories from history. Why are you attracted to historical subjects?

Tom Hanks: We read about it for pleasure. I get into bed and I’m reading some 1400 page tome and Rita says ‘What’s that about?’ and I’ll say, ‘It’s about some arcane thing in the 14th century’ and Rita says, “Will you ever just read a novel?” And I say, “I’ve tried, baby, I’ve tried. But that stuff is just made up!”

Check out this EXCLUSIVE clip THE BEGINNING OF THE END – Steven Spielberg talks about The Cold War and his memories of this when he was a child and even remembering filling his bathtub with water as he thought it was the beginning of the end.

BRIDGE OF SPIES is available to own on Digital HD™ on 14th March & on Blu-ray™ & DVD on 28th March, courtesy by Twentieth Century Fox Home Entertainment.