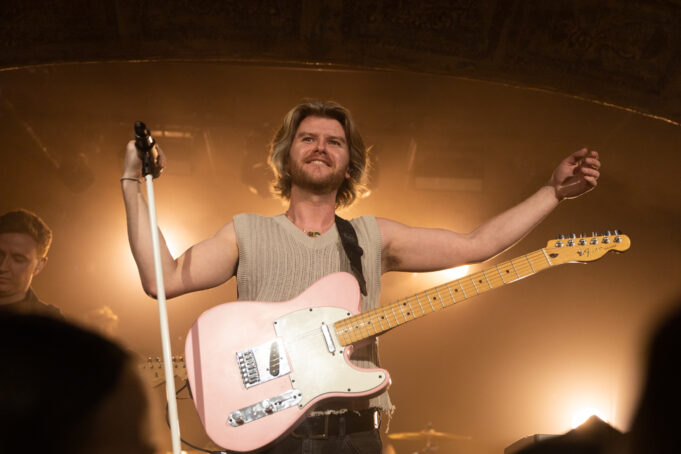 I arrived at the venue in Central London on a rainy afternoon where the band’s diehard fans were already huddled underneath a bridge outside in hopes of securing that front row spot.

It had been some time since I had seen Wild Youth in person so I was pretty happy that I could finally get something set up.  I walked into the venue where I was taken backstage to a low-light room to conduct the interview… (possibly living a diehard fan’s dream).

I was then greeted by lead singer David and we had an interesting conversation about the Wild Youth family and the return of touring.

Tell us about your new single?

David – Seventeen was created during the pandemic. We were lost for a long time during the pandemic and there was a good two years as you know yourself that we were all flipped upside down and we never knew if we would ever end up touring again or if we’d ever get to release new music again. It was a pretty scary place to be in.

We all kind of found ourselves back doing what we were doing before we played music in a way.  I was back home playing football with the lads and stuff like that. We were so busy before covid that we never really got to do it that much so we found ourselves reminiscing a lot and looking back at better and happier times. We kept talking about how life was so great when we were seventeen and our biggest worry was if the girl next door fancied us back or if the lads were going to come and play football or not.  Those were my biggest worries when I was growing up,  I never had anything traumatic going on.

We just decided we were going to write a song about it and it was a nice trip down memory lane for us.  Conor and I have known each other most of our lives so it was nice to go back and talk about those days. The feeling of being a rebellious 17-year-old.

Did the writing element change at all?

David – Conor lives in London so I decided to come over and talk about the track idea more. We’re very good friends with JC Stewart and we were all in the studio together in a very similar room to where we are now and we just started spitting the idea of the song. We also decided to get Tristan Evans from The Vamps involved and we asked him to try producing the track. It was a nice little project for us.

And as the track has been perceived so well already. Can we expect some new music?

David – That’s good! As long as they’re out of the rain and keeping safe. We don’t want them all getting hyperthermia

After the show, with all the adrenaline do you find yourself crashing? Do you have to find a way to wind down?

David – That’s a good question. I struggled for a while and when we started playing gigs, The adrenaline you get is like something I’ve never felt before. I can’t compare it to anything. I went through stages of getting really depressed after a gig and when I would come off stage and 45 minutes later I would still have the energy and I’d still be pumped but then it was a slope.  The energy gradually went down and would last 10 minutes and I was always chasing the feeling again and trying to stay in the moment as much as possible.

I don’t drink anymore before I go on stage as I think I just get crazy. I’m really present these days.

Do you think being more present makes you appreciate it more?

David – Yes definitely! I appreciate the moments more. I can sit back and breathe. I don’t have to be chasing this feeling anymore. I can experience it and naturally let it go.

With all the music you have released did you ever feel pressure to always match the high bar you set yourselves with each release?

David – Of course. It makes me so nervous and naturally, we’re all pretty competitive in this band and we wake up every day wanting to beat the person we were yesterday.  I think it’s about wanting to please people and I know it’s something that is almost impossible.

It’s a curse and a blessing. When they love the track, it’s the best feeling in the world and when they don’t you end up wanting to please them with something else.

What’s your favourite track to perform?

Is there anything you regret not doing since starting Wild Youth?

David – Hmmm. Maybe not having enough confidence in myself back then.  I think having a natural growth of confidence is better than being an egotistical son of a bitch. The fans helped a lot with the confidence but I wish the 15-year-old me had the confidence I have now.

What’s the strangest or best gift a fan has given you?

David –  It was my birthday last week

Oh me too! Can totally see that you’re a Pisces!

David- Well Happy Birthday! For my birthday, fans met me off stage with balloons and a teddy bear and when you pressed the hand it said “Happy Birthday from the babies”

David – It was! they also got me lots of sweets! But a strange present? I don’t think I’ve ever received anything strange which is good.

Very good! I once chatted to a band who said they received pubes in a box so count yourself lucky I guess

David – Yes no pubes in a box for me, please!

What’s your favourite thing about the Wild Youth family?

David – They are all so fucking nice. A girl flew from America to our Dublin show last week and she didn’t know anyone but before I knew it she was in with twenty of our die-hard fans and now they’re all the best of friends. She wrote to me after the gig telling me that she had met the best friends in the world. I’m like that’s not me that’s them, the fans are so fucking cool.  They are so supportive of us and they come to everything we do.  We’re very lucky to have fans like this.