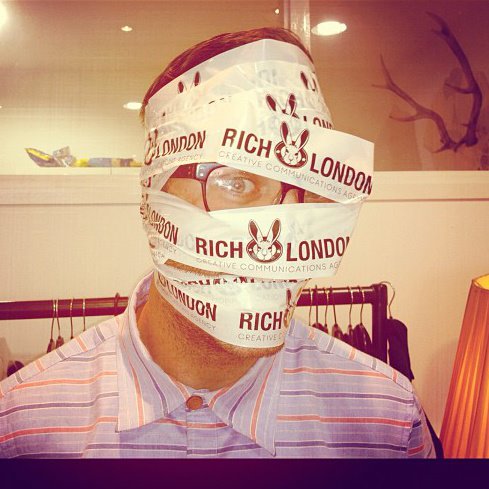 Richard Evans, owner of Rich London PR and Stylist, talks to Flavour about his journey into  the fashion industry.

Tell us a little a bit about how you got into fashion?

After flunking college I decided to travel on my own around the world, which allowed me to mature and meet a variety of different people. In Australia I got some work experience at a men’s magazine called Ralph, the Australian equivalent to British FHM. After contacting them I was called to interview a few weeks later. I was totally blown away by the amazing office, models and celebs walking around, and surrounded by clothes. It instantly dawned on me that this was the life for me. I stayed late , made tea, cleaned draws and contributed my ideas wherever possible. I worked on a building site before work to pay my rent so I could stay on the magazine as long as possible. Eventually they offered me the role of Fashion Assistant  and before you knew it I was Junior Fashion Editor. I stayed there building a portfolio but when I returned to the UK with no contacts, even though I had paid experience, I had to start from scratch again. I begun working for free again, assisting on shoots and doing internships. There were only a handful of men’s magazines I wanted to work for so I kept pestering them, but I had to sit tight until a position came up. Eventually I got the role of Fashion Editor at FRONT magazine and remained at the position for 6 years. It was the glory days of the ‘lads mag’ so working there was good fun to say the least. I worked my way up to Associate Editor of the magazine and at that point I was getting lots of new opportunities. I decided to work freelance so I could juggle lots of different fashion jobs from a home office. What inspired you to start your brand?

Whilst  freelancing for a lot of different magazines and styling a number of bands, I was single handily hitting some PR agencies targets. They would say thanks with a free gifts but it got to the point where I had enough trainers and watches. I’d rather have the money! realizing that’s just what a pr company does, takes money from brands to get them exposure. I got myself a logo and became a PR company. Have you had an educational background in fashion?

I did study fashion promotion but failed it. I’m dyslexic and my attention span is zero. If I studied in a jail, I would have probably passed with flying colours. But fashion isn’t about exams and reading books its about real life, going out, socializing , travelling and having hands on experience of trends for yourself. Funny thing is I’m the only person from my class that works in fashion and the college now pays me to be a guest lecturer. Do you think that money is important aspect to ‘make it’ in the industry?

Yes and no… If you have money from parents it gives you security and enables you to intern and not have to work part time. You can buy cameras and designer clothes, however money cant buy you ‘determination and knowledge’. Rich kids seem to think they can just sail into the sex in the city lifestyle but more often than not they lack the ‘like ability factor’ and the willingness to get their hands dirty.

To what extent do you agree with the statement ‘ It’s not what you know, it’s who you know’.

I think that statement is made up by ‘green eyed’ people who don’t work hard enough, don’t make it and eventually give up. I’d say: ‘’What you know and what you do, makes you who you are. Who you are will open doors for you and make the right people like you’’

Have you got any advice for budding entrepreneurs and designers hoping to succeed in the fashion industry?

Get as much work experience as you can in places you would actually like to work. Once your there ask questions, work hard ,and never complain. If your any good after 4-5 internships you should really get a paid role. if not you need to either change your approach or try something different.

For more information on Rich London PR and projects there working on visit www.richlondonpr.com