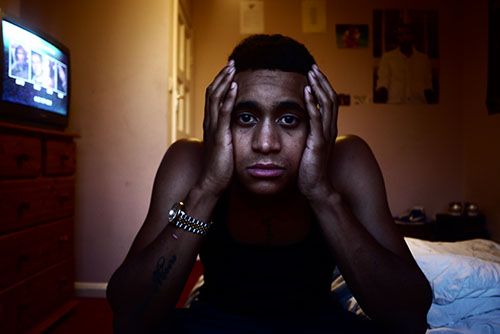 Though he may have only discovered his genuine talent for singing whilst on the X Factor a few years ago, Curtis Moore can now count the likes of Cheryl Cole, Simon Cowell and Aggro Santos as fans. His brand new single ‘Number 1 Girl’ taken from his forthcoming debut album, will undeniably propel him in a stronger position as the spotlight around him grows ever brighter. Flavour caught up with Curtis to discuss X Factor rumours, Cheryl Cole, his ‘number one girl’ and cougars.

What’s the story behind ‘Number 1 Girl’?

It’s about that one in a million girl, the girl who is different from the rest. The song kind of tells a story about that, it wasn’t written about a situation I’m going through, but it was made about that number-one girl whom we all want.

Who’s your number one girl?

I’m still looking for her, I guess she is out there somewhere

Since the X Factor, has it been easier for you to meet girls?

Yeah it’s been great, and I’m loving the attention, especially when they tell me they are a fan of my music.

Would you follow in One Direction’s cougar-lover Harry Styles footsteps and go for an older woman?

Yeah man why not, anyone could be that number-one girl no matter what age you are; life is like that.

You appeared on the X Factor at age 16. Looking back now, is there anything you would’ve done differently?

Not really because I was young and inexperienced and had a bit of an attitude. I had never performed before, so it was more of a stepping-stone for me.

Simon Cowell described you as: “One of the most current artists we’ve had on the audition process. I think you’re really talented. I actually like you. How do you feel about that?

I think some of what he said is true because these days any young mix raced boy who can sing, and is current, can pretty much do well. So I guess it just reassures me that as a person and an artist my music will sell.

We’ve heard rumours of you possibly working with Cheryl Cole, who once said she liked you because “You had a little bit of swagger”. Any truth in that?

You heard rumours? Really? [Laughs]… No there’s no truth in that, but however, anything can happen that’s what I say. So who knows what the future holds.

Have you, in fact, got your sights set on working with anyone?

I have but I love the element of surprise, and I want to surprise people, so I’m going to keep that one to myself. At the peak of X-Factor mania, you were labelled as an ‘X Factor thug.’ What’s the craziest brush with fame you’ve had?

I mean I’ve been called a lot of things by a lot of people but to be called that by one of the biggest papers in the country is just bizarre. I have had my problems, but that’s all behind me now.

A lot of X Factor acts like One Direction, JLS, Cher Lloyd and Misha B are doing really well, but then some X-Factor contestants like Leon Jackson have faded away. Does that worry you?

Good question! I think it’s all about staying relevant to people, and I’ve been through a lot of stuff that other people can relate to. I’m just going to keep doing my thing regardless so that doesn’t really bother me.

Can you now go out without being noticed by the public?

Yes the majority of the time, but I do get stopped sometimes.

How is your debut album shaping up?

It’s coming on nice. I’m kind of just in the process of finding that right sound for it. I don’t want it to be half good I want every single track to be a hit, so I’m just taking my time whilst experiencing more things so it gives me lots of ideas to write about.

What are your thoughts on this year’s X Factor apparently featuring finalists performing alongside holograms of Michael Jackson, Amy Winehouse and Elvis Presley?

I don’t really watch the show much, but they do need to change the format. And the show definitely needs to be taken to another level, but I think the idea of holograms sounds awesome.