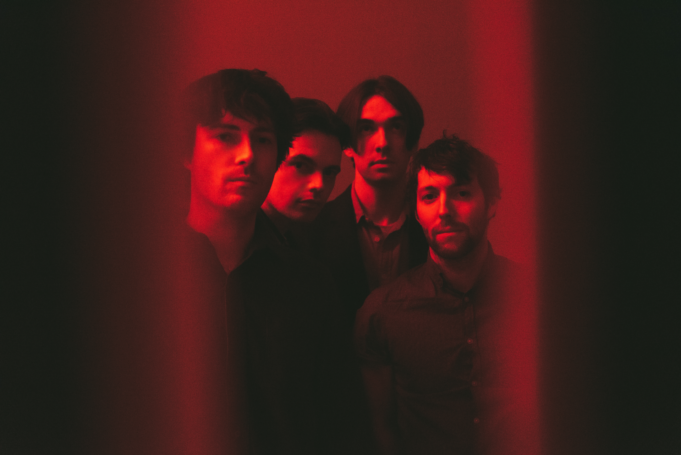 Over at Flavour, We’re huge fans of the Irish music scene and have supported the likes of Picture This, Wild Youth and The Academic since they first broke. We now have found new love with post-punk quartet TV People.

Made up of lead vocalist Paul Donohoe, fellow vocalist and rhythm guitarist Len Rochford, bassist Rob Kavanagh and drummer Brendan Clarke. TV People are set for bigger things with the release of their new single ‘Time Eats Up’ already getting raving reviews, I’m sure we will be seeing much more of them once the crisis is over.

I chatted with Paul about new music and the challenges of being a rising band in Ireland.

Paul – Len, Bren and I all met in college a few years ago. We were all studying in different places around Dublin but ended up getting to know each other through music. We used to meet up and jam fairly casually. We were mainly just hanging out and enjoying playing together. Bren and Rob were friends through work and when he joined last year we started to take it a bit more seriously and TV People took off from there.

Tell us about your new single ‘Time Eats Up’. What inspired it?

Paul- ‘Time Eats Up‘ was written last year when I had been out of a job for a few months. At that stage, I had passed the period of enjoying unlimited freedom and was starting to feel the stresses of sitting around with nothing to do. We tried to capture those feelings in the song when we were writing it. Bits of it are very fleeting and easy on the ear but there were a few rougher sounds there to get across the more sinister side of his headspace at the time.

TV People seems like it would garner some attention, is there an interesting story behind the band name?

Paul – We spent a fair bit of time trying to think of interesting band names and had some pretty terrible ideas before settling on TV People. Bren came across the name when reading a book of short stories by Haruki Murakami and ‘TV People’ was the title of one of the stories. We like the surrealism of Murakami’s work and felt TV People was a name that would work well with our music and be an interesting concept as a foundation to build up the vision of the band.

If you could support any artist or band and choose your own rider, what would that entail?

The Strokes and cans.

The Irish music scene is filled with some great bands at the moment, did any of them influence the music you create?

Paul – When you’re in such a diverse and talented place as Ireland there’s always a chance of being subconsciously influenced by the acts you’re seeing playing around. We’ve always had a very clear vision of how we wanted TV People to sound though and we try to stick to that as much as we can. A few Irish acts that we’re big fans of though are Silverbacks, Just Mustard, Skinner, Powpig and Fontaines D.C.

What are the challenges of being an emerging band in Ireland right now?

Paul- The main issue for us at this stage is keeping the band funded which is probably a fairly universal issue for most emerging bands. Getting stuff recorded and mastered puts a fairly big dent in the bank account along with renting rehearsal space and trying to transport gear around for gigs. We put all of the money we get from gigs and merch back into a band fund to pay for recording time or whatever else is needed. We all do this because we’re passionate about the music we’re making so we’re not too worried about the money side, but we’ve all definitely had a few lean months when a lot of expenses pop up at the same time.

Paul – Glastonbury. None of us has ever been but it’s an iconic festival and has had some of our favourite live performances by bands we’re fans of.

One track that would be on your tour playlist?

Once this crisis is over, what is the next step for the band?

Paul – We were planning on making 2020 as productive a year as possible a few months ago. Obviously, the current situation has put a lot of things on hold for an indefinite amount of time. We’ve had plenty of gigs cancelled and recording dates moved. We’re going to be writing a load of new stuff over the next couple of months and we’re going to be releasing as much music and playing as many gigs as possible once everything starts returning to normal. We have a headline show in Whelans in Dublin on the 24th of October which we’re extremely excited about because its one of our favourite venues to play. After that and our next few releases we’re probably going to look at recording a more long-form project.