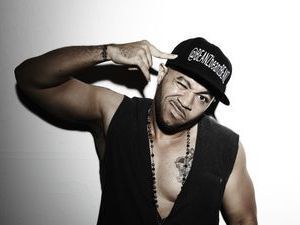 A lot of US artists have Jim Beanz to be thankful for giving them hit records including Katy Perry, Britney Spears, Shakira, Timbaland, Missy Elliot, Nelly Furtado, Keri Hilson, Jamie Fox, Jennifer Hudson, Ciara, Justin Timberlake, P Diddy and The Pussycat Dolls. Timberland’s protégée is now working his magic on some UK artists including Cheryl Cole who he produced ‘Sexy Den A Mutha’ for and is now in the studio with JLS, Little Mix and Dionne Bromfield.  Shireen had a chat with him about being a 5 star threat, Timbaland and being a producer/vocal producer. What was it about you and your style that led Timbaland to notice you?

Timbaland noticed me from my vocal production skills but also because I started doing vocals myself on a few of his songs, and a few vocal arrangements I did for Nelly Furtado and things I did for Justin Timberlake. From there he also started to notice that I could produce.

Timbaland invited you to work on Nelly Furtado’s ‘Loose’ album with him. Were you just thrown in or did he give you any pointers?

The first song that we worked on was ‘Man Eater’. I was thrown in (laughs). I guess there are so many people that come in the Timbaland camp that are there one day and gone tomorrow. That was my big shot to show I had the ability and stay in the camp and grow from there.

How was the chemistry between you and Nelly Furtado when you first worked together?

The chemistry was magnetic it was amazing because she was very artisty, and she noticed I was very similar in terms of my ideas when it came to vocal arrangements and doing weird sounds with our voices.

You have been called a ‘5 star threat’, because of the five separate talents you can bring to any project you are working on. Which of the 5 would you class as your main forte?

I would say production, writing and vocal production. Those are the three top. As far as being an artist and a musician, I kind of stray away from the artist side. One day I think I’ll go in the artist direction, but right now I’m enjoying building music from scratch and working with different artists.

For those out there who are unfamiliar with the term, can you break down what a ‘vocal producer’ is, and in what ways does your voice play such an important part in your music productions?

A vocal producer is basically a person who guides the artist. A lot of people think the artist just goes in the booth and sings whatever and they keep that. The vocal producer is the person who directs them and tells them how to sing a song. For example on of the first songs I produced with Timberland where I didn’t have any keyboards or anything. We went in the booth and I did the whole song from scratch with just my voice. You recently worked on Cheryl Cole’s ‘A Millions Lights’ album. How did you meet and what made you decide to work with her?

I took a train to New York to meet Cheryl, and it was just meant to be a session to see if she liked the vibe, and if she didn’t we wouldn’t go any further. She loved working with me so we went from New York to Los Angeles and finished off in London.

Your over in London for the summer working with some UK acts such as JLS, Dionne Bromfield and Little Mix. Can you give us an insight into what you’re working on with them?

I’ve come in at the end of each artist’s projects except Dionne. They all had their albums pretty much strapped up, much like the Cheryl Cole album was, and they called me down because they were looking for a lead single, a clubby single, that smash song that people just want to hear on the radio and in clubs. I came in and I delivered and we had some great sessions.

Have you noticed any UK artists you would want to work with?

I’m meant to be going in the studio with Professor Green in September. They were telling me that wanted me to go in with an artist called Dappy but I haven’t had a chance to yet. I love Emeli Sande I think she’s amazing. There’s another artist I met years ago, but I lost contact with and I thought she was amazing is Paloma Faith.

You wrote the 2008 winning Eurovision song ‘Believe’ – a great achievement in the eyes of the world, but what would you say has been the crowning pinnacle of your career to date?

‘Sexy Den A Mutha’ song I did with Cheryl Cole. It was sort of like my bridge over to work with more UK acts, because of her a lot of other UK acts have heard my talent and want to work with me.

What made you decide to come over here to work with UK acts?

I’ve been coming over here for a while; I’ve always loved the music in the UK. I was a fan of Jessie J before she even reached this stage and Taio Cruz. Everyone’s sense of enjoyment of music is a lot broader over here, and there so much more open to hearing different sounds.

You have your own label, Millennium Kid Music, and are signing new talent yourself. Is there anyone you have come across that we should look out for?

I just signed two writers in the States, and one producer in the UK his name is Troy Boi. He’s an amazing producer, but even now I’m still looking for writers and producers to add, were constantly growing and getting bigger projects, and I would love to share the success and the ability to get peoples music out there to the world.

There’s a guy called Dot JR I’m working with he’s great. Right after I leave him I’ll be back in the States finishing up on Shock Value III with Timbaland, and also helping out on the Missy Elliot album. Justin Timberlake is also in the studio, so I’ll also be helping him out.