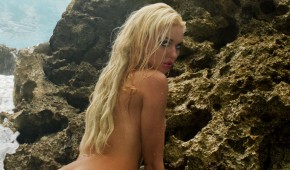 It seems so long ago now that we held iCandy iCon and that’s probably because it was. It was last October in fact, but aside from the main event there were one or two side acts which you may remember one of them was a dancer of a certain ‘booty shaking’ style. Agnes or Lithi as she’s known held the crowd in the palm of her hand as she gyrated, ground, split and shook her way around the floor. But not only do those curves dance and prance – they model too – so here’s Lithi!

Lithi welcome to iCandy how are you doing?

I am very good thank you xx

So, what have you been up to since we saw you at iCandy iCon?

I did some modelling in Miami, music videos, lots of partying, and I am getting my degree now as well 🙂

How did you get into dancing?

I loved partying-dancing-urban music since I was a very young age and I just picked the moves as I was going out. I never went to a dancing school or had dance lessons or anything like that.

I’m Lithuanian, I moved from Vilnius to London after I finished school, now I’m waiting to get my marketing degree.

Do you get hassled much when you’re dancing?

Usually people show me love and support. If they see me dancing for the first time there’s lots of surprise and excitement!

Do you get girls getting jealous of you moves and abilities?

I’ve had few incidents with black and white English girls but I’ve never had any problems with Jamaican girls, maybe it’s cos they have it themselves (Laughs).

What videos have you appeared in?

Beenie Man – Back it up; Shaggy – For Your Eyes Only; and few other videos with different artists in Jamaica; and in the UK you can see me on Chip, Krept, Konan, Yungen – Go Down South, Pound Sterling, Rack City Remix, Hyperactive – famous, and few others.. Also look out for my sexy promo video from the Rap City.

When did you learn that you could jump and land in the splits?

This is a funny question (Laughs). I didn’t just learn that, I can do that, but I learned how to do that when I used to go to street parties in Jamaica.

Do you use any of your moves for *cough* other reasons?

I try and do things in life that I enjoy , so then I’m more likely to be successful and happy.

Shopping, travelling around the world or watching some American comedy or reality show.

What’s on your iPod at the moment?

I like most of the new school hip-hop & RnB, and from the dancehall scene I just listen to Vybz Kartel and Movado mainly.

What do you look for in a guy?

I definitely like when a man is tough, doesn’t chat like a girl but can make me laugh. He has to be cool, smooth and have kissable lips.

Complete the sentences: The naughtiest thing I’ve done is…if the definition of naughty is sexual, then I can’t really pick one but I like to do it in different places not restricting sex to the bedroom.. If you mean criminal, then I better be quiet.. (Laughs)

My biggest turn on is... sexy sexy kissing..

The way to impress me is… to take me on a nice sweet holiday.

My superpower would be… in me being a winner: everything I want – I get!

My wish is… to end up somewhere like LA: a big city that has all the action, beach and nice weather.

Lithi thanks for being with us again! What’s your message to everyone out there?

Stay positive. If its not happening now it will happen later. Xx