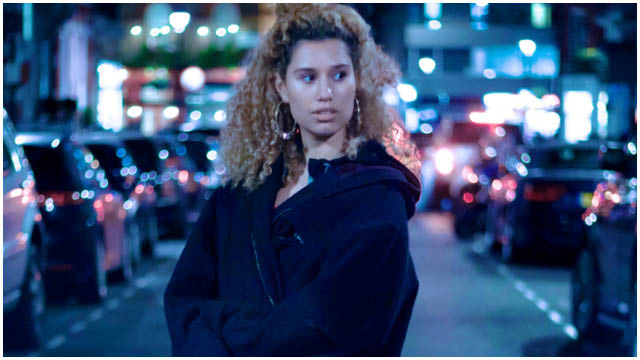 British musicians have been making huge waves overseas in the last few years, with the likes of Ed Sheeran and Sam Smith among the nation’s most successful exports. If 17-year-old Rachel Keen, known professionally as Raye, is anything to go by, the upsurge in home-grown talent has no signs of slowing down any time soon.

In less than a year since leaving The BRIT School, which can namedrop Adele, Amy Winehouse and Jessie J as former students, Raye has built a strong following online with her fusion of electro beats, pop melodies and R&B-tinged vocal deliveries. Hailing from South London and writing songs since the age of 10, she released her debut EP, Welcome To The Winter, last November to rave reviews, before inking a publishing deal with Warner/Chappell UK the following month. A recording deal with Universal Music Group’s Polydor Records followed earlier this year. Not bad for someone who was once turned down on Britain’s Got Talent.

With a major record label in tow and new music already on the airwaves – she co-write the forthcoming single by deep house duo Blonde – 2015 looks set to be a great year for the rising star. She caught up with Flavourmag to discuss the journey so far and her plans for the future.

Nathan: Congratulations – you’ve just signed to Polydor Records! How were you discovered?

Raye: It’s been a really long process. I’ve been writing music since I was a baby and I decided that was what I wanted to do with my life very early on. I was lucky enough at my old high school to find this guy, who was a guitar teacher and wrote songs, and the two of us started writing loads of music together with my dad. He had a friend who was a Sony producer so he took me to him. We started making songs together and then I met his boss [laughs], a guy called Will, who’s my manager today. So one thing led to another.

From there I started doing some writing with loads of writers and was getting better and better at it. When I was 15 I wrote this one song called Hotbox, which is on my EP today, and everyone started to hear it and get really excited about it. Lots of people wanted to meet, but we held back until we put an EP out. We then spoke to a few labels and Polydor were just crazy perfect, so we went with them [laughs]. It’s a complicated story.

These days it’s quite rare for an artist so young, who’s not from a reality TV show, to sign to a major record label. What do you think about shows like The Voice and The X Factor? Did you ever consider going down that route?

Yeah, of course I did, when I was young, before I even knew there was another way in. I must have been about 11 or 12 and I auditioned for Britain’s Got Talent. The producers called me back, but I didn’t make it [to the auditions in front of the judges], thank God, because they’re a bit crazy – you sign these crazy contracts and you almost don’t have another option. I think now, being a bit older and understanding what sort of prize you do get and the conditions of it, I just wouldn’t do it. But, I think it was always so interesting to watch and dream of being in front of loads of people and singing.

For anybody that’s not familiar with your music, how would you describe your sound?

Pop, R&B, electro. It’s pretty simple – pop melodies, but I love R&B music and those kinds of beats, so [my sound] is all fused into one.

People online have already been comparing you to Rihanna. What do you think about that?

I think that’s crazy! I’ll take that any day of the week [laughs]. Who would not want to be compared to Rihanna? I’ve had it a few times, because I’ve got a kind of gritty voice, but that’s such a good comparison; I cannot complain.

Is she someone you’re a fan of or look up to?

I love her music and I think she’s absolutely beautiful. All of those people, like Beyoncé and Rihanna, all the big coloured women doing it, I love it!

Who are the artists you listen to and take inspiration from?

I love Drake so much, OVO Sound, The Weeknd – they’re all a big part of my vibe. I love Jill Scott, Lauryn Hill, Nina Simone, Ella Fitzgerald. I’m a muso [a big music fan]; I just love music.

Your debut EP, Welcome To The Winter, received a lot of support online last year. How have you found the reaction to your music so far?

It’s only the beginning; I didn’t expect anyone to get it, let alone this all to happen within three months. It’s been kind of crazy, but I’m so happy… You have all of this stuff in your head, and I’ve been writing for so long, so to finally be able to put something out, and have people like it and listening to it, is just incredible. I just can’t wait to keep going.

Your most recent track, Flowers, was well received too. What was the story behind writing it?

All my friends are so loved up and they’re all like, “Aaah boyfriends”, but I’m just not—I was just kind of thinking about it and how my friend must have got some flowers from her boyfriend, and I was like, “Oh my God!” That just doesn’t cut it for me [laughs]. It’s the same as the phrase “words are so easy to say”; flowers are so easy to buy. They just don’t mean anything. I don’t think girls, in general, should settle for less or settle for something small, like fall in love with a guy who just gets her flowers. There’s so much more to life and [giving flowers] is just such a small little action. They have to show you that they love you, so that’s kind of what I was getting at.

You also co-wrote the new single by Blonde, All Cried Out. How did that come about?

Through my publishers, because I write music, I’ve started writing a lot for other people and hopefully we’ve got some really interesting cuts coming up. There was a guy from Parlophone who heard my style and there was a section in the song, which they wanted someone to write to, so they sent it over to me and I recorded it. They said it was perfect and were going to use it, which was amazing, and I think they want me to help them out with some of their next singles. Off the back of [All Cried Out] other people want me to do some writing too, so it’s really cool and opened up a lot of doors, which is amazing.

How important do you think it is for artists to write their own songs?

I mean, clearly looking at someone like Rihanna, she doesn’t really write much of her music, but she can still perform it and sing it as if it is her own work. I just feel like if you have a story to tell and you can perform that story, it makes it more powerful. It’s something that’s very personal to me, because I’ve been doing it for so long. It’s like poetry or storytelling.

It’s my outlet, so for me as an artist, it’s so important to write, but that doesn’t mean if an incredible song came along, which I hadn’t written, I wouldn’t want to be involved in it… It’s more about the song and what it says. But, right now I just feel like I’m at a place where I have so much to say [laughs]. I enjoy it; it’s one of my favourite parts [of being an artist].

Where can people see you perform this summer?

I’ll be playing The Great Escape and there are a few others that aren’t public yet. I might be doing a headline show later this year, but it’s yet to be confirmed. I might be doing a support [gig] too. Everything is being confirmed right now, but we’ve got a lot of stuff coming up, so it’s exciting.

Will you be debuting new music?

New music is coming very soon actually. I think I’m putting out another song this month.

Can you give us any hints about what we can expect?

I love it! I’ve been waiting to put this song out for a while. We’re going to put out a little visual video with it as well. I’m just really excited and I can’t wait to put it out. Hopefully people will get it like they have the previous songs.

Everything is looking so promising for the year ahead. Where do you hope to be in three years’ time?

Right now I’m all in. I’ve left school, I’m writing. Every day of the week I’m giving it everything I have. So if I can continue to work as hard as I am, I’d hope in three years to be in a very good position [laughs]. I don’t want it to come across big-headed. I just think good things come to those who work hard and hopefully, if I work hard enough, I can be in a really good position in the next three years. That’s what I hope anyway.