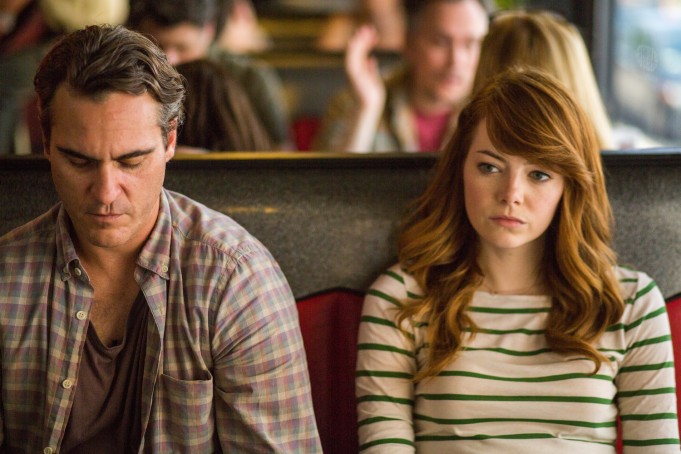 The new outing by Woody Allen comes with the likes of Joaquin Phoenix and Emma Stone as our leading characters your typical Allen film.

Philosophy professor Abe Lucas (Joaquin Phoenix) is a tormented man, unhappy with his life as he settles into a new job and new town. Emotionally drained, with nothing to make him happy he finds solace in the form of alcohol. Shortly after arriving at his new college the rumours start to make the rounds about his life and he attracts the eye of Rita Richards (Parker Posey), a fellow professor and student Jill Pollard (Emma Stone).  This is the start of any predictable Woody Allen movie; the man is fascinated with always having a not quite conventional love interest with a twist.

Rita is your typical middle aged woman, bored with her life and her husband and looking for a bit of excitement, she has a dream to move to Europe in order to fulfil her life. So Abe, being the mysterious man that he is, is a prime target for her affections. Well when I say affections, their actual “relationship” is based on sex and not much else. Jill Pollard, being a middle-class student with a well-rounded boyfriend is instantly attracted to the life Abe has led and his brilliant intellect.  It becomes just a little mundane and offensive that Allen simply cannot write about any other kind of character apart from those that come from a background which they have never had to struggle. Some say he is brilliant, I say he is blind and doesn’t have that much of a creative side. Abe’s relationship with Jill becomes quite intense, and after the pair overhears a distraught woman’s tale about a corrupt judge Abe becomes obsessed with wanting to do something about it.  Abe’s plan, which he keeps to himself, see’s a new lease of life take over and he has a reason to love life again but set’s off a chain of reaction of events that effects all in his life. However, we never feel the intensity play out on screen as each of the darker moments are fused with subtle humour and the sound of light-hearted piano music tinkling away lifts the mood throughout most of the film.

Phoenix seems to a natural throughout the whole of this film, with each speech and footstep simply rolling out of him as if he is this character. Phoenix is yet again flawless in playing a character who is deeply depressed most of the time to being injected with life. Stone, on the other hand, comes across as a little over the top and her unbelievable naivety would be better off on a stage. Irrational Man has an abundance of beautiful cinematography; in fact its soft hues almost feel autumnal, and with its subtle gentle humour gives it a warm fuzzy ambience, which for basically a thriller is a bit strange but it seems to work. Unfortunately for this film it just has no oomph making it seem just a tiny bit flat.

Irrational Man is out in UK Cinema 11th September.