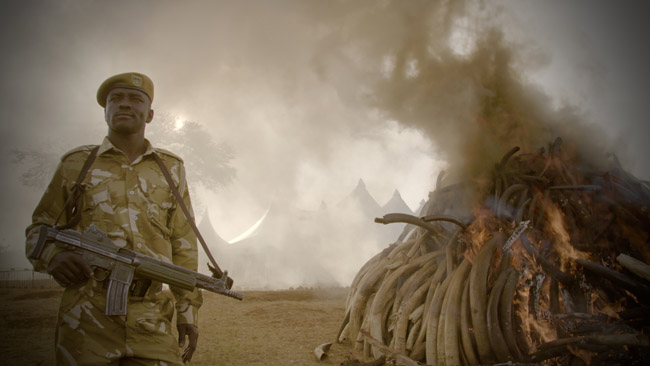 The Ivory Game is a groundbreaking documentary that tracks wildlife activists as they take on poachers in an effort to end the illegal ivory trade in Africa. It is a harrowing globe-trotting affair as we meet the people who put their lives on the line –entrenched in the deep heart of darkness fighting for the survival of the elephants.

As the film opens we are treated to some disturbing statistics. The elephant’s numbers have been decimated over the years at such a rate – that if it continues they will become extinct in the not too distant future. The statistics and data we read are superimposed onto a graveyard of elephant tusks that creates an eerie yet striking visual image. This penchant for cinematic visuals continues throughout the documentaries runtime which creates a work of art that is not only heartbreakingly informative but also has flourishes worthy of a big screen blockbuster.

As it is a Netflix release it’s a shame that this will be lost somewhat when streamed on laptops across the world when it is released next week. Because The Ivory Game is a rare documentary indeed – as it’s aesthetics almost beg you to watch it fully realized on the big screen.

Far from being a BBC planet earth type meditation on the plight of the elephant – The Ivory Game is almost The Bourne Identity of conservationist documentaries.

It’s equally adept at being a tense thriller as we are thrust onto the frontline of a 16-month undercover operation trying to infiltrate the corrupt global network of ivory trafficking -that in some cases go as high as government officials. The film takes place in different parts of Africa, China, and Vietnam -as various storylines and activists’ missions are woven together so expertly that you become as much involved with their plight as you do with that of the elephants. There is one storyline involving a notorious poacher that has eluded authorities for so long that he becomes almost like a Pablo Escobar type figure from the TV show Narcos – you have a great urge to see him brought to justice. There is a Chinese journalist who risks his life to go undercover that I found a very fascinating figure as well. His quiet unassuming nature is in stark contrast to the classic macho man type physicality that leading men in Hollywood are often possessed with. Heroes in real life are often ordinary people with a strong set of moral principles and an unwavering desire to actually do something to change things. Even if it has potentially grave consequences for their own well–being in the process. This documentary is filled with heroes like this, that you can’t help but feel a great sense of admiration and respect for.

Curiously enough, the elephants take quite a back seat to the activists in this documentary and have very little screen time. Perhaps this was intentional too as the elephants in a sense have very little say in their own outcome. As the governments that allow the ivory to be sold – the people that buy and traffic the ivory -have such a disconnect when it comes to anything resembling compassion for these creatures -It makes sense to present the fight for their survival in that manner. In a similar vein to documentaries like The Cove and Cowspiracy, The Ivory Game will leave you feeling frustrated, extremely embarrassed of the human race and a sense of hopelessness for the future of our planet – as greed and inaction further contribute to its destruction.

The Ivory Games is available on Netflix UK from November 4th.