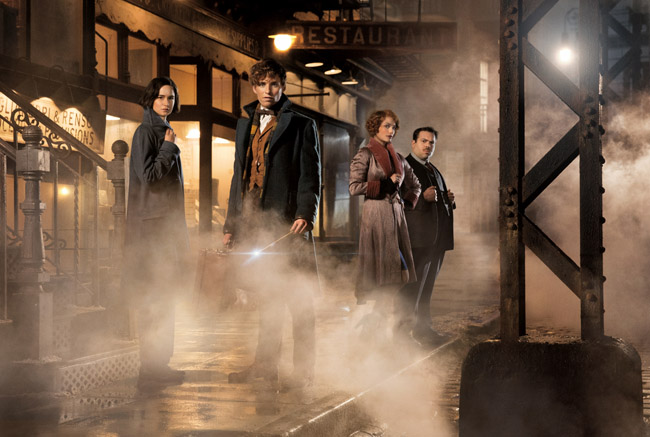 Last night saw hundreds of Harry Potter fans descend on London’s Leicester Square for the Global Fan Event of Fantastic Beasts and Where to Find them to catch a glimpse of the cast at a Q & A as well as to watch some previously unseen footage from the film.

As well as London, Fans from around the world such as LA, New York, Rome, Sao Paulo and Mexico City gathered in Theatres to watch the live stream of the event. London’s Empire Cineworld held court with a Q & A session with cast members Eddie Redmayne, Dan Fogler, Katherine Waterston, Alison Sudol as well as Director David Yates. LA also had John Voight and Colin Farrell join in the magical fun via live satellite link up.

The event, which was packed with wonderful wizarding costumes on display from the film saw fans delighted as they were handed a special wand and goody bag which included a special Fantastic Beasts poster made especially for the event. The cast revealed, and came across completely overwhelmed by the whole experience and being involved in such an important part of film history and felt an enormous pressure to get it right. There was one special cast who managed to tear the roof of Empire’s Cineworld with the fan reaction as she walked out on stage, Creator of the Harry Potter world and 1st time screenwriter J.K. Rowling.

The biggest reaction came when Rowling revealed that Fantastic Beasts has gone from being a trilogy and there will, in fact be 5 films in the new spin-off franchise Fantastic Beasts and Where to Find Them.

Check out this new Fan Featurette which was revealed at the event last night.

Watch the Q & A in full below.