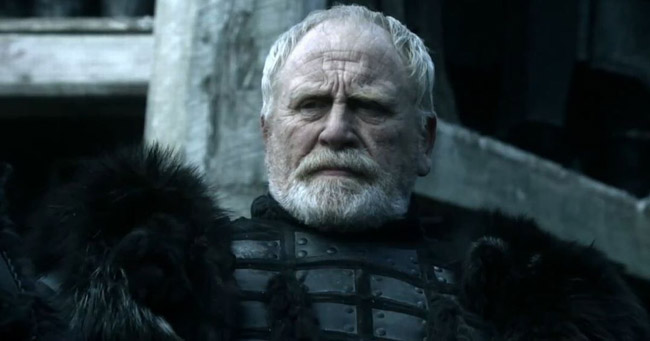 It has to be said, James Cosmo as been one of the few actors whose face has graced the big and small screens of some the most epic and culturally defining shows and films throughout the whole of a career which spans a staggering 50 plus years, the man who is known for his hulking frame, has finally laid bare his emotional side in The Pyramid Texts with a career defining performance.

The role which saw Cosmo win the award for the Best Performance in a British Feature Film at the 69th Edinburgh Film Festival as veteran boxer Ray in The Pyramid Texts, which is available via Itunes, Amazon and Google Play from the 28th of April, has Cosmo go beyond in delivering a beautifully touching and immensely powerful poetic dialogue in which Ray (Cosmo) bears all his physical and emotional scars while desperately trying to reconcile with his estranged son.

To celebrate the release of the film and quite frankly to give it as much support as it truly deserves, we sat down with James to talk about the film and some moments from his career. If there is one film you should, without a doubt, see this year, The Pyramid Texts needs to be it.

So The Pyramid Texts is just you set in a boxing gym as a backdrop delivering a 90-minute poetic monologue – How did the whole project come together?

I met with them and the writer Geoff Thompson about another project that they wanted me to do. Geoff and I went off, had lunch and spent the whole day together talking about what sort of films we like and what we would like to do. It wasn’t until six months when I was filming in Tenerife, the script came through for The Pyramid Texts. It took me three days to read it because every time I started to read it, I would get twenty pages in, it got too emotional, then I got fifty pages in and couldn’t do anymore. So it took three days to finish the whole thing and I thought I really can’t do this but I knew in the back of my mind I really had too. It was a very symbiotic relationship between the actor and the writer, although I had no influence on what he wrote.

The film was made quite some time ago, why has it taken so long to get a release?

The progress of it has been slow, the directors, The Brothers Shammasian took a long time getting the sound, music and editing just the way they wanted it. It’s such a hard job for first-time feature-length filmmakers to get a real platform, even though we won best actor at Edinburgh Internation Film Festival, It’s still very very hard to get it out there. So, they’ve been battling to get it up and least we have it up on Itunes, Amazon and Google.

I was a blubbering mess come the end of the film, the deliverance of your speech was so heartfelt and powerful, was there any point that you choked up during the actual filming?

With a screenplay of that quality and thoughtfulness, that was the thing that worried me, that when I read that script I knew as an actor I had to go somewhere to that I really hadn’t been before, you really have to dig down deep into your soul. If there is even a scintilla of phoniness about it, it wouldn’t have worked. We shot it pretty quickly, it’s all in one shot and it’s a monologue but the emotional journey was like a tunnel with a light at the end and there was a train coming towards me. I knew that that was going to happen, I just had to go with it and surrender myself to the character. It’s the most fulfilling ass an actor, I thought wow, I never thought I could go there. It has had its cost because I was just thinking this morning, if you could imagine a guy who could fit kitchens and then someone says I’ve got this really beautiful chest of drawers I want you to build, so he goes off and builds the chest of drawers, its great and everyone says wow that’s really beautiful carpenter, now you go back to fitting kitchen units. That’s what it felt like, once I had done that everything else felt like… Oh OK!

Most people will know you from playing historical roles, posing a hulking figure of a man, However, in The Pyramid Texts those walls are broken down and you’re placed in quite a vulnerable position – where do you go mentally to convey such emotion?

I was very lucky that my son, who was in the film very briefly, it was great because he isn’t an actor but was willing to do that. So obviously I used that connection between Father and Son. Even in ordinary life, most fathers don’t tell their children how much they love them. But with this character, he has to tell him how much he loves him.

What was the defining moment that you realised you made the right decision to go with the film?

It was within an hour of finishing the script I knew no matter what I need to do it. Nobody got paid but that was what was wonderful about it, everyone in that crew from the cameramen, the sound guys, the props just everyone did because they loved the script. They worked so hard, that really makes you feel so good, makes you feel part of a family.

What was your reaction when you saw the finished piece?

It was very emotional because it had been quite a while since they had done it. You know if you write something and go back to it two years later and you wonder who wrote that. It was a bit like that like I was looking at it as a third party almost.

Even though a small part, you came back for Trainspotting 2 as Renton’s Father, 20 years after the original – Did you get to spend much time on the set? Did it feel surreal to come back to the story all these years later?

Well, Danny Boyle did phone me and said (Cosmo tried to imitate Boyle’s accent), “Wouldn’t it be funny if Renton’s Dad is someone else, there is only one days filming James” So I said I would come and do it. I spent a couple of days on set with Ewan, that was it. It was surreal to be back, a lot of the guys who were in the first one was in the second one. I see Robert Carlisle and the rest of them every now and again but just to be back up in Scotland was great. I haven’t actually got to see it yet but I hear it’s great. Only Danny Boyle could pull something like that off, a sequel, after all that time with all those different actors, he’s a very very clever guy.

Your career goes back many years with some pretty amazing roles under your belt, including the acclaimed Game of Thrones – What’s been the most challenging role, one you have loved the most?

Undoubtedly it’s been The Pyramid Texts, it’s been hugely challenging. There is nothing that has really come close to that. It’s always interesting to work on big movies, Braveheart and big series such as Game of Thrones because it is rather intimidating, just the very size of the thing. When you walk onto the set of Troy you feel a bit like that size (motions to the size of a salt shaker). It’s great to be involved in those big movies but I think my heart lies with intimate filmmaking, that’s where my joy is. 95% of the films that are produced are garbage, its pap for the masses and the masses don’t deserve that, that sounds like I’m egotistical but I do like to work on projects that have some sort of validity.

You entered the Big Brother house this year, why?

I would lie there at night asking why? why?

1 – I was offered a huge amount of money, I can’t deny that was the main reason but also in retrospect I’m really glad I did it. I wouldn’t do it again but I learnt a lot about myself and I learnt a lot about the media and reality television. The whole zeitgeist of that, I found fascinating and worrying about how far television will go to create drama. In the diary room, after some incident, I said so what is it next? dog fighting? or bear baiting? where do they go? At least now I can speak with some authority on what reality TV is like.

THE PYRAMID TEXTS will be available on iTunes, Amazon, and Google Play from 28th April 2017.