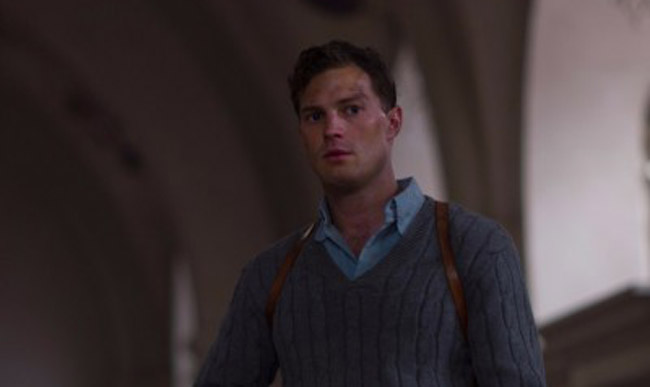 With ANTHROPOID available now on digital, Blu-ray and DVD from January 16th, we wanted to look back at the career of the Belfast-born beauty. Dornan not only gets the hearts racing but is a fairly decent actor to boot.

Based on an extraordinary true story, ANTHROPOID follows the daring plot by two Czechoslovakian agents to assassinate SS officer Reinhard Heydrich, the main architect behind the Final Solution and third in command of the Nazi forces behind Hitler and Himmler. One half of the brave duo is portrayed by Jamie Dornan, former male model and international lust object who is somewhat improbably also earning a reputation as one of the most intense leading men around thanks to an acting career rooted in leftfield choices and powerful performances.

Until writer/director Sofia Coppola’s pop art look at France’s doomed queen came along, Dornan was best known for a modelling career that took in gigs for Abercrombie & Fitch, Aquascutum, Hugo Boss and Armani, even winning the label ‘The Golden Torso’ from The New York Times, for reasons obvious to anyone blessed with the power of sight. His turn as Count Axel Von Fersen The Younger, confidante and friend to Kirsten Dunst’s titular queen, soon had people looking at more than Dornan’s torso, however, and a burgeoning acting career was born. American network ABC has hit the big time with its ongoing series that sees fairy tale characters trapped in small town New England and Dornan further cut his teeth in the show’s first year, playing the town’s Sheriff and former Huntsman (of Snow White And The Huntsman fame). His time on the show mostly saw him cast as the Evil Queen’s plaything before being killed off at her hand. Magic is as magic does, however, and Dornan didn’t let a little thing like being dead get in the way of a triumphant return to the show for one of the 4 season finale episodes.

There probably aren’t many international male models prepared to play quite so far away from type as Dornan has proved happy to do over three seasons of the truly brilliant The Fall. Starring as Paul Spector, a sadistic serial killer with a penchant for predatory, brutal murder sprees, Dornan brings new meaning to the word ‘brooding’ and caused conflict for viewers up and down the country who were at once drawn to and repulsed by a monster who was nevertheless still really sexy. Dornan’s interplay with Gillian Anderson’s police chief Stella Gibson became the stuff of legend, although a fourth season seems unlikely given how events played out at the end of season three. There’s little that hasn’t been said about EL James’ series of bonkbusters. Having started out as a bit of light Twilight fan fiction, the story morphed into a world-beating collection of books credited with bringing the concept of a little light bondage to the drawn curtains of suburbias across the globe. When Dornan was announced as the whips and chains obsessed Christian Grey the world went mad, even more so than it had done when the previous frontrunner for the roll, Charlie Hunnam, was announced. Sure, considered opinion is that ‘it isn’t as bad as it should have been’ and that’s hardly the best starting point, but Dornan’s star remains undimmed and early word on the second film on in the planned trilogy is, dare we say it, surprisingly good. Another leftfield choice for Dornan (no-one would ever accuse him of taking the easy road to Hollywood stardom, to his credit), The 9th Life Of Louis Drax sees him playing a psychologist who is drawn into the life and mind of a young boy left almost dead after a fall. As the mystery surrounding the boy’s situation deepens, the boundaries between reality and fantasy start to blur for all concerned and Dornan shines in another complex performance that shows he has many more strings to his bow than simply being a (really) pretty face. Starring opposite Cillian Murphy (Peaky Blinders, Batman Begins), Dornan delivers perhaps one of his most accessible performances yet in Anthropoid, producing a performance rooted in real life and true heroism as one of two agents who aim to bring about the assassination of the man responsible for the plan to commit genocide against millions of Jews. Alongside the uniformly excellent Murphy, Dornan shines in a thriller that truly delivers both as a top flight movie and as an example of just how far Dornan has come in a career that refuses to be predicted.