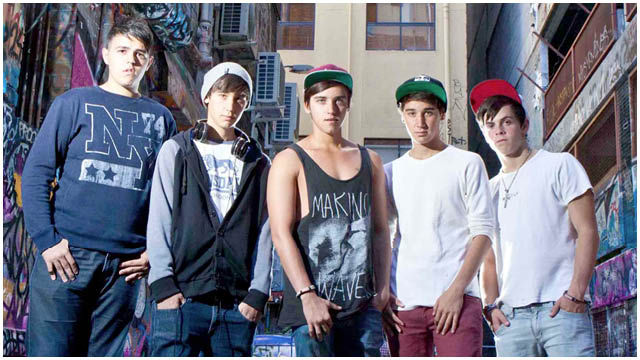 From Youtube to Wembley Arena, James and Beau from The Janoskians talk Janofest and Relationships.

The Janoskians first started out by uploading prank videos to youtube, this soon grabbed the attention of girls all around the world.  The lads have over 1.76 million youtube subscribers and this is still only the beginning.

Are the Janoskians actually performing at Wembley arena? Yes they are!! I can’t believe how far they have come! The teen sensations hit Wembley Arena on Saturday 21st of March.

You were here a couple of weeks ago on a big red bus promoting your latest songs, I actually was in oxford street at the time and it was amazing how many people stopped and listened to you guys.  How was it for you?

James: “ The red bus was such a rush! And seeing everyone running behind the bus, it was just madness! Everyone was listening to our EP while we was playing it off the top of the bus. It was so exciting, it got us all ready and pumped for Janofest!”

Beau: “ yeah it was really fun because it’s the first time we actually released our music to people that were on the streets and to our fans”

So Saturday is Janofest, You’re playing at Wembley arena, how excited are you and what can fans expect?

Beau: “ I’m actually really excited, I couldn’t get no sleep last night, the show keeps running through my head like what I have to do and what I have to bring. The guitar that I have to play! All of us are taking it really seriously but we are all having fun at the same time and the rehearsals are so much fun and we can’t wait to jump across the arena. The fans can expect heaps of different stuff like magic, different songs, rapping! It’s gonna be really fun!”

You have some talented support acts such as Jack and Jack and Luke Friend; will there be any surprises?

Beau: “ so yeah we have Jack and Jack, Luke Friend and a magician. We also have Collins Key! That’s really cool, It’s gonna be really magical. We have a few surprises for the show but we are keeping that a secret!”

James: “ We might have a surprises but we don’t want to give too much away”

A lot of your fans look up to you and aspire to be like you! What advice would you give them to go into a career like yours?

James: “ just have fun and do what you love doing and continue doing that”

Beau: “ and if you’re being yourself people will recognise that and appreciate it! Always be yourself and stick to what you like doing”

So your song Real Girls Eat Cake was a huge hit due to the concept which to be comfortable to your skin. This actually made loads of girls feel more confident within themselves what can fans expect with your new music video Mood Swings?

Beau: “well real girls eat cake was written for the fans and for anyone that needs to feel comfortable in themselves. Our new music is pretty much fun and upbeat! The fans can pretty much expect to get crazy and have fun”.

James: “and that will been shown through the video”

You guys are busy a lot of the time, do you have time for relationships?

Beau: “yeah we do! We have many relationships like It’s really important to keep relationships with all your friends and family because at the end of the day they are the ones that are gonna be there for you”

What’s next for the Janoskians?

James: “ooh we have Janofest that is literally right around the corner and we have some new music coming out soon! And a new music video that comes out in two days called Mood Swings! So we have lots of stuff going on right now, we are really excited because we are doing a documentary that is gonna be filmed on the day of Janofest! So its really exciting for us boys right now!”

Beau: “We are doing some new videos and hopefully a feature film as well!”

I absolutely loved chatting to James and Beau! I can’t wait to see what the future has in-store for The Janoskians!