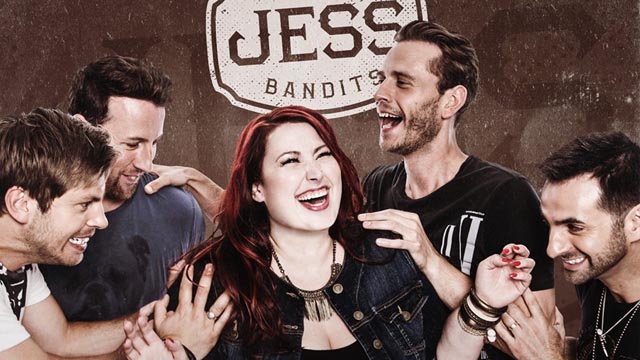 Though somewhat atypical for a group rooted in country to find success in the UK, it is par for the course when it comes to the unlikely group Jess and the Bandits.

The Bandits met BBC Radio 2 favourite Jessica Clemmons, the opening act, during a 2012 tour while playing with The Overtones and instantly bonded over their mutual love of Country Music. As they began to play together more and more, it became painstakingly clear that their chemistry was flawless. Thus, Jess and the Bandits were born.

Made up of brothers Ricci and Louis Riccardi on drums and guitar respectively,Dave Troke on bass, Steven Reid Williams on keyboards/guitar and of course Jessica Clemmons on vocals, each member of the Bandits brings with them a storied history of country creativity. Influenced by their musician father, brothers Ricci and Louis Riccardi were playing country and blues music from a very early age. Whilst studying in the US they learned the ‘Nashville Number System,’ a method of transcribing music by denoting the scale degree on which a chord is built, which they rely on heavily to this day. Inspired by artists like Glenn Campbell and Carole King as well as the Dixie Chicks and Garth Brooks, the brothers returned home to the UK and established themselves as a writing and production team, as well as a desirable group of musicians. They joined forces with fellow bass player David Troke, a musician who shared the same influences and aspirations. Last to join the group was singer-songwriter and keyboard player Steve Reid Williams, whose earliest memory is his father playing ‘Back Home Again’ by John Denver.

Far from home, Jessica Clemmons hails from Houston, Texas, however UK audiences have fallen for her soulful and passionate work so much that she’s become something of an honorary Brit. The country singer got her foot firmly in the door whilst wowing arena audiences on Boyzone’s BZ20 tour, and on other outings from the Overtones to the Stylistics. Jess graced the BBC Radio 2 playlist earlier this year with ‘Single Tonight’, had further airplay with ‘Love Like That’and sent social media into a spin when she performed her show-stopping female take on ‘Wichita Lineman’ on Terry Wogan’s Sunday morning show. To lift a phrase from the irresistible feel-good single ‘My Name Is Trouble’, this country girl can rock your world.
Check out ‘My Name Is Trouble’ here:

“We got a little of that country-rock feel, and then we’ve got those really pretty country ballad sort of songs,” Jess says. “I spent ten days in Nashville hoping to write enough songs, and left with more than I could put on the record. I’m really excited about it.”

These country credentials are especially displayed on the group’s much-anticipated album ‘Here We Go Again’, made in a brilliantly creative flash of writing and recording collaborations in Nashville by Jess. Co-writing all but one of the songs herself, Jess worked with some of Music City’s elite including producer and co-composer Jeff Cohen (The Band Perry, Evan & Jaron, Big & Rich,Sugarland) and arranger Larry Beaird (Dolly Parton, Brooks & Dunn, Faith Hill), who recorded ‘Here We Go Again’ at his Beaird Music Group studio. Clemmons’ other co-writers include James T. Slater (‘My Daughter’s Eyes’), Brian White(Rascal Flatts) and Australian-born Sherrié Austin (‘Never Been Kissed’).