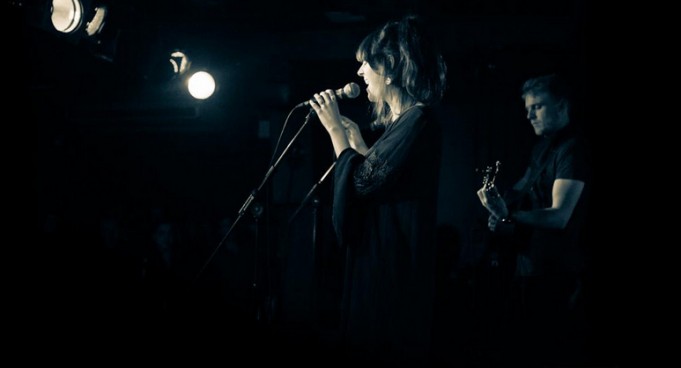 Over the past few months, I was honoured to be asked to be a judge for the preliminary rounds and Semi finals of The Coffee Music Project.  The aim of the Coffee Music Project was to showcase the creativity and talents of emerging musicians while engaging a deep spirit of community among those who share a passion for great coffee and coffee culture.

The proceeds from the live performances went directly to Project Waterfall, a charitable initiative established by The Allegra Foundation to bring clean water and sanitation to the communities which grow our coffee. So far Project Waterfall has raised more than £240,000 and delivered clean water to over 11,000 people in Tanzania and Rwanda.

I decided to sit down with the winners of this year’s Coffee Music Project Winners, Jessica Murae and Ben Colman to have a little chat to get to know them better and find out what it was like to win the competition.

How did you get involved/hear about the coffee music project?

Jess – It was through Twitter actually. I follow the Cameo sessions on twitter and I had never actually performed with them before, heard about it, told Ben. It was the whol acoustic vibe of it that made us thought it was our scene. We hadn’t performed at any of the Cameo sessions before either. When I started out I had emailed them but they hadn’t got in touch. I wasn’t very experienced at that point though so I don’t blame them to be honest.

Did you ever expect to get that far in the competition let alone win it?

Ben – I think in the Semi’s we had a good feeling about it but then once we got the finals and we saw the actual standard of the people that where playing.. I remember when we turned up to the finals, in the soundtrack listening to everyone and everyone had just stepped it up.

How has it felt winning the competition and what have you gained from it?

Ben – We got money, which is going to help with recording, being booked for the Coffee Festivals in London and Amsterdam. If anything for me it’s kind of proved, we started doing this together only recently and just before the competition. By winning it it’s just proved to ourselves that our music has carried across and to know that has given us a new lease of confidence. We know that if we managed to win that competition and our music has been liked by certain people, for me that has been a major point in our career. The prizes are great; I’m really looking forward to the Amsterdam Coffee Festival.

Jess – We’ve got loads of gigs from it anyway, even now just knowing Sam as well who organises so many music events and we get to be involved in that and that’s a great thing for us because previously we were just doing open mic nights in Watford and this has come along and it’s like BAM there you go, Gigs all over the place.

Have you had many gig bookings since the competition?

Jess – We had a gig at the Cafe Royal in Regent Street, London.

Ben – Coffee Arts Project at the Truman Brewery in Shoreditch, the London coffee festival is there as well.

Jess – Where playing at the Cameo sessions on the 5th of May as well and then The Water Rats in Kings Cross on the 18th May. It’s a great venue as well.

Ben – I played there years ago when it was like a rock/indie venue. It still had a great reputation then. It’s a good music venue.

Off the back of you winning the competition you have been booked to play at the London and Amsterdam Coffee Festivals, How you feeling about travelling abroad to perform?

Jess – I’ve never travelled with my music and performing before, but Ben has with other bands he has been in before. I so excited. It’s quite strange actually as I did a poster the other day of all our upcoming gigs in May and it was really cool to see something different like Amsterdam on the poster. My first one abroad and I am so excited. I did play in Thailand once but that was actually travelling that doesn’t count.

Ben, You’ve already played in Italy, can you tell us some more about that? What was that for?

That was with my old band, we did a tour. We met a band in London who we started playing a couple of gigs with. Then we met the guy who was managing them and he asked us if we wanted to go out to Italy for nearly 2 weeks. We went out to a little town called San Giorgio and basically performed every single night. It was tough. Because we were in a band as well it was just like big parties afterwards, I’ve never drank so much beer in my life (laughs). When we played in Italy, for a 45-minute set we were getting paid about 80 euro’s a night plus food and drink One night we got a bit of money and also unlimited drinks. We had to pay for our own flights and stuff I think by the end of it we just about broke even (laughs). It was great fun.

Can you describe your musical style for us?

Jess – Rochelle (one of the organisers of the Coffee Music Project Competition) described us, I think it’s the best description we’ve had. It’s a fusion of country and blues with indie undertones. This is the first time during the project that we actually wrote together. We’ve actually now been working on getting songs together as a duo to get music out there. I think we are definitely going to play on that. When I was playing by myself my style was indie pop. My voice can fit a lot of different things, I did musical theatre for awhile as well and then I sing a lot of Etta James and Billie Holliday. I love singing like Florence Welch, Kate Bush, wacky vocals like that. It’s obviously quite new to work with another vocalist at the same time but we’ve definitely got good feedback from it.

Who would you say are your main musical influences?

Ben – I think this is way we have worked and our music has sounded how it has because Jess comes from big vocals and I’ve come from a rock and blues background and growing to love country music. I also love loads of pop stuff.

Jess – For me its big ladies, I love Stevie Nicks, I love Fleetwood Mac, Kate Bush, Florence Welsh. I definitely take a lot from Kate Bush and Florence I think. It’s quite important to me.

What has been your most memorable and proudest moment in your music careers so far?

Ben – It has to be the Coffee Music Project final, performing at the sold out O2 Islington. When I was 15 in one band I was playing we ended up playing in the Twilight film Festival convention up North which was a good gig.

Jess – To perform at that venue was really cool.

Jess,You have played at Ronnie Scott’s a number of times. What’s it like playing at such a legendary venue?

Jess – It was pretty cool, I got the gigs through a friend of mine who’s a regular drummer at Ronnie Scott’s, he spoke to one of the organisers, I performed there twice and they invited me back, it was all very low-key. It is very loud in there but to just be able to say you have performed there is incredible. I did a performance at 100 club as well, which was actually my first ever gig and Ronnie Scott’s was actually only my second. I was really lucky as I only started about a year and a half ago.

How did you guys team up?

Ben – We met at an open mic night near where we live In Watford, I had just started going down there trying out some of my acoustic material. I was just sitting there and Jess came over to me and said I am looking for a guitar player to play tonight but haven’t got a guitarist with me do you know any songs? So we just starting chatting and we came up with Feeling Good by Nina Simone. We went up not having heard each other.

Jess – We hadn’t even practiced or anything, I was there with a group of friends just to see what it was like there and when I saw him I was just like why don’t I ask him. Afterwards we looked at each other like “hey your good aren’t you” (laughs)

Ben – It was weird as you don’t know what to expect, I know she would be good just because she had the confidence to come and ask for a jam, but at the same time you’re just waiting for her to start singing I wonder what she’s like (laughs). It turned out to be really great. So we started jamming and became more serious. So how long have you guys been together?

Jess – and then we only applied for the competition in January.

Jess – Every time we got through we were like we have to get ready for the next one because you don’t know any of my songs and had to start writing together.

You obviously work well together and your vocals really gel nicely together. Are you guys going to stay as a duo?

Jess – We get on really really well and I’m round yours all the time, his family knows me so well now.

Ben – You get more drive when there are two of you as well. It is nice to have someone else to help you focus.

Your due to release new music at the end of the summer, is this going to be in the form of an EP/Album? Tell us some more about it.

Ben – We are aiming to do, start recording either in June or July or something like that. We think it’s going to be in the form of an EP, Debut EP. We are doing some writing at the moment, just trying to finish the tracks for those. We are probably looking at 4 songs.

Jess – We are off to the rehearsal room after this. I’ve been really really sick. I have to sing tonight.

Ben – We haven’t actually done much because of it, but we hopefully aim to have it finished by the beginning of summer. We are at the very early stages right now.

At the moment, because their partnership as a duo has only been for a few months they haven’t actually got a band name or any joint social media platforms. However, you can follow them individually on Twitter: