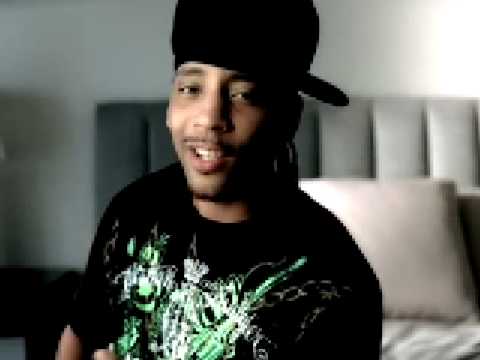 Nahum Grymes, who also goes by the name J.Holiday, received mainstream recognition after his single ‘Bed’ topped billboard charts along with his prestigious album ‘Back of My Lac’. It seemed like he was set to be unstoppable, with some music reporters even describing him as ‘the next big thing’, however, not long after the debut of his second album ‘Round 2’, the 26 year old artist R&B artist disappeared off the radar.

J.Holiday sits down with Flavour to discuss the recent changes he has made in his career, how partying and fame got the better of him and how he is now taking control of his own music.

R: Have you been here before?

This is actually my third time.

R: What keeps bringing you back?

The fans honestly. The R&B love out here is great. Y’all appreciate good music, so as long as y’all come out I’ll come out.

R: We spoke to Ginuwine at the hotel yesterday and what he said is that the UK fans appreciate artists more. Do you agree?

Yes. Way more. We have our places that we do in the states…but I’m sure you guys have artists here that you see all the time. So, when we come here it’s just a different love for what we do. I was actually tired today boy…but you gotta give the fans what they want! We’re going to go to the after party too; we’re going to have fun! [Laughs]

T: You had a major single with the release of bed and your album ‘Back of My Lac’ also did very well, but shortly after your 2nd album things went a little quiet. Why was that?

Well actually at the time I was on capitol records and we just had creative differences. Not as far as the music was concerned but on how to put it out. When you’re in the industry for a while you learn things, so once you learn you start having your own things you want to do. It was just creative differences and sometimes…you’ve got to leave home.

T: So you left Capitol. I hear you’re with Def Jam now? How does Def Jam differ from Capitol Records?

Honestly, they’re going to hate me for saying this but I think a lot of record labels are the same. Now that I’ve actually dealt with Capitol, I just know now how to treat my relationships as far as in the music industry and stuff and how to work with people. Sometimes you’re just going to bump heads and people have to know when to agree to bump heads.

T: This issue of our publication is all about taking control. How important do you think it is for an artist to maintain creative control regarding their music?

It depends on if they write [laughs].

T: Is that the key factor then? Writing?

T: In regards to taking control, have you ever been in a situation in both your personal life and career where you’ve lost control and had to regain it?

T: In what regards?

Just partying. Not being focused…because everyone goes through that phase where you get big, your name is out there, you’re all over the world and partying and having fun and for a second, for a slight second, I just didn’t care.

T: So has that changed now?

Oh yeah now I’m back focused. I’m ready. I’m back in the trenches! T: I’ve got a question for the ladies now. What kind of women do you like? Do you like women who are dominant and take control or do you like a more submissive female?

I like confident submissive. Everybody can’t have control all of the time…

F: Just to touch briefly on your style I see you’re swagged out and all that. Talk us through your trademark outfits. What do you like to wear?

Well I’m from DC so we wear a lot of black, grey and blue. I don’t know why, it’s like in our blood or something. It just kinda happens like that. Honestly, I hate having on something that someone else has on. I’ll never go and buy something because I’ve seen somebody else wear it.

R: Do you want to talk us through your tattoos? I see you’re tatted up.

R: We have to ask you this one question because we’ve asked Ginuwine and we’ve asked Trey. This year will mark the 10th yr anniversary of Aaliyah’s death. I really wanted to ask you what Aaliyah means to you.

[Sighs] She’s missed. You know what I mean? She had a confidence, a swagger…she had a presence. I never met her but from just watching her on TV she had a presence. She was like an angel. Her, Left Eye…definitely missed. Those are the kind of people we need in the industry right now and they’re just not here.

R: That leads us to our last question…Aaliyah and Left eye showed us life is so short. If it was all to end, how would you want to be remembered? What would you want your legacy to be?