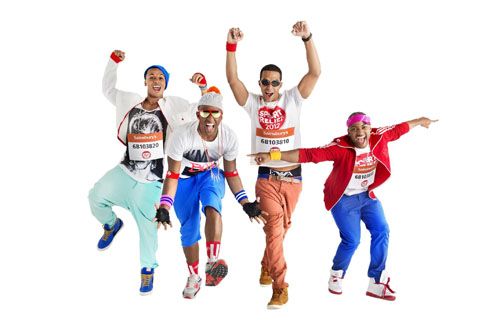 Just a few years ago, the majority of people would have been pressed to even name one popular band who hailed from the X-Factor.  This, obviously, changed following the phenomenal success of JLS. There’s no denying that as a teenager I was just a little bit of a fan.

They were all over every teenage girl’s bedroom and Facebook walls, not to mention their faces printed on duvet covers and on other stationeries. Although they didn’t win The X Factor, JLS have continued to enjoy huge mainstream success since finishing as runners up in 2008.

I was among the few fortunate to have interviewed the boys in 2009 about their debut single, ‘Beat Again,’ which propelled them into a whole new stratosphere of celebrity status: “A lot has happened since 2009…We’re living the dream and everyday we wake-up with a smile.”

These days, Aston is not a shop assistant, JB is not sitting around studying, and Marvin is no longer washing or cleaning cars: “I used to go around to all my neighbours houses on a Sunday… and I used to charge them £5 for an outside and inside [wash].” Oritsé a former restaurant worker is also not washing dishes for a living: “I have got a really powerful [dishwasher] now.” [Laughs]

The first thing you notice about JLS is their genuine chemistry as a band, but what’s their dynamic on how do they all gel together? JB says: “Aston is the joker.” Aston then interrupts: “Don’t think Marvin is this sensible older smooth guy, don’t get it twisted. He is the guy who makes you think that he’s been sensible, but the reality is slightly different.” Oritsé also adds: “Remember that person in school who used to do all the worst stuff but the teacher thought, was the best behaved – that’s what Marvin is like.” Now we can all come to terms with the fact that Marvin is not just a pretty face, but it was clear to see that they all played various roles.

Since stepping on to the scene as a group JLS have worked non-stop. They have sold more than two million albums, their combined single’s sales total above 1.6 million and already they have had five number ones.

One of which was ‘She Makes Me Wanna’ an up-tempo, RedOne-produced dance track, but who was this lady who “made them wanna?” Aston explains: “When I was in the booth singing, it was a multiple of ladies.”

Like many other artists, JLS could have effortlessly slipped away from sight following their early small-screen success. Instead, they launched an influential career resulting with more number ones than any acts that have actually won the X-Factor.

Now they are using their defining boyband influence to release ‘Proud’ as this year’s official Sport Relief charity single. Marvin tells me: “It’s the official song for Sport Relief, which is a huge charity. They help people here in the UK and all over the world. We actually went to Uganda last year in October for a week, and saw some incredible things.

“All of the money raised from the single goes to help some of those people and it’s going to help save lives. So whether people buy the single or come and watch our shows or do their own Sport Relief mile everyone is going to help make a difference.”

Not only does the single offer everything you would expect from a charity ballad but the lyrics are also quite delicate, moving and emotional: “There was pain in every heartbeat, but eventually you built my reserve to be strong. Now I’m hoping, if you hear this, you believe that all that I do is to make you proud.”

They achieved this during their recent visit in Uganda and found that children are dying from diseases that could easily be prevented with a simple vaccine. JB tells me: “When you go over there you see so many things both good and bad… and it kind of hits home what the reality is that people are living through and going through every single day.

“One of the main messages for sport relief and the charity work we do is that no matter how much or how little you have there is always someone out there with less.” As you may know, Marvin recently announced his engagement to Rochelle Wiseman from The Saturdays.

You would expect him to be quivering ahead of his big day, but he doesn’t seem anxious at all: “I am not nervous at the moment. I was nervous when I popped the question…Maybe on the day.” By the sound of things, it seems as if his fellow band members will be arranging his stag do, which they tell me is something he should be nervous about.

“We are performing at Buckingham Palace in front of the Queen…We hope she [The Queen] does a royal wave and a whine at the same time.”

The multiple BRIT Award-winning group are set to play the biggest show of their career. They will be joining a star-studded line-up of musicians to perform at the Queen’s Diamond Jubilee: “We are performing at Buckingham Palace in front of the Queen. It’s a little bit of a challenge but we like challenges.”

They also added: “We hope she [The Queen] does a royal wave and a whine (dance) at the same time.” Just the sheer thought of the Queen dancing had us all laughing in hysteric.

Their recent album Jukebox was a hit, and now they have begun to work on album number four. If it’s ­anything like what they describe, we’re in for a treat: “We are working with Rodney “Darkchild” Jerkins [producer for Michael Jackson, Beyoncé and The Black Eyed Peas], Babyface, Bangladesh and we’ve also been writing with Sean Garret.

“We are taking the next album sound a little bit away from what people are used to. We’re taking it back to old school RnB with a JLS twist on it.”

With that, my time with JLS was over. But before leaving I wanted to find out if they had space for a fifth member… in the shape of me! They responded with a defiant “yes” and reassured me that my request had been noted.

The single ‘Proud’ by JLS is now available to download. You can also catch them on tour now and for more info check out: www.jlsofficial.com