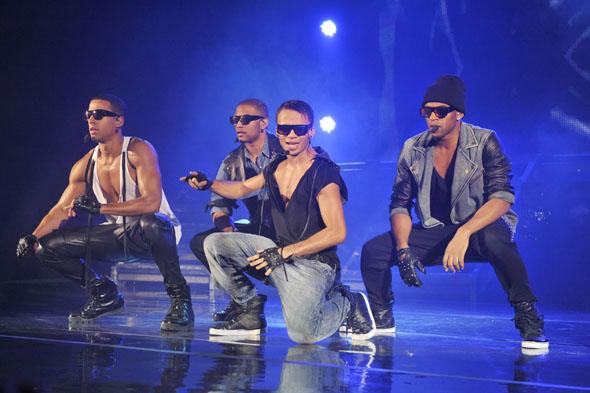 It’s been two years since JLS were seen holding back the tears in wake of their X Factor defeat to Alexandra Burke – my how the tables have turned! Queue the renowned Hammersmith Apollo, a historic venue in terms of music culture where only the greats have performed. JLS, supported by Stevie Hoang and sponsored by Nokia, brought the town centre to a standstill.

The set list included polished renditions of Beat Again, Everybody in Love plus a seamless A cappella version of Shai’s If I ever. Their remix of Rhianna’s popular hit Umbrella was also a crowd pleaser. The show was packed with high energy performances, clean choreography, and even a Michael Jackson medley tribute for the older fans (which perhaps should’ve been abridged), ensuring there was something for everyone to enjoy. Little Aston did his obligatory back-flips and chest flashing combo and Marvin helped out his band member with a few peeks of his less boyish frame which sent the auditorium into a frenzy.

Never forgetting to thank their fans for allowing them to grace such a prestigious stage, the boys where both charismatic and charmingly humble. They appeared to have a genuine affection for their supporters which only added to their appeal. There is no doubt that these boys have studied boy bands who paved the way before them. There were the odd clichéd moments traditional of boy bands such as the suited lament of eluding love to which each boy is clutching a rose (which is later distributed to a lucky fan), the ripping off t-shirts, the throwing of hats and a provoked screaming match between the left and right side of the arena.

Although a work in progress, it is clear that Aston, Marvin, JB and founding member Oritse have what it takes to achieve success which normally eludes reality show contestants. There is no doubt that they have been groomed to fill the void that Blue, Take That, Boyzone and others have left behind – after today’s performance it would seem they are perfectly placed to do so. It just goes to show that sometimes it’s not the winning that counts, it’s the taking part.