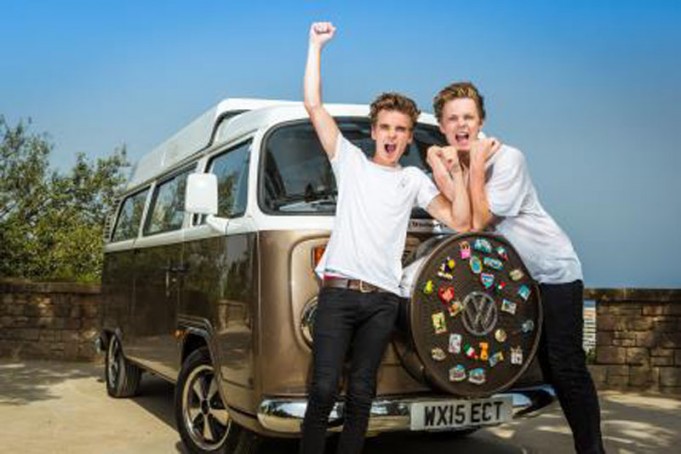 Since announcing the DVD Joe and Caspar Hit The Road Tuesday (1st September) – an exclusive feature-length one-off special for BBC Worldwide fronted by the hugely popular Joe Sugg and Caspar Lee – the title has hit the biggest first day pre-order on Amazon.co.uk of the year.

As well as becoming the number 1 best seller on Amazon, pre-orders for the digital download version of Joe and Caspar Hit The Roadis also number 1 on iTunes.

Joe Sugg says: “The reaction has been amazing, our fans’ support is everything!”

Caspar Lee adds: “Hit The Road wouldn’t have been possible without our fans’ support, we are two very lucky guys!”

This fantastic start to the campaign was propelled into the stratosphere by a reveal video Joe and Caspar posted on YouTube at 7pm last night. The video has had over 1 million views across both Joe and Caspar’s YouTube channels.

Dominic Smales of Joe and Caspar’s management Gleam Futures comments: “We are thrilled with this promising start to what will no doubt be the next stage in a thrilling journey for Caspar and Joe”

Following the video post, Joe and Caspar did a two hour Q&A on YouNow, which got #hittheroad trending and resulted in 75.9 million page impressions and 45.1K posts.

Before the announcement on Tuesday, the project was teased on Twitter under hashtag #projectjaspar from 13th August to excited fans and garnered 367.4 million page impressions and generated 231.3K tweets.

Joe & Caspar Hit the Road will see Joe Sugg and Caspar Lee hit the road on an epic European adventure. Unlike Joe, who used to be a roof thatcher, his flatmate Caspar has never had a proper job or a gap year and he wants to make up for it.  Joe challenges Caspar to survive a road trip around Europe, using only the money they can earn each day.

While Joe and Caspar are on the road, the pair – who have over 10 million YouTube subscribers and over a billion total video views between them – will be offering themselves up for employment in a series of unusual tasks they have absolutely no experience in, such as learning to be gondoliers in Venice, working as deckhands on a super yacht, and performing on Barcelona’s famous Las Ramblas.

Joe & Caspar Hit The Road will be exec produced by Paul Hembury (Top Gear The Perfect Road Trip I and II) for BBC Worldwide alongside Dominic Smales and Claire McArdle for Gleam Futures, and the Director is Brian Klein (Top Gear) for BBC Worldwide.  Joe Sugg and Caspar Lee are producers for Raucous Productions.

Joe & Caspar Hit The Road will be released on DVD and digital download on 23rd November and is available to pre-order now.