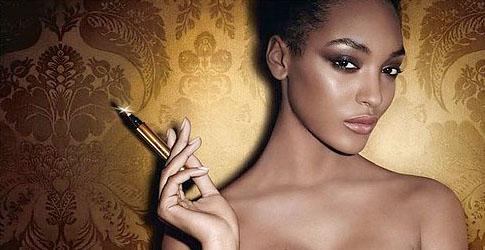 Enchanting and incredibly beautiful are how we would describe 21-year-old top model Jourdan Dunn. She has worked with some of the world’s best photographers, possessing impressive retouching skills… Not that they need it with Jourdan, because guess what? Her skin is as flawless in the flesh.

A lot has happened to the beauty since she was scouted outside Primark in Hammersmith in 2006. Signed to Storm, she has walked for some of the biggest fashion houses in the world – Louis Vuitton and Marc Jacobs to name but a few – been featured on the cover of many top magazines and also taken a short career break to become a mum in 2009 to son Riley. Since her return to the catwalk, Miss Dunn is getting to be a household name since becoming the face of Burberry and winning a cosmetics contract with Yves Saint Laurent. Flavour catches up with the 5ft 10” beauty to talk about motherhood, being compared to Naomi Campbell and whether there is a shortage of black models in the industry…

How are you coping with juggling modelling and motherhood?
I’m so lucky and blessed that I have such a good family and such a good support group and agency. My mum is the best mum ever, like she dropped her job to support me, to support my modelling dreams and look after my son while I’m working. If it wasn’t for her I don’t know what I would do. Thank God for my mum.

How are you both dealing with your son’s sickle-cell disease?
It is tough because you always have to be aware; it’s tough because if he’s in pain you don’t know why he is in pain – is it because he has a cold? Is he in pain or is it because he is miserable? It’s kind of hard, but like me and my mum, everybody at my house is on top of it. He’s healthy, he takes his mediation, he has regular visits to the doctors and he is actually a healthy boy, so we just have to make sure he has his vitamins and he has his medication every day and he will be fine.

Before you were discovered in Primark, was modelling the career you wanted? What would you be doing instead?
If I wasn’t modelling I would wanna be going to a performing arts school and try out acting, because I’ve always wanted to become an actress.

Who are recent clients?
Burberry; in September I did Fashion Week so I was doing a Louis Vuitton show, Gucci, Marc Jacobs. I did about 40 shows.

Is there a need for more black models in the industry?
Definitely, there’s been a rise of more, but I feel we need more. In shows there will be like the odd three black girls, but I feel that there could be at least half from ethnic backgrounds because there’s like 30 to 40 models, so there’s definitely room for more.

How do you feel about constant comparisons to Naomi Campbell?
It’s an honour. I love, I adore Naomi, she’s like my idol. She represents being a supermodel, so being compared to her is crazy, but I’m just Jourdan, I’m Jourdan Dunn not Naomi. Naomi’s Naomi, she’ll always be Naomi and I’m just me.

Have things improved in the modelling industry since the size zero debate?
Yeah, I think it has. I think agencies are being more smart with representing girls and making sure their girls are healthy; if they do see problem they will do something about it. What has been your favourite shoot to date and why?
My favourite shoot would definitely have to be Italian Vogue and when I did the all-black Italian Vogue, which showed Steven Meisel and Naomi in with a bunch of amazing black faces. I felt so good that I actually had a cover and it’s one of those things that’s actually going to go down in history, so I’m really proud of that.
How do you prepare for a big fashion shoot?
I put my headphones in my iPod and listen to some music and zone out; because it’s so crazy back stage: people are shouting, pulling you, tagging you. I just wanna get in my own zone, and as soon as I get to the runway I just kind of rock it.

Which make-up product could you never live without?
Bobbi Brown foundation is the best foundation for black skins; it’s got so many different shades and because black skin isn’t just one tone you can mix and match. I can’t live without my Bobbi Brown.

What are you wearing this season?
A lot of boots. I love boots and they’re in fashion.

Who is your fashion icon?
I like Rihanna. She always takes risks; she’s not afraid to be different.

Would you like a career creating a fashion line like Kate Moss does?
I wanna have my own denim line and find the perfect jeans. Every woman needs a pair of perfect jeans, whether you’re tall, skinny, curvy, pear-shaped or boy-shaped – I want to create that.

Some say Kate Moss is the last of the supermodels. It’s not a tag you hear thrown around as much these days, why do you think that is?
Because on the cover of magazines it’s mainly actresses or singers; it’s not about the models, it’s all about being a celebrity. But I think it’s slowly getting back to what it was.

Many models are plagued with drink and drug addictions – how have you avoided that lifestyle?
I’ve never ever tried drugs. I like to have a drink now and then, but I know my limit, and I know the affects of being addicted to alcohol and drugs and that scares me, so I don’t touch them things.

Worst part about being a model?

Being away from your friends and family, and travelling in a suitcase.

Describe your personal style.
It depends on how I’m feeling. One day I could be feeling like a rock chick, or feminine or girly and I might want to wear dresses, or laid-back; it depends on mood and the weather.

What is the best piece of advice you’ve received and who gave it?
Treat people how you want to be treated – my grandma taught me that.