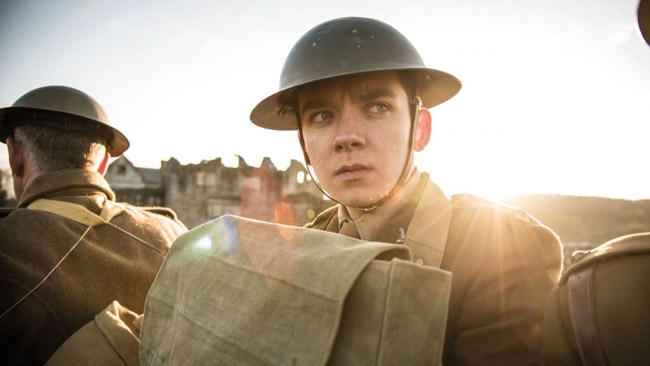 RC’ Sheriff’s poignant war story has been adapted for the stage and film on numerous occasions over the years. In Saul Dibbs latest adaptation for the big screen, we are engulfed in a deeply affecting era of hope and despair on a personal and emotionally charged level. Stripping back to just the essentials and delving deep into the souls of those forced onto the front lines of doom.

Adapted from the memoirs of Sheriff’s own time in the trenches during 1918, Journey’s End plays out more as character study on the men who had to endure such frightening warfare, from those fresh and full of delusional excitements to those who have had to constantly endure death after gruesome death during combat, wondering when their own time to confront their maker will finally come.

Set over the course of four days, the story observes a group of men lead by the mentally tortured, beaten and alcoholic Captain Stanhope (Sam Claflin) in C Company.Posted on the frontlines of Northern France waiting for an imminent German offensive. As time ticks by like a ticking time bomb in the muddy trenches, the narrative plucks away at the characters of a small number of the company. As the viewers window into the story we start with the innocence of the new boy Lieutenant Raleigh (Asa Butterfield). Raleigh is full of excitement and hope for his first assignment in the midst of war. Excited to be doing his duty for his country because mostly he is to be reunited with old school friend Stanhope but it doesn’t take long for the baby faced recruit to figure this adventure might not be quite what he had thought.

In one of Claflin’s best performances to date, Stanhope is a self-loathing man. He is a shadowy figure of pain, and torment who has turned to the booze to numb the terror and haunting memories of the events that have unfolded. His anger only fuelled by the arrival of Raleigh. In a stark comparison, Stanhope’s second in command Osborne (Paul Bettany) is more the father figure of the company. A rational head on his shoulders and supportive, Osborne is one to build the boys back up when the chips are down.

The claustrophobic and atmospheric aesthetics are beautifully gloomy. Capturing not just the mood of our down-trodden troops but the bleak, dank despair of impending attack. Spending almost the entirety of the film in the trenches only enhances the stresses and anguish of the fated men with intimate detail.

This is not your typical war film; the only battles you’ll witness are those the characters endure within themselves.Whilst not having the same budget as Dunkirk, Dibb’s entry in the genre is still on a par with Christopher Nolan’s work. Cast performances are exceptional in Dibb’s Journey’s End. Its closeness of intricate character portrayal elevates its narrative to heart-wrenching heights. It is a touchingly tender tribute to those men who have fallen for gallantly.

Journey’s End is out in cinemas February 2nd.