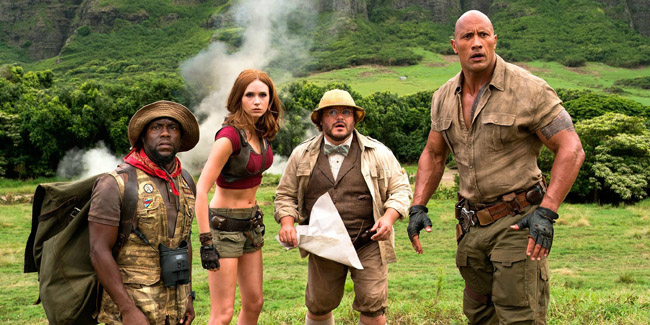 Robin Williams 1995 fantasy adventure, Jumanji, were players are sucked into a board game, was very much a part of a whole generations childhood, so when the announcement came that it was being rebooted for the new millennial’s, trepidation run amok amongst its plethora of loyal fans. Fear not, Welcome to the Jungle does not disappoint in delivering the fun despite its ropey CGI failings.

This time around the introduction sets the scene in the 90’s, the board game has been updated to a video game, and we see a bored Rock type teen being sucked in to the game to never be seen again before we are catapulted to present day were we meet four very different teenagers who are thrown together in detention for one misdemeanour or another. The group are made up of your typical array of social outcasts and the popular cool kids. We have the nerdy, pushover, Spence (Alex Wolff) and the angst-ridden Martha (Morgan Taylor) on one bench and selfie-loving, social media queen, Bethany (Madison Iseman) and American Football Jock, Fridge (Ser’Darius Blain) on the other. It’s not long before the four stumble upon the now dated, video console and game and fire that baby up, with each one picking their in-game characters, unaware of what they are about to get.  Spence ops for Dr Smolder Bravestone, Martha, Ruby Roundhouse, Fridge, Zoologist Moose Finbar and Bethany, Professor Shelly Oberon.

No sooner have they hit the start button, the unlikely foursome are transported into the game and into the bodies of their characters, and they couldn’t be any more different to their human counterparts which causes hilarity all around. Spence lands into the body of the brick house everybody loves, Dwayne “The Rock” Johnson, stripped of his overconfident demeanour, Johnson plays the girl shy, the humble nerd with witty charm and a few Oi Vey’s thrown in for good measure. Fridge is majorly affronted when he discovers his new persona comes in the form of the pint-sized Kevin Hart. Hart, has made a successful career out of being the loudmouth, put-upon one in most of his movies and that’s exactly what we get from him here especially when he teams up with his Central Intelligence co-star, Johnson, who has a lot of fun swatting the ball of pure energy away like an annoying fly on a number of occasions.

Martha is completely transformed into the sexy badass Karen Gillian and Bethany gets a major shock when, in fact, Shelly Oberon is actually a man, a man in the form of Jack Black, who gives a great performance as a young self-obsessed teen who quite clearly develops penis envy, a joke that ever gets old throughout.

As each one has their own special skill, they have to work together to evade the evil baddie to obtain a magical jewel and return it to its rightful home, whilst fighting off killer Rhino’s, Leopards and kicking ass with ninja dance moves, whilst also saving the player that was sucked into the game at the very beginning of the film. Like any game, each character comes with a certain set of lives and they all make sacrifices whether willing or not, if you lose one, they return to the game by plummeting from the sky, miraculously landing on their feet.

Here we have an Indiana Jones style of adventure with a double serving of those pesky body swap comedies that saturated the market for a time in the 90’s. A 20th Century nostalgia feast that will please the masses, it comes away not stepping on the toys of the beloved Robin Williams version and stands on its own as a spunky ball of energetic entertainment, with a whole lot of fun and heartwarming moments.

Jumanji: Welcome to the Jungle is out in cinemas December 20th.