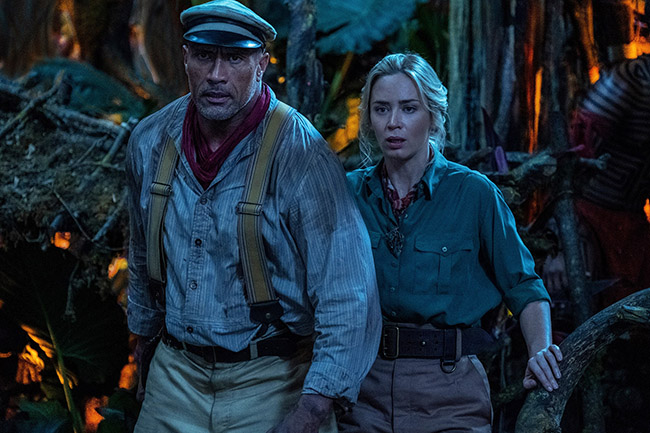 The man-mountain that is Dwayne Johnson and Emily Blunt team up for this whimsical adventure based on a Disneyland theme park ride. Instead of hitting those racing rapids with excitement, you’re left feeling a little jaded and just a bit damp when the thrills never quite emerge.

Set in the early 1900s, the story follows Blunt’s upper-class Lily Houghton, a headstrong scientist that constantly faces misogyny amongst the very heterosexual elite of her peers. Lily’s main aim in life is to get her hands on a Brazilian artefact that activates the ‘Tree of Life’ which will lead to amazing advances in medical science. Having obtained the artefact in true Indiana Jones style, Lily, along with her prissy brother McGregor (Jack Whitehall), ventures to the tropical land.

Enter Johnson’s gimmicky, lovable trickster Frank, riverboat tour guide and to be fair, a bit of a con artist. After the typical meet-cute between Lily and Frank, Lily hires his services (under false pretences) to help them navigate the waters in order to find the Tree, but Frank also has his own motives giving this a Disney twist.

This wouldn’t be complete without a villain and in fact, we get two for the price of one, Jesse Plemons stereotypical evil German Prince Joachim and his large submarine and Edgar Ramirez’s supernatural Aguirre who has an issue or two with Frank. The action all becomes fairly predictable and anyone familiar with the Pirates of the Caribbean franchise would just assume this fits into the canon and could have easily been a spin-off.

The chemistry is certainly there between Johnson and Blunt but –and it pains me to say this – the star comedic turn comes from Whitehall’s McGregor as he flip flops around the action with feminine abandon. Oh yes, McGregor is gay, however, if you blink you could well miss his brief moment of coming out. Embroiled in the action is a bit of romance thrown in for good measure, but it just feels unnatural and a bit icky.

Screenwriters Glenn Ficarra and John Requa never quite hit the mark with consistent fun and thrilling adventure but there is something quite enticing watching two of the most likeable actors having the time of their lives coveting around the rapids and bouncing of insults.