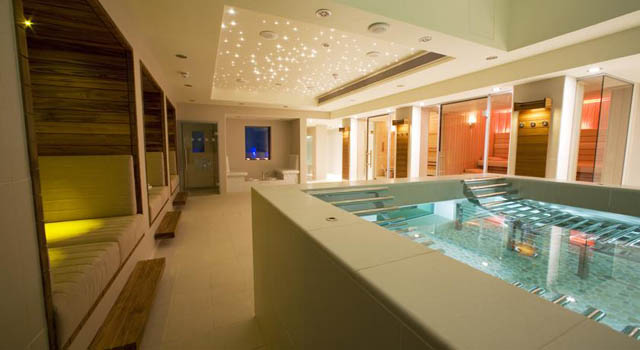 Hotel stay with a glitzy spa, Hells Yeah! Now that’s what I’m talking about. Upon arriving at the K West Hotel and Spa located in Hammersmith, the first thing that took my eye was an unusual and beautifully lit exterior to the hotel. It seamed out of nowhere a glass box had popped up, with white flowing drapes and colourful lights, creating a swanky yet relaxing ambience. As I walked through the sparkling lobby towards the reception desk, I took a look to my right where I could see the ever so chic bar playing an eclectic mix of hip hop to funk. The friendly and welcoming staff, checked us in and we were off to check out the executive double room. This was the biggest bed ever! Not gonna lie I’m pretty sure it could comfortably sleep four. The bed was so big at one point in the night I woke up and realised there was someone else on the other side of the bed, I nearly freaked out, then I remembered it was my other half…….. forgot he was there. Next stop The SPA!!!! One of the nicest spa’s I’ve been to, I find that sometimes in hotels can leave their spa area a little neglected; hot tub out of order, a few cracked tiles, or a bit dated. This spa is spick and spam and totally brand new, it’s not the biggest but they have made wonderful use of the space, the atmosphere is warm and calming, with several seated booths to sit down, have a chin wag or to do some hard core chilling. The hydrotherapy pool was visually spectacular, as I lay on a bed of bubbles I gazed up at a ceiling that shone down specs of fibre glass stars, that gently glistened from one colour to the next, I experienced true bliss. Of course there’s a sauna and a steam room, but what I really liked was Snow Paradise, which is the only one in London. It had an eerie sense of calm I felt like I had just walked through the back of the wardrobe into Narnia. Great experience. Next up was dinner time. It was a lovely ambience but the dinner menu didn’t quite have the wow factor, with an unusual mixed menu to cater to all different tastes, the food was underwhelming. I chose the Thai green curry it was ok but not enough spice; on the other hand I also had a Hallumi burger this was absolutely delicious. I would definitely order that bad boy again, although I wouldn’t go out of my way to eat here. Breakfast on the other hand, YUM! It had everything you would expect; full English, Continental, Danish’s, fresh fruit, all laid out beautifully . I ordered Blueberry pancakes with bacon and maple syrup, it was a great choice I had a massive sugar high after that. Good times!! All the waiters were friendly warm and attentive. The warm service through out this hotel definitely gets a 5 stars. Would I stay at this hotel again definitely. Go to www.k-west.co.uk to book your stay NOW