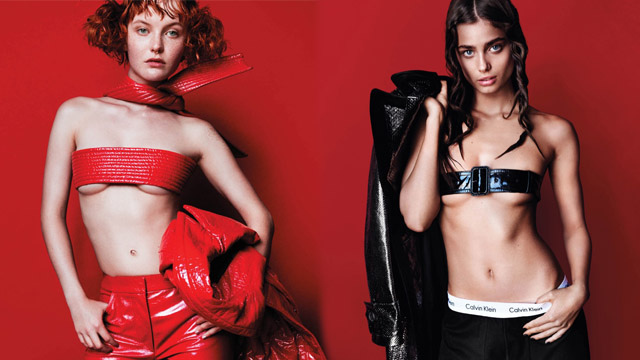 We must admit that these cover shoot are overtly sexy and suggestive and probably nothing like you’ve seen before.

Photographed by Mario Testino and styled by Paul Cavaco the photos see a mix of leatherjackets, form-fitting pants and more for the girls to wear while the boys take on fur touches. The designs of Louis Vuitton, Miu Miu, Giuseppe Zanotti Design and more stand out in the images.

In her interview, Taylor Hill talks about her secret to excelling at social media.

I’ve just learned to be myself,” she reveals. “Social media is a huge part of my life, but I don’t post a steady rhythm of pictures. I don’t post at a certain time of day to get the most views. You learn to live your life with it.

While Kacy Hill talks about her ability and inability to use her voice on social media, fashion and how she go to where she is now,

I am really passionate about women’s rights, and on Twitter, I’ve spoken about gun control, but I feel like with the position I’m in now, it’s like, Okay, you can talk, but not too loud. I don’t want to endanger potential.

Blast from the past: Kacy Hill in American Apparel banned adverts.

Kacy Hill has been the centre of controversy in the past when she modelled body suits for American Apparel which later got banned for appearing to ‘sexualise’ a child.

The banned advert in question was for the American Apparel Lips Print Thong Bodysuit and features four pictures of the product – one with the model’s buttocks showing. The ASA ordered American Apparel to take it down after a customer complained that the model shown looked under 16. However Kacy Hill was reportedly 20 years old at the time.

Take a look at the images below, do you feel that Kacy Hill looks too child like?