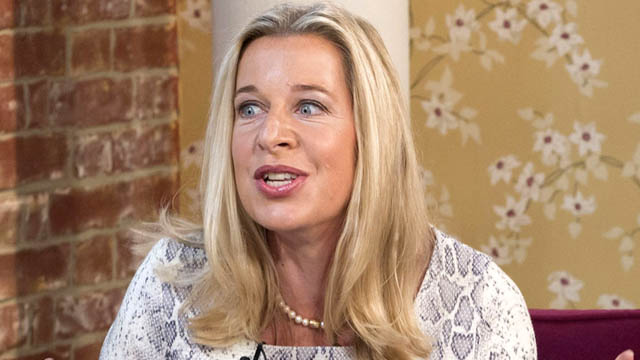 Katie Hopkins has made a television career from uttering some of the most vile, cruel and unsympathetic statements known to man but deep behind that brash exterior I think there could actually be a half decent person.

Notorious for her hot tongued comments and her ability to ruffle a few feathers, the ex Apprentice candidate is someone that few would find themselves agreeing with, so it is with this that I confess my one alliance to the woman who clearly doesn’t think before she speaks.

Like a lamb to the slaughter I want to explain why I agree that ‘there is no excuse to being fat.’ Firstly let me clear one thing up, I don’t agree with this quote 100% personally but I do agree that if you are dangerously overweight then you should do something about it.

Now I realise that there could be many reasons for a person’s obesity; whether they’ve suffered a traumatic experience in life (for many food is a coping mechanism), maybe they’re not physically able to keep themselves active due to an injury or disability, but for those out there that simply enjoy stuffing their faces and flippantly avoiding exercise, you just annoy me!

I’m no skinny Minnie but at my largest I was a size 16, only one size up from the national average of the UK woman and let me tell you… I loathed myself! I rarely felt comfortable, I definitely felt unattractive and I would usually hide my rolls of fat with my handbag . It was this self loathing that lead me to join one of the worlds most successful slimming groups and through perseverance and perhaps a slight obsession I dropped nearly 3 stone in as many months.

This is where I can’t fault Katie Hopkins because it takes guts and bravery to put the money where your mouth is. She gorged on 13 takeaways a day, chocolates, fizzy drinks, curries, cream and chips to deliver a 3 stone weight gain but why? Ok, it was for a documentary in which I’m sure she was paid handsomely but at least she’s proving her critics wrong for channel TLC in My Fat Story. Excuses aside, I do feel that being morbidly obese is a really selfish thing because it doesn’t just restrict your own life but also others around you. The family that grow concerned because of you’re weight related health issue and the children that miss out on getting to play with you for one. It strains the NHS, it strains the taxpayers and its quite offensive to me when I can’t get a seat on my bus because someone’s backside is hogging an extra seat. It baffles me slightly that if I had felt so ashamed a few years ago for being classed as overweight that someone much larger than me wouldn’t feel the same but to a whole new degree.

Maybe I need to get with the times, people are embracing a more robust figure and I’m all for the plus size celebrations but when does it get to the point where it shouldn’t be celebrated? Just like anorexia, supreme obesity is a worrying epidemic and it needs to stop.

I can’t help but wonder if my lack of acceptance towards the larger than life physique is a result of media hypnosis? Call me heartless or blame the media for edging me towards team fit. I tend to eat whatever I want but not without working my bum off for it, which I’ve been accustomed to for most of my life. From a young age I danced relentlessly and that kept me slim, so it wasn’t strange to find me polishing off a packet of cookies.. I guess i had worked up an appetite. As I got older the dancing decreased, the sports diminished and I started to eat more junk food, so I can understand what it takes to keep trim and how easy it is to gain weight.

Unfortunately we can’t all be blessed with the body of a Victoria Secret model or Kelly Brook for that fact but it doesn’t mean we need to scoff the entire biscuit tin like I did as a youngster. All it takes is for some stupid food routines to be changed and for us to move a little bit more than usual to see a difference. It’s not about having money to join a ludicrously expensive gym and it is in no way an excuse to say that healthy foods are unaffordable. Sure we live hectic lifestyles, either you have a job that you’re at more than home or a family that you juggle more than a travelling clown, but just think of the benefits of a healthier you.

I recently visited America and I think it periodically turned me into a fatist. It wasn’t difficult to spot someone having difficulty walking or wolfing down a meal that could quite easily feed an army. Hands up that some of the sights were really hard to swallow and after becoming my own feeder I had to put my foot down and eat something with some nutritional value.

It’s harsh of me to look at every overweight person in the same light but I genuinely believe you can have your cake and eat it too. I still have those wobbly parts but I’m a size 12-14 now and no matter how I dream of a flat stomach, the realisation that I just munched a 5 pack of creme eggs brings those dreams crashing down.

Do you agree with me or do you think I should leave the greedy guts alone?

For tips and tools on how to live a more healthy lifestyle visit: nhs.uk/Change4Life/Pages/why-change-for-life.aspx