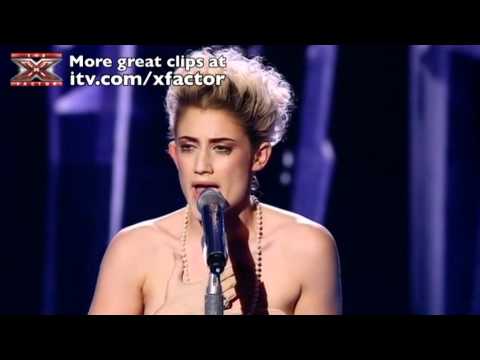 After enduring months of soaring highs and crashing lows, Katie Waissel is one warrior who will not be defeated. The 24-year-old became one of the most controversial contestants on The X Factor in 2010 after revelations about her personal life landed her on the front cover of many newspapers. Like it or not, The X Factor is one of the most exciting, nail-biting and electrifying shows around. However, it is unclear quite how much of the hoo-ha is contrived for publicity and how much is genuine. Despite finding herself in the final showdown four times, Katie managed to survive all four, a record in the show’s history, even making it to week eight, yet her inevitable elimination wasn’t without fuss either. In an online survey of 2010’s most talked-about contestants she was ranked fourth, behind Cher Lloyd and winner Matt Cardle.

Flavour speaks exclusively to Katie about the show, being branded ‘the most hated woman in Britain’ and her upcoming debut album.

How does it feel getting back from ‘reality’ to living a normal life?
It feels kind of weird because you don’t exactly go back to living a normal life. Since the show, it’s been pretty fun and hectic, performing up and down the country. However, I don’t really think it’s gone back to that sort of normality like how it was before. It’s been great now that the schedule is a lot more relaxed – the other morning I even managed to watch a bit of Jeremy Kyle, which was really interesting.

What was it that made you decide to audition for The X Factor?
I just remembered seeing the contestants the year before and was like, wow, they are amazing. I have also been singing and songwriting for a long time, which is always something I have wanted to do.

Your time on the show was very controversial – any regrets?
No, I have no regrets at all. I believe everything happens for a reason; it was an amazing opportunity. There were some low points, but at the same time there were some great highs. I wouldn’t be here speaking to you if I had not gone on the show.

From a receptionist to one of the most talked about X Factor contestants, can you believe how much your life has changed?
[Laughs] It’s sort of mad and a bit strange as it doesn’t seem real to be honest. I don’t think anyone could’ve ever expected half of the stuff that we all went through.

Your experience from the start to the end was incredibly tough. What kept you going?
There was a part of me I felt went on autopilot, as I really didn’t know how to deal with what was happening around me. I think the fact that I had a lot of support from friends and family as well as people on Twitter and Facebook really helped a lot. There were also people turning up outside the studios, showing their love as well as their faith in me as a performer. At times I sort of went away from the show, reminding myself that it didn’t matter who I was and where I came from. I always believed as long as you had that passion then that’s the only thing that really matters.

You were branded ‘the most hated woman in Britain’ – why do you think you were so unpopular?
I have no idea, but I still sometimes ask myself, what actually happened? I mean, that is a bit of a bold statement for anyone to make, as there are major things going on in this world. At the end of the day, it’s an amazing TV show, I had a passion, which was singing, and that’s all I wanted to do. Of course I did not expect everyone to like me, but then to be branded so harshly for following a passion was pretty intense.

While you were on the show you had quite a strong companionship with Cheryl Cole, who has also encountered a lot of bad press. Did she give you much advice on how to deal with things?
To be honest, she was really cool. We could knock on her door any time and she would always be there to give us advice. I was told by a few people not to read what was going on in the papers, but I couldn’t help it as I always wanted to know what was being said about me.

How does all the support from your Waissel Warriors on Twitter and elsewhere make you feel?
They are so amazing. I have got so much love for every single Waissel Warrior. Wherever I go, they are always there to support me; I am really appreciative as they are all good people with massive hearts.

There were a lot of revelations about your private life thrown out to the public, one of which was about your grandmother being an escort. How are you coping with the situation?
I had no idea what she was doing. Obviously, because it was so public it was a real shock to us and everybody else. It’s one of those things where [pauses for a few seconds]… if you have a passion and you’re doing something that you love, then you have got to remain focused. I kept my head down and thought to myself, whatever is going on, I come from a strong and united family. But how does one deal with that? What do you do? It’s one of those situations you could not even write. She’s doing her thing, I suppose, and as long as she’s safe, that’s all that matters to me.

You became quickly recognised for your quirky style and your vintage dress sense. What fashion item or accessory could you not live without?
Ooh, that’s a good question. Well, you can wear the simplest of outfits and really funk it up with any accessories. I have got my ‘bad hair day’ hat on right now, but I am also into headscarves, shoes and safety pins, especially as that biker and punk look is coming back in fashion.

What’s it like performing on The X Factor tour? Are you excited or are you nervous?
We’re all really ecstatic and a little bit nervous to be out there performing in big massive venues in front of thousands of people. However, it’s a great experience and we are all enjoying it.

You’re currently working on your debut album, so what can we expect? Will there be collaborations or covers?
At the moment it is a big work in progress – currently I am inspired by No Doubt’s early stuff. So who knows? Maybe there will be a few collaborations.

The X Factor Tour is currently appearing around the UK