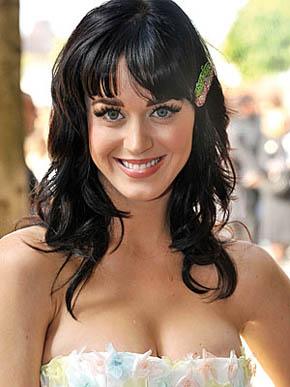 The pop star has always enjoyed rebelling against her Christian pastor parents Keith and Mary Hudson and regularly tested their rules when she was growing up.

She joked to Q magazine: “Some people are fascinated with the idea of a great storyline: good girl, Christian parents, goes bad… My song ‘I Kissed A Girl’ provided the perfect storyline, so it’s entertaining for people. My parents were really strict at first, because they didn’t want me to turn out like a prostitute.

“There’s a button that all kids have with their parents. It’s like this red button that we push. And the paint has chipped off of my red button in a few places because of the constant pushing.”

Katy – who got engaged to reformed ladies’ man Russell Brand in December after a whirlwind romance – is still upsetting her parents now by agreeing to be a part of ‘The Smurfs’ film.

The 25-year-old singer voices the character of Smurfette in the new animated movie – which is based on the 80s cartoon series about the miniature blue-skinned characters – and has revealed her mother and father disapproved of the show when she was a child.

She added: “My parents felt that the Smurfs’ reliance on sorcery and magic was sending the wrong messages to me as a child. But it seems I am destined to push my mother’s red button.

“They stopped me watching ‘The Smurfs’ and I f***ing became one. They banned me from eating sugar and I got sugar. I cannot be f***ing well stopped, baby!”