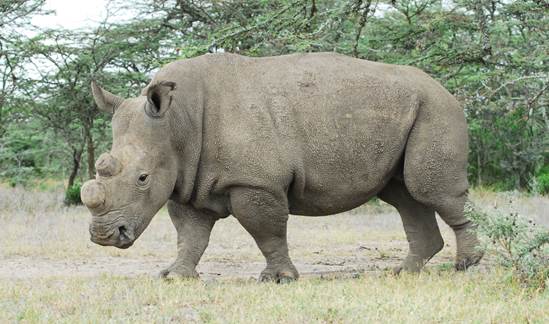 The rhino, named Sudan, has been described as “the Most Eligible Bachelor in the World” by a Kenyan wildlife conservancy and he appears on Tinder in 190 countries and in over 40 languages.

The Tinder profile when liked, will direct the viewer to a page from which they can donate towards the cause: www.olpejetaconservancy.org/most-eligible-bachelor

Sudan is not only The Most Eligible Bachelor, but he is also one of the most protected males on the planet, surrounded by armed guards. Sudan lives his bachelor life at Ol Pejeta Conservancy with his two female northern white rhino counterparts, Najin and Fatu. They have been unable to breed naturally due to a range of issues including old age. However, there are 17,000 other potential female southern white rhino suitors.

The goal of this campaign is to raise the $9 million needed to protect the northern white rhino from extinction.

The funds raised will go towards ongoing research into artificial reproduction in rhinos, using in -vitro fertilization (IVF) to achieve successful pregnancies, and gradually build up a viable herd of northern white rhinos.

So if you are on Tinder and see Sudan, please do swipe right and make a donation, and here’s another website that has a host of eligible bachelors.