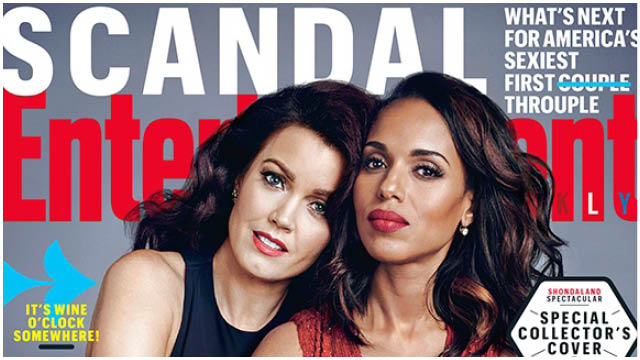 Have you heard of Shonda Rhimes? Sure you have! Shonda Rhimes is the writer of three of the hottest shows on television right now with ‘Grey’s Anatomy’, ‘How to Get Away with Murder’ and ‘Scandal’.

Posing alongside the show’s leads, Kerry Washington, Ellen Pompeo and Viola Davis for the September 11, 2015, cover of Entertainment Weekly. The actresses also get their own covers all photographed by James White.

Kerry says about working with Rhimes,

“I was talking to an actress who’s pregnant and really worried about telling her bosses, and I said, ‘Yeah, when I told my boss I was pregnant, she literally jumped up and down in my trailer.’ I don’t know if there’s a male show­runner who would do that.”

Check out the behind the scenes Entertainment Weekly gallery. Its pretty spectacular.