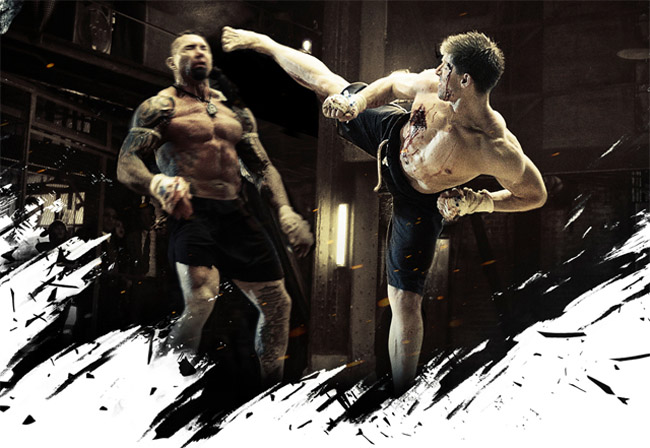 The WWE’s “ The Animal” Dave Bautista and three-time UFC champion Georges St-Pierre, clash with the “Muscles from Brussels” Jean-Claude Van Damme and newcomer Alain Moussi in this revamp of cult classic Kickboxer.

A reboot that is fairly functional as a throwback to the old school Martial Arts movies of the 1980s. But is lacking the dramatic punch associated with the heavy hitters of the genre that came after.

There is a certain type of pleasure to be had from these types of Martial Arts movies, and to enjoy them you need work within the genre.  Kickboxer is entertainingly earnest in its reverence for a type of movie that has been mocked into the ground so much that its lack of winking to the camera is refreshing. Now having said that the film is filled with plenty of moments that are associated with the worst of the genre as well. It is real B-movie material, and a poorly structured schlock fest at times. And for a story built around revenge, it is severely lacking in pacing and direction story-wise. The fight scenes, for the most part, are pretty lackluster, although I did appreciate the physicality and impact that you could feel from some of the punches and kicks.

However, despite all that, I did enjoy the movie. The simplicity of its plot and the pure 80s cheesiness it managed to recreate is kind of endearing. I appreciated that the movie didn’t try to be clever. Sure it was filled with moments that didn’t make sense, random acts of nudity and subplots that were barely explored. Not to mention the worst fake paper mache elephant heads I have ever seen during one fight, that was supposedly taking place on the animals. But Kickboxer did successfully reproduce the vibe of the movies that it was trying to emulate and despite its many faults, it was never boring.

Having to follow the plot of the original Kickboxer, which was a very flawed movie, to begin with, was ill-advised and restrictive. Because one scene in which the movie felt like it came together was in the final gladiatorial battle between Tong Po (Bautista) and Kurt Sloane (Alain Moussi). I wish the movie had focused more on these types of encounters rather than the meandering road it took to get to that point. Bautista is a really intimidating screen presence and genuinely scary as the monstrous bad guy. Alain Moussi, a former stuntman for the likes of Hugh Jackman and Henry Cavill, takes over the role of Kurt Sloane made famous by Jean-Claude Van Damme in this version of Kickboxer, in his feature film debut. And I have to admit although he has the look and did a decent job in the fight scenes, I do think he is lacking in screen presence at this moment in time. Having recently interviewed him, he does seem to have the determination and drive to succeed so it will be interesting to see his development as an actor as the franchise grows. But in the showdown between Bautista and Moussi, that imbalance in acting experience between the two, actually adds to the underdog nature of the encounter. It brings a vulnerability to the character of Sloane, who up until that point had very much felt like a blank canvas.

Jean-Claude Van Damme is another delight in this movie as Master Durand. He swoops around with an Eric Cantona level of charisma in this and is such a joy to watch,

Kickboxer: Vengeance is a flawed, often ridiculous martial arts action movie. But it is filled with moments that harken back to a simpler movie going experience. A time when it was the goofy, testosterone-fueled moments of 80s action cheese constantly on rotation, that affectionately was the subject of many of our conversations.